Nestled in the heart of Cornwall, Newquay has once again hosted the hidden gem of a festival that is Boardmasters. Previous headliners have included Ed Sheeran, Ben Howard, and, last year, Bastille, but this year has undoubtedly marked a huge step up for the festival. With two headliners for each of the three festival days (Friday-Sunday), there is an extra stage, bringing the number of venues to an impressive five, and a whole new area to the festival, ‘The Land of Saints’. Coming with this expansion is a far bigger audience than the festival has previously received. Advancing to the scales of V Fest and T in the Park, Boardmasters is now playing with the big guns. 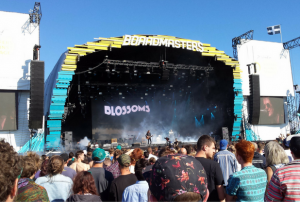 It’s not hard to see the appeal. Clear August skies, two local beaches, surf and skateboarding competitions, a five day camping experience – Boardmasters feels more like a holiday than a festival. After two days of camping, the weather come Friday was blissful as myself and my friends crossed from the crammed and wild campsite into the massive grounds of the festival. Our destination was the huge Main Stage, an outside venue at the centre of the festival, with blissful views over the cliffs to the never-ending ocean below.

We started our day at 2:30pm, with a little-known band, Nahko and Medicine for the People. Describing themselves as an ‘American world music collective’, they fuse various cultural music genres influenced by the diverse band members, to create honey to the ears. Having obsessively stalked Boardmasters playlists on Spotify since I bought my ticket earlier in the summer, I was already familiar with Nahko, but nothing compared to seeing them live. The vibe they created was loved by the crowd, which was admittedly still thin due to their early set time. I would encourage everyone to give them a listen as I was blown away; in particular, a soulful rendition of ‘Love Letters to God’ (“Does she hear them / or do they got lost / in the stars…”) felt like an outpouring of love and emotion in the face of the dark and divided world. 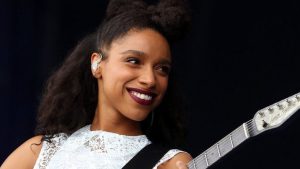 Sticking with the Main Stage to keep our place at the very front of the crowd, we watched Italian-English acoustic singer Jack Savoretti‘s set, before indie pop band Blossoms arrived to rock the stage. It was another great performance, especially when they finished with their iconic and extremely current hit, ‘Charlemagne’. The experience was topped off when Blossoms ended the set by announcing they had just learnt their eponymous debut album had hit number one in the Album Charts. To share such a big moment the up and coming band, right there in the crowd, was a truly unexpected privilege.

Boardmasters should be admired for its devotion to promoting rising stars. Despite a couple of songs I half-know and being aware that she supported Coldplay at Wembley earlier in the year, Lianne La Havas was new to me when she walked onto the Main Stage. I was blown away by her youthful talent – she wasn’t just a singer, as I had been expecting, but her skill with many different guitars, from electronic to acoustic, was great. Though a marked contrast, she was the perfect ‘calm before the storm’ before the mayhem of Catfish and the Bottlemen, the night’s first headliner. 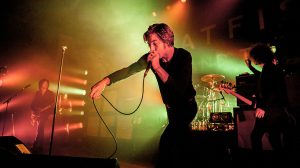 Catfish and the Bottlemen [Image via NME].

Being in the front row for Catfish was an overwhelming experience. I’d seen them before, earlier this summer at Bristol’s Summer Series, and I have to admit I didn’t think they played quite as well this time round; but the atmosphere was undoubtedly far more spectacular. Avoiding mosh pits was impossible and you just had to let yourself get carried by the mayhem, and enjoy classics such as ‘Cocoon’, ‘Soundcheck’ and ‘Kathleen’. Moving slightly back in the crowd towards the end, I nosily watched entertained as a middle-aged man text his son “Can’t believe I’m actually enjoy Cat Fish!” Something for everyone!

The night’s second headliner was Chase and Status, who arrived on stage as the bright sun finally faded into a clear night. Somehow, the crowd became even larger for the electronic duo, and they delivered a visually stunning set, fully incorporating use of the large screens for their performance. Though pretty much everyone I met at the festival raved about them, I cut them short to catch the end of Krept and Konan at the Unleashed Stage. The tented club-esque venue worked well for the late night performances of the weekend, though I found myself deeply regretting leaving Chase and Status for the rapping hip-hop duo. It may just not be my taste in music, but I thought it was a lot of shouting and swearing over nothing – even their famous closing number, ‘Freak of the Week’, felt underwhelming.

The night closed after midnight with Wilkinson at Unleashed, which filled up as Chase and Status closed the Main Stage with the end of their set at 11. From near the back, we enjoyed the drum and bass music producer’s energetic set, and with fatigue from a long and hot day setting it, his iconic ‘Afterglow’ was a fitting end to a breathtaking day.