Read more
You are at:Home»Live»Comedy»Comedian In Focus: Bo Burnham
By Sophie Trenear on July 20, 2016 Comedy, Live

With the recent release of his fifth tour on Netflix, Make Happy, Bo Burnham has been thrown into the limelight once again, acclaimed by critics and adored by his internet cult following. Known for his unique approach to controversial topics like religion, homosexuality and homophobia, white supremacy, and, most recently, stardom and celebrity, tickets to Burnham’s shows have become something of a fantasy to get your hands on, selling out in mere seconds. 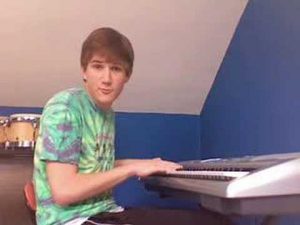 ‘I’m Bo yo’
An early Bo Burnham rises to fame on YouTube.
Image via youtube.com

family when he was fifteen. They became an overnight sensation, and his audience continued to grow as he posted more and more content onto the site, all which were praised for their voyeuristic and homely feel, having recorded them all at his family home.

In January 2008, Burnham recorded a London performance for Comedy Central’s The World Stands Up before signing a four-record contract with Comedy Central Records. His first EP, called Bo Fo Sho, was released online in June 2008 to praise and positive reviews, aged only 17, selling a whopping 20,000 copies in only its first three months. His first full length eponymous album was released the next year, boasting songs like ‘I’m Bo Yo’ and ‘My Whole Family’, the song which first propelled Burnham to stardom. Bo, in an interview with A.V. magazine, said the album contained songs which were mostly similar to those he made in his bedroom and had shared on YouTube as “I wanted it to still have this very small, homegrown, kid-in-his-bedroom feel.”

2009 also saw Bo take the stage with his first tour, the Fake I.D. tour, which was followed by, in 2010, the Bo Burnham and (No) Friends tour. Both were received positively by critics and fans and were quickly followed by Bo’s second album and comedy special, both entitled Words, Words, Words. The album propelled Burnham further up the comedic ladder with singles like ‘Words, Words, Words’ and ‘Oh Bo’ praised for their clever wordplay and slick production, the former even having a music video made for it – a nonsensical, humorous, green-screen-covered 4-minute journey into the nonsensical, humorous, somewhat green-screen-covered world of Burnham himself, which has, as of writing, racked up nearly 12 million views on YouTube. Burnham also won the esteemed Edinburgh Comedy Prize as a result of Words, Words, Words before disappearing for three years in order to create his next project.

In 2013, Bo took to the stage again for his What. Tour, the first of his tours to be shown on Netflix and the first to be 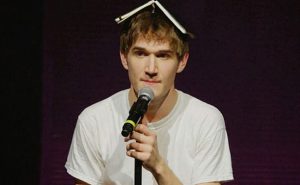 seen by an exceptionally wide audience. What., which also sprouted an album of the same name with the songs performed at the shows, proved to be the beginning of everything for Burnham. Escaping from the boundaries of usual comedy, what resulted was a zany, bizarre hour of theatrical musical, prop and mime comedy, on top of the usual observational material. Within What. he also expressed his love for poetry, having written his own book of poems, Egghead (or You Can’t Survive On Ideas Alone), in his time off which became a New York Times Bestseller. What. received extremely positive reviews, praised for its lightning-quick delivery and timing and unique approach to the material, and has since become the subject of the praise of many teenagers and young adults who relate to songs like ‘From God’s Perspective’ (‘the books you think I wrote are way too thick/ who needs a thousand metaphors to figure out you shouldn’t be a dick’) and ‘Repeat Stuff’ (I’m in magazines, full of model teens so far above you/ so read them and hate yourself, and pay me to tell you I love you’) 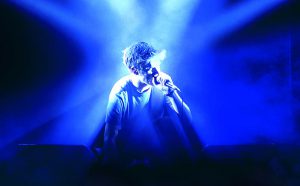 ‘I don’t think that I can handle this right now’
Bo’s ‘Make Happy’ sees him reach new heights of comedy. Image via google.com

Another three years later and the world was craving even more of Burnham, most of his current fans now heralding from his What. era. In June this year, Bo’s latest special Make Happy was released on Netflix, becoming more than a point of satisfaction for his fans. The show turned comedy on its head, ridding the comedian of the cutesy charm and his reliance on his somewhat camp persona and turning up the dial on his more arrogant, self-absorbed stage persona – something which he has covered in depth in previous material. Make Happy resulted in being a commentary on performance and the entertainment industry (‘I’m in the service industry, I’m just overpaid’, Bo remarks), making witty comments and snide quips about everything from Kanye West to white privilege, from Pringles cans to the legitimacy of celebrity status, from what it means to be human to what it means to be happy, all whilst balancing depth and comedy, music and observation, criticism and honesty, expertly. It is by far his most mature work to date, and by further his greatest.

And all this by age 25. Props to you, Bo Burnham; if it only took you ten years to rise to over 170 million views on YouTube, release three and a half albums, embark on five tours, write a poetry book, make a TV show, and, most importantly, gather some of the most appreciative and dedicated fans of any comedian to date, who knows where you’ll be in another ten?

Bo wrote and starred in his own TV show back in 2013, entitled Zack Stone is Gonna Be Famous, but it got cancelled after just one season.

In 2008, Bo met with comedy writer veteran Judd Apatow to begin creating an “anti-High School Musical” film and named the protagonist ‘Bo’ in a “not-so-subtle-hint” he wanted to be in it too. As of 2010, there was no further news on the mysterious parodic film.

What. – the stand-up show

All of his early YouTube videos. They’re hilarious. In a really nice way.