And so the torrential rain continued to splatter down on us from the clouds above, and it seemed the Download campers had begun to forget the real colour of the sky as greyness continued to encapsulate what once was blue, probably. But Download Festival carried on, through the thick and thin mud, and it became increasingly easy to play spot the difference between campers and day goers in between acts – those arriving for the day were often dressed in shorts and thin t-shirts, coming from a far-away land where the sun actually does shine, whilst campers wore ponchos and jeans that were stained brown from the mud.

The rain let off for the start of today, however. The sky was still grey and threatening, but seemed to be holding back a little. Swedish band Avatar took this opportunity with open arms, proving to be one of the best stage openers of the weekend and the first act on the main stage. With a whole host of matching outfits – including bright red socks with baubles – and synchronised head-banging, their set was a terrific amount of fun, if not slightly unnerving at parts. They ended with the wild ‘Let It Burn’ and lead singer Johannes Eckerström finished by saying “we are Avatar, and we just stole the fucking show” – and that they did. 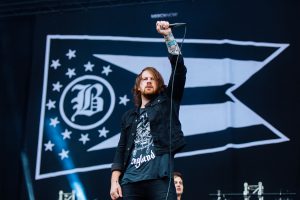 Caleb Shomo of Beartooth confused at the great turn-out to their set. Image via Adam Elmakias.

Beartooth were next to grace the main stage, a side project of Attack Attack!’s Caleb Shomo before he left the latter which turned into something much bigger than he had envisioned. Whilst the set was good enough, it didn’t prove to be as amazing as I had hoped. With Caleb shouting at the crowd, instructing them to make bigger circle pits, scream louder and jump higher almost every five minutes, he seemed to expect more from an audience who didn’t expect much of him, being so early on the main stage. Nevertheless, despite his anger, the set did have its peaks, most notably with their performance of ‘In Between’ which did muster enough passion to be reflected on the crowd, who also threw themselves into one of the best anthem-like choruses of this year’s rock scene.

Over on the Encore stage, Scorpion Child pumped out the tunes of the classic rock elite but somehow still created a youthful, creative sound. It was refreshing to say the least, and went down well with the crowd, most with no clue of who they are (their logo hidden in the upper left corner of their backdrop); they left with a sense of satisfaction drawing over their audience.

On the Maverick stage, Escape the Fate proved to be a nice amount of fun for a half hour or so. One of the most active acts of the day, they ran, jumped and rolled around the entire stage for the entire time, and encouraged the crowd to clap in time every two minutes. Perhaps they deserved a longer set though, with their set-up somehow seeming longer than their actual time on stage.

Back on the main stage, Sixx:A.M. proved to be the very bit of positivity we needed as the drizzle transformed back into the downpour of yesterday and mud was unintentionally thrown everywhere again. Nicki Sixx delivered most of the spotlight from his Motley Crue years to frontman James Michael and guitarist DJ Ashba – ending on a definite high. 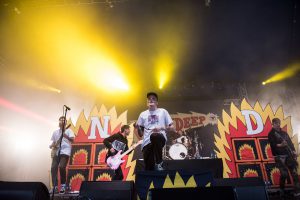 Neck Deep seek to combat the rain with their own burning solution. Image via Ben Gibson

Returning to the Maverick stage, Neck Deep gave an almost unbearably energetic performance with hits like ‘Citizens of Earth’, ‘A Part of Me’ and ‘Can’t Kick Up the Roots’ which fired up the crowd the most. The crowd pushed forward, happy to be in the presence of one of the biggest up and coming pop-punk groups, and one of the only pop-punk bands of this year’s festival.

As Megadeth played the first few songs of their set, it was clear that we were going to be treated to a multitude of classics, with several songs from Dystopia emerging but most from their older, perhaps better, works. And it was those that were the most spirit raising, from a hard-hitting ‘She-Wolf’ to a victorious ‘Trust’. And despite their unexpected cover of the Sex Pistol’s ‘Anarchy in the UK’ tottering on the more terrible side of the realm of live covers, it was undoubtedly lovely to have Nicki Sixx join the metal veterans on stage for it, reminding us of the triviality of old rivalries. Closing with ‘Holy Wars’, the band ended with the power they have been grasping at for years.

There was something vaguely trance-like about Deftones’ set, something I just didn’t get into. With every song seemingly blending into the next, it reminded me of something similar to any recent Nine Inch Nails gig – tiring and sedative-like. Luckily, the time that many of the day-goers had been looking forward to was finally at hand: Black Sabbath’s final ever Download appearance. As the sun set and a cloak of darkness fell over the arena, a line of fire ignited the stage and church bells echoed over the crowd, who fell deathly silent before erupting into a roaring cheer as the founding fathers of metal made their way onstage. 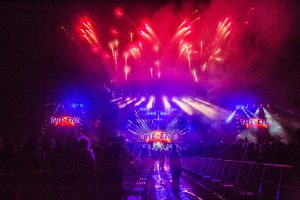 Black Sabbath are very explicit about wanting the crowd to leave. Image via Jen O’Niell.

With a set thrown out to catch as many fans as possible – both the loyal diehards and the casual guitar-hero players – classics were thrown here and there and the light-show proved to be even better than Rammstein. There’s something hypnotic about good ol’ Ozzy, still rocking as hard as he can at the age of 67, even if that means traipsing around the stage slower than any of his predecessors on the main stage. As he bowed to each member of the band, calling out to the crowd to cheer for them individually, it’s hard to believe that less than a decade ago, Ozzy and guitarist Tony Iommi were fighting in court. And if this is the way Black Sabbath go out, at the beginning of their final world tour, they’ve done it with absolute grace and a legendary trail of influence behind them. Props to them.