As both day-ticketers and weekend campers hurried through the gates of England’s biggest rock and metal festival, held in Donington Park, a mixture of excited, frantic and somewhat hesitant faces made up the crowd slowly moving forward through bag check. Excited patrons looked on in awe at the scene before them, the main Lemmy stage looming over the entire field, with the Maverick stage and the Encore stage on either side, and a multitude of food and merch stalls lining the park’s circumference. The frantic patrons sped towards the various stages to secure their place on the barrier for the entire day, no doubt content to wait in one single space for ten hours to be as close as humanely possible to the day’s headliners Rammstein, or All Time Low, who closed the Encore stage. Those who were more hesitant were soon lost in the crowd, no doubt their fears and uncertainties also lost in the excitement.

Friday was the day that Download 2016 kicked off, as well as the flood warnings. The glorious sunshine and blue skies of the preceding days vanished, replaced almost instantaneously by mud baths and downpours to rival Noah’s Ark. But that didn’t worry these festival-goers; it seems only fitting that one of the most iconic British festivals of the year had the most iconic British weather as a side order. 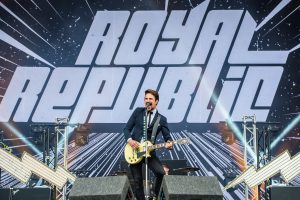 Kicking off the main stage, Swedish-born band Royal Republic were fortunate enough to open to a dry enough crowd, their set only just missing the three-day downpour. Their crowd was surprisingly large, with more fans roaming around than on previous Download Friday lunchtimes, but it was Japanese J-pop/Metal crossover Babymetal who drew in the first big crowds of the day. Delayed slightly because of the weather, shorts and sunglasses became wellies and waterproofs as fans waited for the acclaimed three-piece, who recently won the Kerrang! Award for Best Live Performance. Calling incessantly for more and more circle pits, songs like ‘Gimme Chocolate!!’ and ‘Road to Resistance’ proved to be an exciting distraction from the rain as fans were drawn in by the hypnotic group. Next time Babymetal are invited to Download, here’s hoping their appearance will be higher up the bill.

Over on the Encore stage, Glassjaw made some kind of attempt at an engaging performance. Having not released an album since 2008, they drew a sparse and unenthusiastic crowd; most people on the barrier were only waiting patiently for the more popular Twin Atlantic and All Time Low. Perhaps sensing this or just having very little stage presence, the group chose to play more to each other throughout the set, alienating and frustrating whatever audience they had, and causing many to drift off towards the nearby stalls which proved to be of much bigger interest.

Next up were Twin Atlantic, one of the highlights of the day, whose set was amassed with technical difficulties. The Glasgow-born four-piece didn’t fret though, as they performed stunningly to one of the most fervent crowds of the day – and to their apparent surprise, as lead singer Sam McTrusty continuously expressed his gratitude between nearly each and every song as the rain thundered down. Performing crowd favourites like ‘Free’, ‘Heart and Soul’, and ‘Brothers and Sisters’, the band ended their set with the most passion and exuberance of the day so far.

It was a while until All Time Low’s set, so we headed back over to the main stage, fittingly named the ‘Lemmy’ stage after the rock legend’s passing earlier this year. As no one knew what to expect from the space of what would have been Motorhead’s set, we were treated to a touching video of Motorhead’s previous Download appearances, together with clips of interviews with rock icons such as Dave Grohl and Metallica. And although nothing could replace an actual live performance from the band, this was a fitting tribute which proved to be better than any other idea. 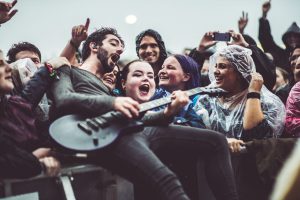 Back on the Encore stage, All Time Low finally ran on stage to the biggest cheer of the day. Going up against headliner Rammstein, the band clearly knew they had to pull out all the stops for their set, which clashed with the German six-piece. And they did exactly that, throwing themselves into recently released anthem ‘Kids in the Dark’, which had the crowd immediately united and the fire cannons immediately utilised. With the exception of Fall Out Boy’s performance at Reading Festival all the way back in 2013, I’ve never seen a stronger start to a band’s set, and it was frankly, wonderful to see how much effort the Baltimore born group put into their Download set.

Without a single dull moment, ATL’s set was all rise, playing their biggest and best hits from the newer ‘Something’s Gotta Give’ all the way to the older ‘Lost in Stereo’. There was no song lacking in the anthem realm, and there was no moment lacking in pure ecstasy. If a band can interact with their audience well enough then their set is made from the very beginning – which is exactly what All Time Low did. Interacting with each other and the crowd with guitarist Jack Barakat’s usual vulgarity, the group also picked several fans near the front to join them on stage for ‘Time Bomb’. I might be biased in saying this was the highlight of the day, if not the whole weekend, as I was one of the fans picked (a terrifically surreal experience to say the least – I’m still in shock writing this, if I’m honest), but it was a dream come true for every person picked who frantically climbed over the barrier, seemingly not caring about the muddied floor they would fall onto.

Finishing their set with a cover of Green Day’s ‘American Idiot’ and their own ‘Dear Maria, Count Me In’, the pop-punk heroes waved and ran off stage to the almighty cheers of their fans – both the old and those who just popped by to check out the fabulous light-show and pyrotechnics and were drawn further in.

Catching the rest of headliner Rammstein’s set back on the main stage, it was clear that they knew exactly what we wanted. Fire, lights, lyrics only a few there will understand, fire and of course the heavy, pounding riffs that make Rammstein… well, Rammstein. And did I mention the fire? Rammstein sure love their pyro, even setting off actual fireworks which collided, or at least seemed to collide, with parts of the stage. All together it was a pretty stunning set – you were really at a benefit being further back in the crowd to appreciate the visuals. And if you didn’t get your eyebrows burnt off in the process, you did it wrong.

Download 2016’s first day really gave the weary and the wet something to grin about and by the end of it, I doubt if even one person was more concerned with the mud than with the day ending. With some of the most impressive sets I’ve ever seen, the day ended on a high – and we still have the rest of the weekend to look forward to! Hesitancy just isn’t a word any of these rock fans are familiar with anymore.