Following on from the very successful first Alternative Fresher’s Party last year and the Summer Festival in June, Monte Bar was packed once again for this year’s event.

Jointly organised by the Rock Society and the Live Music Society, the free event attracted a diverse range of students, with both freshers and continuing students in attendance.

Despite some difficulties and setbacks, including a lack of necessary security provision, RockSoc and LiveSoc pulled through, organising and running the gig to an impressively professional standard.

First to hit the stage was Elias Martell, an alternative/rock/folk/blues band from Fleet. Wearing striking colours of red, black and white with top hats, they kick started the lively atmosphere by involving the audience, getting them to clap along to their songs. 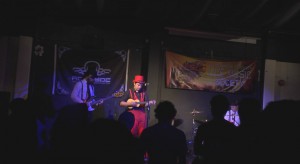 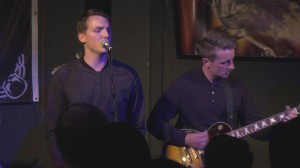 Stars Don’t Shoot, a pop-punk band, played their first gig at a Live Music Society event in December 2014. They were particularly popular with the audience, performing a mix of their own songs such as ‘What the Hell’ and covers such as The Killer’s ‘Mr Brightside’ and ‘Teenage Dirtbag’ by Wheatus. 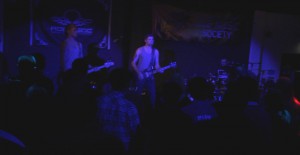 As the time for the headline act approached, more people filed into Monte Bar in front of the stage to the sound of music from the LiveSoc CD. Echoic, from Reading, are an alternative rock band with a strong voiced lead singer capable of reaching various pitches. Along with their own songs, their rendition of Justin Timberlake’s ‘Cry me a River’ was recognisable, yet Echoic had made it very much their own style. Encouraging the crowd to jump to the rhythm of their songs, their music and performance style very much echoed some of their musical influences including Muse, Jeff Buckley and Linkin Park. 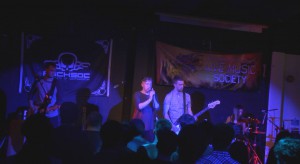 They announced that their first upcoming UK tour is both beginning and ending in Southampton, and that they will be playing for free at The Hobbit Pub on 10th October.

“Tonight has been really incredible, the vibe was really positive. I would definitely come back here. I started music in a youth club, but was influenced greatly by rock legends”.

“After last year’s success the pressure was certainly on. Members of both committees had given up whole days to see this event through, and I think it totally paid off.”

“I am proud of everyone who worked hard to produce such a great gig, RockSoc, SUSUtv and SUSU tech. I am proud to lead such a fantastic society like LiveSoc.”