Read more
You are at:Home»Live»Review: The Great Gatsby Dinner Dance at The Cube, SUSU
By Jenni Derrick on October 5, 2015 Live

What says 1920’s more than a swinging jazz band, glammed up guys and dolls and a chequered dance floor? Nothing! SUSU went all out on October 2nd to transport ticket holders back to the prohibition era and created a fantastic night of music, dancing and food! 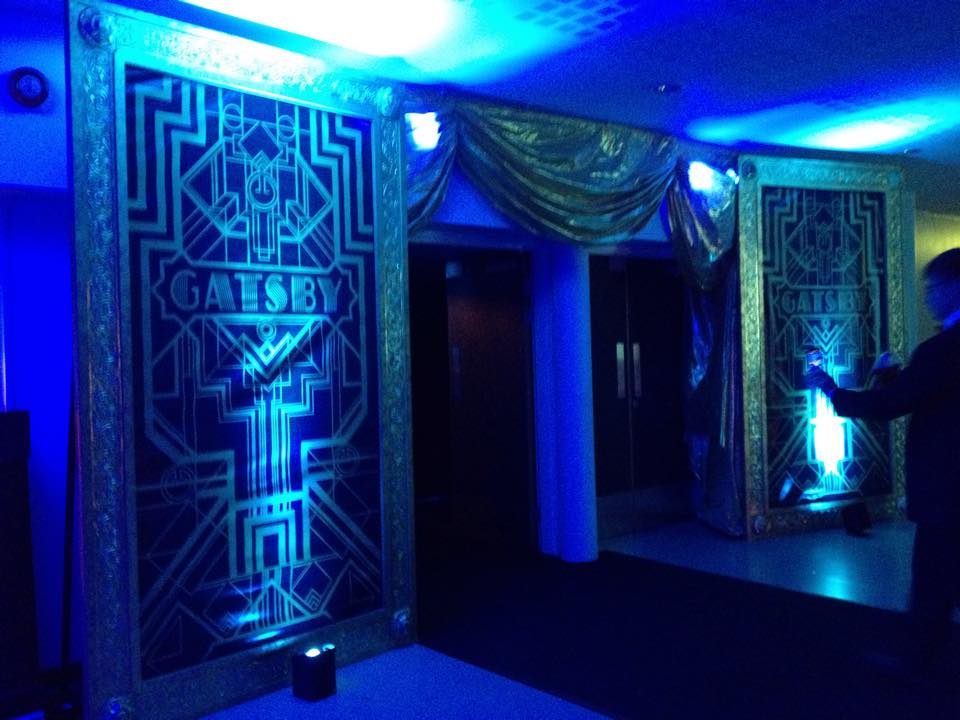 Entrance to The Cube

On arrival we were let through the ropes to the tastefully decorated bar area; a black star-lit curtain hid the food prep area and created a clandestine atmosphere, whilst the blue LED standing tables added class to the whole thing (though they could have done with a bit of a wipe over).

As girls and guys began arriving it was clear they had taken the night’s theme to heart: flapper dresses, headbands, suspenders and bow ties galore! Fair play to the guys who looked dapper, but the dresses stole the night, some going for short, fun flapper dresses, others for longer, classier evening gowns.

There were murmmered ‘oohs’ and ‘ahs’ when we were led into The Cube, tastefully kitted out in black and white with gold and silver accents. It was slick and elegant and simplistic. The balloons used as table centre pieces became rather deflated as the evening wore on and got in the way a bit, but certainly added sparkle to the room. 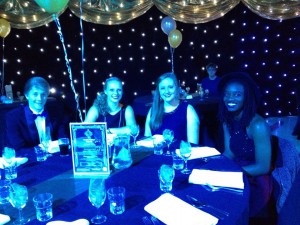 Kind Freshers, Ben, Zoe, Lucy and Gwendoline who invited us to join their dinner.

We were non-diners to begin with and so sat at one of the four non-dining tables, which had a great view of the stage. It became obvious that many ticket holders were not turning up for both dining and non-dining, which was a shame because they missed out on a great evening and it made the room feel a little under-populated. We were kindly invited to join a half empty dining table by a group of freshers.

The meal consisted of ‘a fine selection of Hors D’Oeuvres’ including, rocket lemon and ginger shots, cheese gougeres, smoked haddock mousse in a pastry case, and devilled eggs. The cheese gougeres were all-round favourites but in general the starters were great, full of flavour and just the right size.

We had quite a bit of a wait for the next course, ‘a delectable selection of mini desserts’, though the entertainment was so good we almost forgot we were supposed to be eating! The desserts, when they arrived, were very tasty, the key lime pie could have been a bit more limey but the chocolate tart and the Mississippi pie were fantastic! My only complaint is that they were too small! I could have eaten a tray of those!

In general the meal went down a treat. My fellow diners thought it good value for money and rated it a 7.5/10 – I would have gone a littler higher myself! 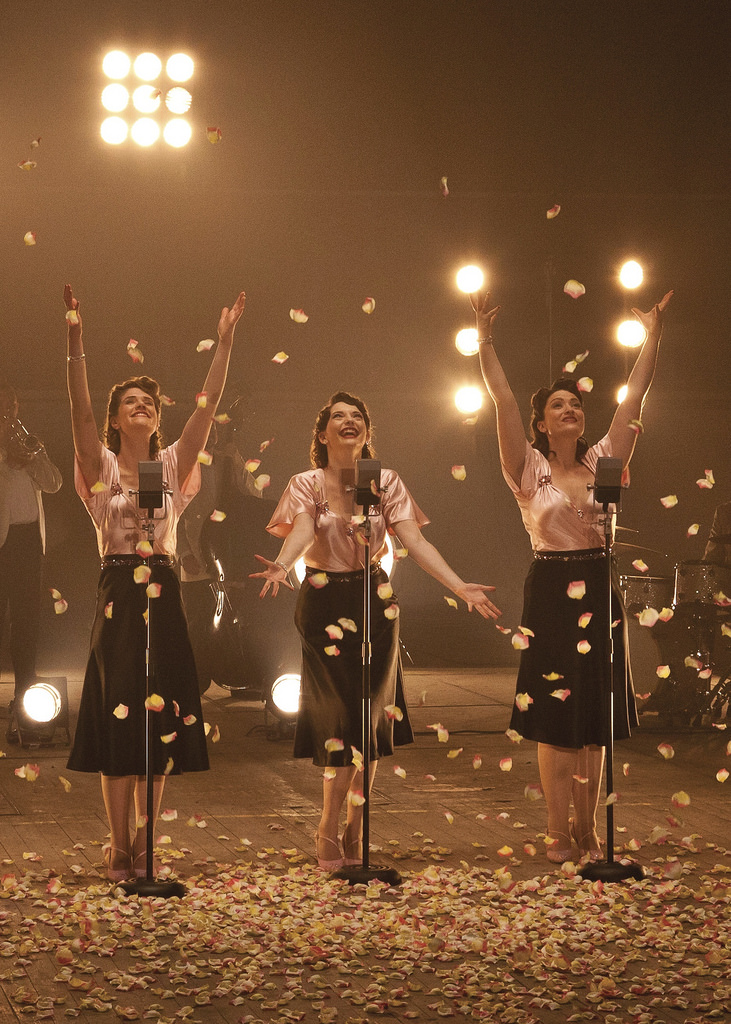 Throughout our dinner we were treated to the musical stylings of the Pink Champagne Sisters, a swing trio of outstanding calibre and their jazz band. Their set spanned the decades, playing classic jazz hits such as ‘Boogie Woogie’, timeless classics such as ‘Get Happy’ and modern tunes including ‘Valerie’ and ‘Mercy’. The vocal talents were amazing, though sometimes drowned out by the band, particularly during solos. The band themselves were equally great, during a cover of ‘L-O-V-E’ by Nat King Cole they really shone. I was gutted when the set ended. Going out with a bang they performed ‘It Don’t Mean a Thing’, which finally got everyone up and dancing.

If I could change anything about their set it would be making it longer and perhaps moving it after dinner so you could get up and dance without worrying about knocking into waitresses or your food getting cold!

To follow such a phenomenal act is hard but the DJ tried his best. He began with older jazzier songs such as ‘Blue Suede Shoes’, which got people jiving and swinging after dinner, before moving onto modern tracks including ‘Bills’ and ‘Titanium’. I personally think it would have been better to stick to the theme and play older jazz and jive tracks but the dance floor was packed and everyone seemed to be enjoying themselves.

He finished off the evening with classics from our childhood school discos, ‘The Casper Slide’, ‘YMCA’ and ‘Crazy in Love’. The dance floor, indeed the whole room, had emptied considerably after this only a small group stayed for the final track of the evening ‘Don’t Stop Me Now’ by the legends that are Queen.

It was a sentiment shared by us all on the dance floor but not by the SUSU staff who had begun striping the tables and removing chair covers a good fifteen minutes earlier, meaning we felt obliged to hurry off after the song.

In all it was a brilliant evening, well themed and well carried out. It’s a shame we had to return to the current decade!