The Godfather is still peerless in all of its facets. Potentially the best acted film of all time, its atmosphere is addictive.

Half a century ago, an American film was released that changed filmmaking forever. The Godfather was lightning in a bottle, capitalising on superb reviews to become the highest grossing film ever on release. This three-hour, dour toned crime melodrama, filled with violence, domestic abuse and a cold central character, won audiences over in droves. It is still considered one of the greatest films ever made and is responsible for higher ticket pricing, the legendary careers of Al Pacino, Robert Duvall and James Caan, the revitalisation and popularity of the gangster genre and of course its equally beloved sequel, which proved follow-on films could be just as good. With a 4K cinema release to celebrate its 50th birthday, The Godfather is still as effortless as ever.

The plot, such as it is, barely needs describing. Vito Corleone (a magnetic Marlon Brando) is the patriarch of a powerful, family-based Mafia in New York. He has three sons, Friedo (John Cazele), Sonny (Caan) and Michael, the youngest son (Pacino) who has just returned from World War II as a hero. Robert Duvall is Tom Hagen, Vito’s adopted son and lawyer. Once Vito is taken out of the action, it is up to his sons to lead the organisation, launching the initially resistant Michael into a downward spiral of violence, lies and emotional castration. 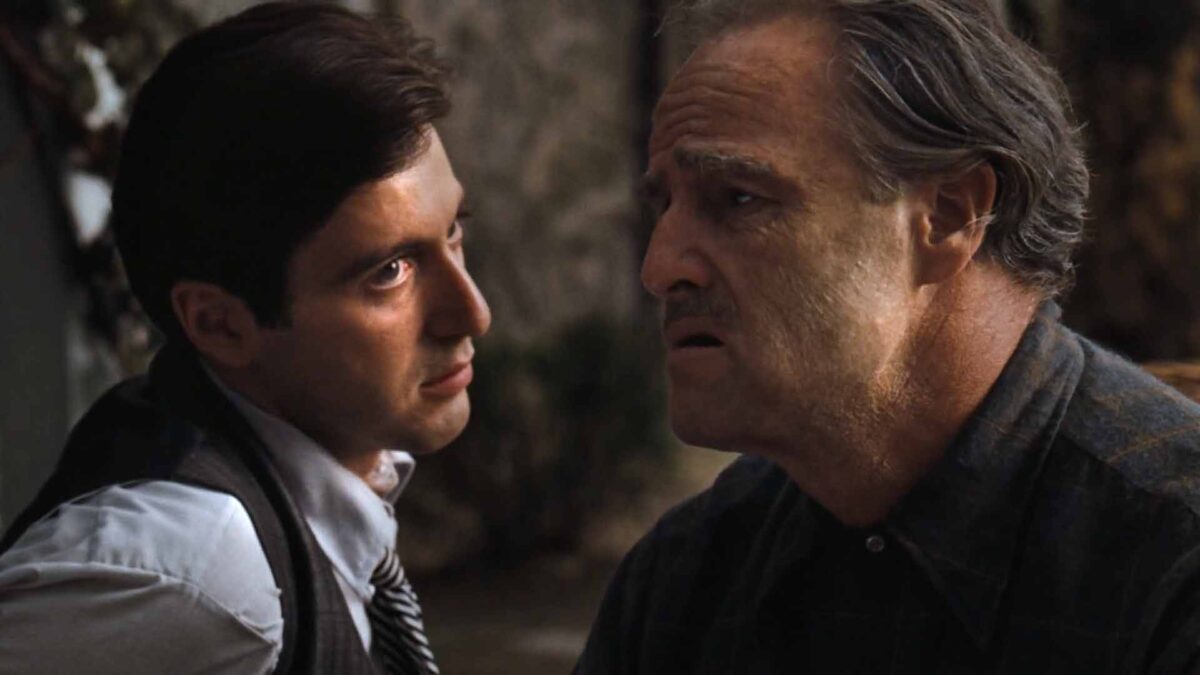 The plot is largely irrelevant as The Godfather is, above all else, a character piece. Where The Godfather works where other gangster films like Goodfellas and Casino don’t, is in its ability to evoke compassion for its criminal characters. Vito is shown to be widely respected and feared, but he is also comforting and eloquent; he never swears or loses control. We are introduced to him playing with a cat, evoking his attuned emotional capacity. As a family man, he is loving to his wife and children, and dies from a heart attack playing with a grandson. Vito wants Michael to be better than the family business; to use his war-hero status to become a senator or politician and enact positive, legal change. His look of disappointment when he is told Michael has killed two people in a restaurant (in one of Pacino’s best acted scenes) is deeply felt. Brando is superb, but Pacino quietly grows in the shadows. His eyes are deep and vacant, constantly thinking with that immobilising stare. When he snaps, it feels far more arresting than Sonny’s violent outbursts. Always fear the patient man’s temper. Michael sinks deeper into the criminal underworld, manipulating and executing with total ease. When guarding a hospital, his hands are still and functional, juxtaposed to the shaking hands of the man next to him. Michael is no stranger to violence; his time in Europe has shaped him to be the family Don more than any of his brothers. 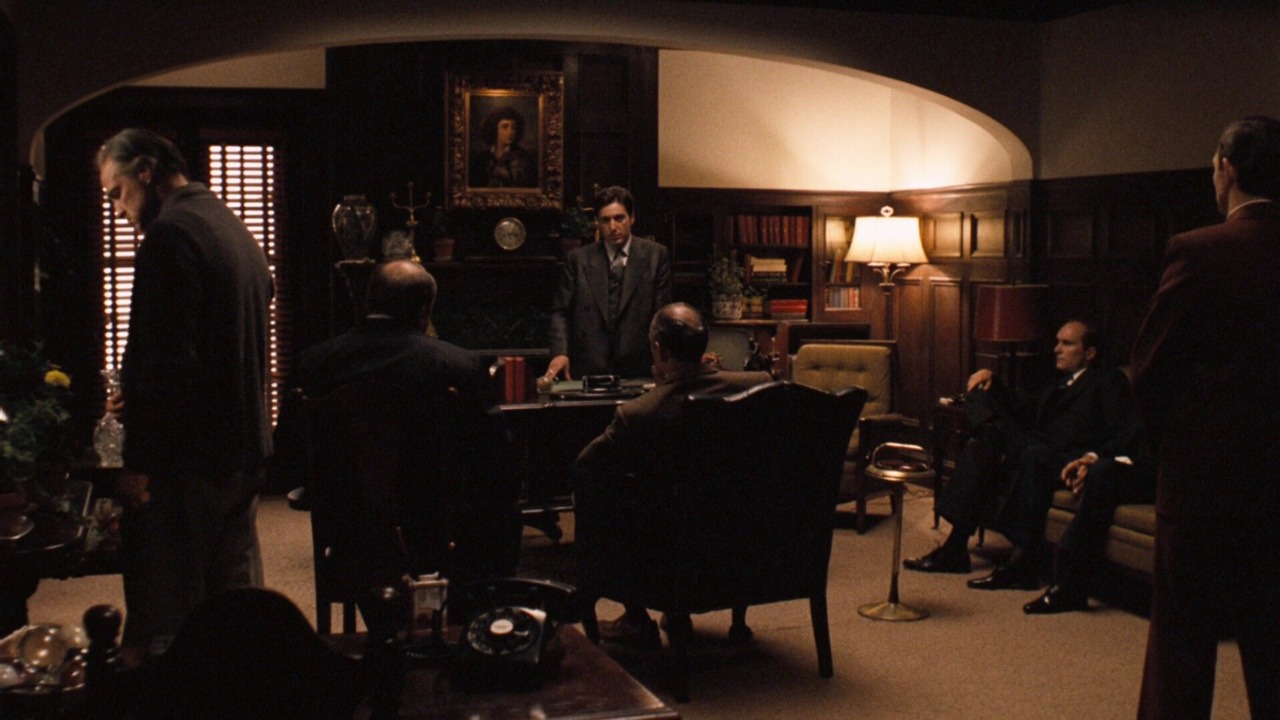 Every character is inhabited by the actor. Duvall especially is the spine of the film, giving an understated performance that grows with likeability on every viewing. One of the best segments of the film would be cut were it made today: the ‘Tom Hagen Goes to Hollywood’ section. Here Tom is sent to LA to talk to a producer, accompanied by slow fades and a total sense of relaxation, culminating in the thrilling discovery of a severed horse’s head. The scene has no impact on the rest of the film, and Tom doesn’t change as a character from this, yet it is simply magnificent.

The Godfather could certainly be a shorter film. Through the lens of a modern producer there is ample to be cut: Vito would have a shorter role, the Sicily sequence would be axed and Freido would not exist. Even Nino Rota’s achingly beautiful score is out of touch for a conventional gangster film and would be replaced by a 1950s jukebox. But these are all so essential to the film’s themes: with Sicily we see Michael, with his bruised face acting as a brand of exile, retrace his father’s footsteps before he became Don Corleone; in Freido we get more brotherly drama to ramp up the sense of family and the music is elegiac and sweeping, converting it from family drama to epic. 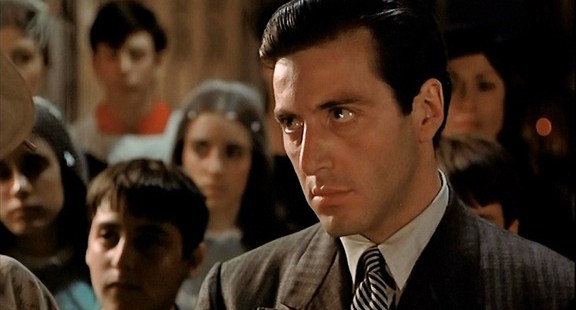 A classic endures because it adapts to the times or it has an immortal message. The Godfather does both: its views on family, the connection between capitalism, violence and the birth of America and the mythologising of immigration are always welcome themes. Francis Ford Coppola, together with Gordon Willis’ shadowy chiaraoscuro aesthetic, made a visceral, essential film. The Godfather begins and ends with closed rooms. The irony is that this is the most accessible gangster film ever made.

The Godfather Trilogy is showing in select cinemas now with a 15 certificate. Watch the 5oth anniversary trailer below: