In one of the latest commentaries on our technology infested world, this might be the most interesting one yet. Which makes it all the more of a shame that it only just misses its mark.

At the turn of the 20th century, the world was forming anew. Technological advances were accelerating with unprecedented methods, transforming society from a steam-powered collective of traditional ideals to a metropolis of bright lights and new ways to live and see life. Advanced consumeristic ideals, the introduction of train travel, and the brand-new influence and attraction of cinema consumed civilisation and its interpersonal relations, but despite the extraordinary advances of ways to live, the acceptance of the people forced to define themselves through new technology failed to pick up similar acceleration. The people were scared, untrusting and uncertain of the new myriad of dangerous machinery seemingly plucked from thin air, but had no other choice than to use it. It consumed their society and then it consumed them.

We’re in a similar state of flux now at the end of 2016. Since the turn of the 21st century, uncertainty and distrust have been gradually building up, with a peak in recent years. Whilst early films of the modernist epoch reflect a distinct uncertainty through portrayals of the dangers of trains and science and a clear rejection of the previous Victorian ideals of tradition and modesty, films of recent years have often portrayed the Apple-infested, smartphone beset, capitalistic society of today as powerful, angry, and utterly uncontrollable. AI films, like Ex Machina, Chappie, or even 2004’s I, Robot represent technology as wearing a mask shaped like a very human vulnerability which covers a sea of hidden intentions and animalistic plans, whilst blockbusters like Inception or The Avengers reveal futuristic technology to be antagonistic and manipulative. Whilst we face different changes and uncertainty than those at the start of the 20th century, we are no doubt facing them and dealing with them in very similar ways. 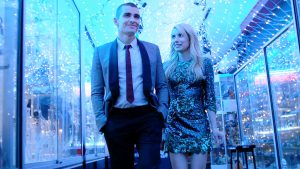 Enter stage left: 2016 summer hit Nerve. Co-directed by Ariel Schulman and Henry Joost, it follows introverted millennial Vee Delmonico (Emma Roberts) as she joins the online game Nerve, which is something a little ‘like truth or dare, but without the truth,’ after she is provoked by best friend Sydney (Emily Meade) who pushes her to be more outgoing. As she begins her technological odyssey, where participants choose to either be a ‘player’ or a ‘watcher’ (watchers choose the dares for the players as an anonymous collective, who then win money, whilst the more watchers they get, the higher up the leader board they go), she swiftly partners up with fellow ‘player’ Ian (Dave Franco). But once the adrenaline fuelled fun (escapades include kissing a random boy, running half-naked out of a high-end department store, and riding a motorcycle at 60mph blindfolded) starts to wash away, reality kicks in and the fun turns into less of a game than a precarious rat-race with dangerously little orientation. When survival becomes the objective, have these kids got what it takes to show some nerve?

The answer takes some guts to spell out on screen – or so that’s what it would have you believe. With one of the juiciest premises of this year’s cinematic pickings, Nerve managed to capture the interest of an impressive portion of cinema-goers, raking in $81.5 million at the box office, but failed to offer a satisfactory expansion of the films central foundation. From the outset, Schulman and Joost find themselves caught in a web of childish pandering and pleas to relate. Granted, the opening scene is absolutely affective, showing Vee’s morning through her computer screen as we watch with uncomfortable but somewhat undetectable voyeurism from behind it. We mimic the watchers of the game and we don’t ever stop. It’s a subtle touch, and no doubt an important one, but perhaps such subtlety was just a little underplayed in a film that marks voyeurism as one of its central conflicts. The final second or so of the film nods its head toward the thematic warning, but too many loose ends and jarring plot points overwhelm its direction and muffle its impact. 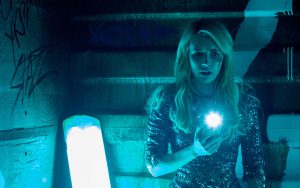 Congratulations are, however, in order for cinematographer Michael Simmonds who excels in utilising light and colour to match the film’s pace and tone. They would even be in order for him even if they failed to match, as the stylistic direction of the film’s aesthetic and phenomenal mise en scene appears as both cinematographic genius and untraceable beauty, reminiscent of director Tom Ford’s vision.

There are numerous moments of impressive cinematic handle, and ones that elevate Nerve into a difficult realm of astute social commentary whilst still being strikingly engaging and relatable, an impressive feat for any filmmaker. Still, the tension is amiss and awkwardly fitted, as if Schulman and Joost were handed a thrilling drama and instead chose to make a dramatic thriller. Such a confusion in pace and direction is off-putting, and unfortunately situates its audience a little further back from the close position of ‘watcher’ it aims for. But it’s an interesting film, and one that picks up remarkably in its third act, and is one of the most stimulating films to cover the state of technological flux we are in of recent years. Extra points for directing the majority of that social commentary to somewhat unwitting teenagers forced to define themselves through a similar world.

Nerve, directed by Henry Joost and Ariel Schulman, is released on Blu-ray and DVD in the UK through Lionsgate, certificate 15.