With the exception of Luc Moullet, Jacques Rivette remains the most under-seen and under-discussed of the Cahiers Du Cinema gang. This is in no small part due to the often daunting duration of his films (several run around 4 hours, and few run less than 2 and a half) as well as the fact that, along with Godard’s, they’re the most difficult to categorise into existing genres – and Godard at least tends to package his radical narrative and formal innovations within the basic form of fashionable filmmaking trends (at least during his most popular 60s run), drawing his plots and iconography largely from B-movies and pop culture, while Rivette has always been drawn to the antiquated forms of the 19th century European novel and the silent-era magic realist serial. This invaluable new collection from Arrow Films brings together five of Rivette’s most hard-to-find, several of which also happen to be among his best.

Out 1 is Rivette’s magnum opus, which isn’t to say it’s his masterpiece (I’d give that honour to 2007’s Don’t Touch the Axe, which revisits and refines many of Out 1’s central ideas). Though it’s never brought up explicitly, the events of May 1968 loom large over Out 1, which is set in the early 70s and tracks the downfall of the countercultural dream in bohemian Paris. Once unified towards the goal of concrete social and political betterment, the Parisians, though still retaining their idealistic impulses, now seek out their own individual ways of satisfying them; the idea that they’re working towards something meaningful has become antiquated. The collective dream has divided into a multitude of separate dreams, the counterculture has been absorbed and neutralised by the forces of big finance and mass entertainment, and, as a result, Paris has become fragmented.

Like a Pynchon novel, the plot is at once simultaneously hyper-complex and sort of irrelevant, put in place mostly as a framework to hang lengthy, self-contained set-pieces onto. Two theatre troupes rehearse for re-imaginings of classic tragedies by Aeschylus: one focuses intently on the original texts to the letter, rigidly orchestrating every minor gesture and vocal tic as to intentionally remove any sense of spontaneity and naturalism, thus creating a formal tightness that is, in its own way, deeply expressive; the other takes a far looser approach, each member focusing on realising their own personal approach rooted in their deep interests and values. The latter group sets the play aside for long stretches, devoting much of their time to group trust exercises and abstract physical activities, their aim being to get to the true essence of the text by forgetting restricting issues of loyalty. The communities here are cult-like in their all-consuming commitment to their causes.

Meanwhile, we’re introduced to two scam artists – Colin, who travels to restaurants with a harmonica, pretending to be a deaf mute in order to guilt-trip people into giving him small change, and Frédérique, a small-time crook who scouts for men to con in local cafes. When Colin mysteriously receives a series of cryptic letters, he makes a connection between them and The Thirteen, a secret society present in several Balzac novels (one of which would later be adapted by Rivette into Don’t Touch The Axe). As a result, he increasingly becomes convinced that the group truly exist and are running French society, an obsessive quest that eventually brings him into contact with all the other major characters. Pretty soon, every coincidence and chance encounter seems to him to be a clue pointing to their existence.

Shot on grainy 16mm in a pastel colour palette, Rivette alternates between lengthy, static masters and intuitive handheld sequences (many scenes are heavy on improvised dialogue and, at times, random passers-by are incorporated into the action). With its on-location shooting and incorporation of quasi-documentary techniques, Out 1 is filled with an insane density of ethnographic detail; this is perhaps the most immersive portrait of the period ever committed to celluloid.

Yet Out 1 in no way belongs to the naturalist tradition – in fact, much of the narrative dynamic is structured around conflicting approaches to performance, editing and framing, which initially feels jarring, but soon mutates into a rhythm that’s surprisingly unified and smooth. This is fitting, as Rivette doesn’t see the world as being made up of a divide between fiction of reality, but a vast network of interlocking fictions. In their private lives, the actors too assume fictitious identities in order to fit into particular situations, and struggle to communicate the complexity of their true emotions just as much as they struggle to communicate the meanings of their lines. The actors tend to tightly structure their lives so that half revolves around the theatre and the other revolves around the investigation of some likely fabricated conspiracy, thus living their entire life in the shadow of various fictions. The desire to solve these conspiracy begins as a means to an end, but eventually transforms into an end-in-itself, providing structure and meaning to lives that would otherwise be stiflingly dull.

Both the original play and the alleged conspiracy gives the individual enough material to guide their artistic instincts while still leaving them a large amount of room for personal interpretation; the particular emphasis and inflections they put on a particular line of dialogue can change its meaning entirely, just as the way they perceive an apparent clue can construe it as either wholly mundane or of vital importance. Perceptions can’t be trusted, and everything a character brings to a piece drawn on their own headspace, everything needs to be deciphered. Paradoxically, the characters are united by their collective commitment to their own insular fantasies.

(Also included in the set is the re-edited shorter cut Out 1: Spectre)

Rivette’s only English language feature, Merry-Go-Round is something of an encapsulation of Rivette’s primary narrative and thematic concerns: long, seemingly irrelevant interstitial scenes of rehearsing; a projection of internal conundrums outwards, until the entire world begins to appear as a grand mystery; long takes that relentlessly tracks characters until it makes them register as claustrophobic victims of fate; lengthy hang-out scenes that record the simple joys of everyday life so that his rigorously plotted, lengthy films feel like a sprawling breeze (it should come as no surprise that Rivette was a huge fan of Hawks); deliberate and carefully regulated tonal fluctuations; the introduction of a mystery that’s treated incredibly nonchalantly, hinting at the workings of a larger conspiracy but ultimately keeping its exact mechanisms vague, focusing our attention on its effects of those who wander into its path.

If Merry-Go-Round is one of Rivette’s weakest features, it’s not because it’s not an accomplished work in its own right, but because it seems like a catalogue of concerns Rivette would go on to revisit with far more potency throughout his 80s period, such as in the masterworks Le Pont le Nord and Gang of Four. It’s the least eager of all Rivette’s features to experiment with form, and the only to feature the only flat-out bland central performance. Still, the film should be written off as a mere curiosity. As with many minor films by great filmmakers, it sums up Rivette’s major recurring theme with an endearing simplicity – the intersection of deliberate public performance and unconscious private performance. A good, accessible introduction to the director’s work, but it doesn’t hold much new for those who are already familiar with it. 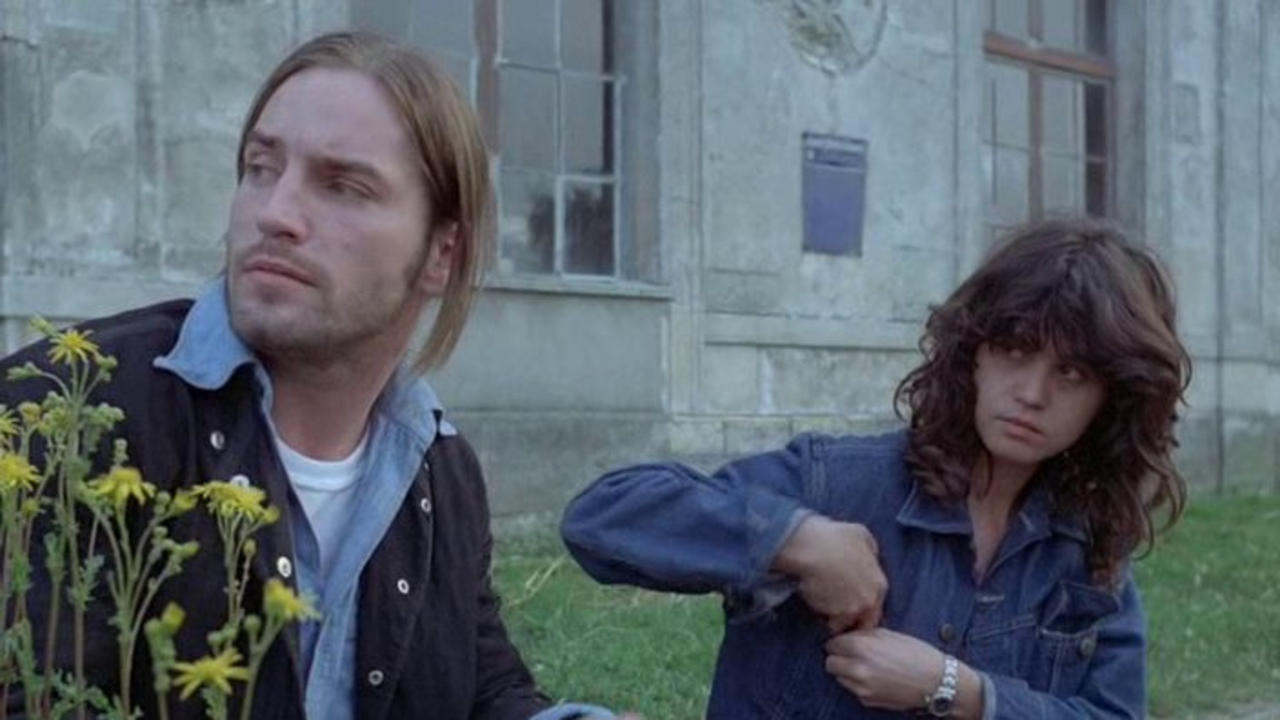 Like most new wave directors, Rivette tends to be known primarily for his early features despite having a catalogue of work behind him that varies wildly in theme and scope – it doesn’t help that his 4th feature, Celine and Julie Go Boating, is a fixture of first-year film school courses. This is to say that if you know Rivette for his paranoid, sprawling conspiracy tales, the double-punch of Duelle and Noroît should be a revelation.

With this double feature (which premiered one after another and drastically altered the direction of his career), Rivette became less interested in sociology and more in psychodrama and metaphysics – not coincidentally, these are the first of his films that can’t also be read as being ethnographic documents of their time and place, existing, as they are, in a temporally vague hyper-reality. Whereas, in his earlier films, Rivette introduces a high-concept plot only to increasingly side-line it as the narrative progresses, here Rivette drives his films steadily towards total narrative and aesthetic abstraction, with identity shifts, outright fantastical elements and in-camera expressionism. Rivette also develops a dialectical engagement with cinema itself, half-ironically conflating the mythological framework of the Gods with the iconographic framework of the cinema industry. At once campy and nightmarish, but with an undercurrent of profound melancholy, Noroît is a major masterwork that’s equal parts Jacobean tragedy and old-fashioned pirate’s adventure tale.

Part revisionist noir, part mythological fantasy, part absurdist free-for-all, Duelle takes a comic-book gimmick – the Goddess of the sun and the Goddess of the moon both return to modern day Paris to hunt for a jewel that will make them mortal, manipulating any mortal they come across and constantly playing with one another to get to it first – and takes it in radically unexpected directions. Rivette employs an unusual structure which introduces both characters as archetypal femme fatales before clarifying their true identities around the half-way point. Their intense desire to transform from abstract beings into flesh-and-blood humans reflecting the desire of fetishized female types, as well as movie stars themselves, to become everyday through soliciting audience empathy, in effect expanding its scope to question the way cinema tends to codify and commodify its central players to transform them into the closest things the 20th century has to its own deities.

Rivette’s most explicitly referential work, Duelle’s environment seems to be cobbled together from elements of iconic noirs (a little Lady From Shanghai here, a little Kiss Me, Deadly there) compressed into a hyper-real, hallucinogenic dream state; I thought the oft-made comparisons between Rivette and Lynch were silly until I saw Duelle, with its bifurcated, identity-shifting structure and vaguely nostalgic cityscape made up of gaudy hotels and casinos. For once, we see one of Rivette’s trademark conspiracies from the perspective of those who do the conspiring, which casts a new light on the tragedy of the innocents sucked into its path. The omnipresent Gods constantly conjure illusions and playful manipulations to coerce others into submitting to their will. Rivette creates a dialectic between contemporary gender signifiers primarily perpetuated by the cinema and myths that have existed for centuries; it plunges us into the modern-day incarnations of these types before reaching back to their roots.

The Jacques Rivette Collection is available in the UK now on blu-ray through Arrow Academy.