Read more
You are at:Home»Film»Cinema»Review: The Black Phone
By Reece Beckett on June 24, 2022 Cinema, Film
80%
80
Terrifying

The Black Phone is a must for horror fans, with a phenomenal performance from Ethan Hawke.

It has been a full decade since Ethan Hawke and Scott Derrickson first collaborated on-screen for what is still considered one of the most frightening horror films of the 21st century with Sinister, alongside other modern classics like The Conjuring. Since then, Hawke has found himself in a range of projects in a range of positions – directing some independent films, starring in Moon Knight etc – and Derrickson also found his way into the Marvel Cinematic Universe when he directed Doctor Strange.

So now, returning to work together after that decade, it was a great pleasure to see that the bond which made Sinister so tense and memorable has not only remained as it was but may have even intensified as, in The Black Phone, Ethan Hawke steps back from the spotlight into the role of the villain (a serial kidnapper called ‘The Grabber’).

The Black Phone is very much a film of its time, which sounds like a cynical way to instantly date the film but it is meant as a compliment. Recent mainstream horror interests in the written work of Stephen King and his adapations (spurred by the success of 2017’s IT) have mostly carried over in a playful manner – Georgie’s iconic yellow coat from IT is worn by a character riding a bike in the rain here – but King’s influence is also quite clear in the focus on child characters, the themes of domestic trouble/abuse and the use of horror as a metaphor/plot device to encourage the growth of the protagonist. 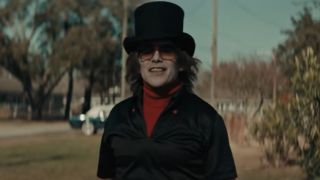 The Black Phone could easily have been a ‘simple’ 90 minute thrill ride toying with its Hitchcockian set-piece set-ups, but instead it boldly tries to push beyond its thrills and to challenge the audience both narratively and thematically. The plot is delivered in an interesting and refreshing manner, toying with flashbacks and dream sequences (some of which come true, some of which don’t) to keep the audience engaged whilst the aforementioned focuses on childhood trauma, belief in spirituality and domestic abuse allow the horrors of Ethan Hawke’s Grabber to become all the more real.

It’s a very strong film – hopefully a horror blockbuster, as it is certainly a film of quality – made with genuine vision and a love for horror storytelling after a rough period for the genre which saw the mainstream horror tend to feel like cash-ins and the independent successes often try to disguise their horror under film form and narratives that were largely more aligned with dramas. Hawke is genuinely petrifying in a role that he so clearly enjoyed playing, the cinematography is stylish and packs a punch when it needs to and the script delivers everything you could really want.

For fans of horror, this is your Summer must-see. For anybody else, avoid this at all costs because it is genuinely quite rattling and graphic… unless you’re feeling particularly adventurous.

The Black Phone, produced by Blumhouse Productions, started showing in UK cinemas on the 22nd of June. Watch the trailer below: