Stars at Noon succeeds in being a faithful adaption of Denis Johnson's politically rife source material, if not unconvincing in its last-minute pairing of Margaret Qualley and Joe Alywn.

Viewed on Thursday 26 May as press for the Cannes Film Festival 2022.

Inspired by Denis Johnson’s 1986 novel of the same name, Claire Denis‘ quasi-political-romance, Stars at Noon (2022), is a somewhat faithful adaptation set during the Covid-19 pandemic, honing in on what it means to be a ‘citizen’ and a political refugee in Central America.

“My screenplay,” Denis explained at Cannes Festival 2022’s jury conference, “went from one extreme to another.” Due to the strict health rules surrounding Covid-19, “the film took place in present times” during the politically-volatile elections in Panama, rather than the ‘novelised’ 1984 Nicaraguan Revolution against Sandinista rule. But with characters flippantly wearing masks, and an unnecessary PCR test sequence, I felt detached from Stars at Noon, forever reminded of the misery of the pandemic, rather than lost in the spectacle of cinema. The film’s beating heart remains consistent, though, with the financial suffocation that plagues the source material.

Money is tight, with the Córdoba’s value considerably worthless compared to the US dollar, and the consequences are palpable in every slither of dialogue. “F*ck,” Nick Ramano proclaims, “owns the world,” and it does own the world for Margaret Qualley’s unnamed protagonist. In fact, she owns it as an uprooted, American ‘journalist’ who sells her body to survive for 50 USD per client. Moreover, Joe Alwyn‘s riches-to-rags Daniel is plagued with financing modern-day luxuries from WiFi to even phone calls. Both star-crossed lovers are longing for political emancipation from Panama. But every interaction, and decision, comes back to capitalism and the lost livelihoods and romances that are destroyed because of it. The financial anxiety alone made Stars at Noon worthwhile, if not infuriating with Denis’ on-the-nose social commentary. 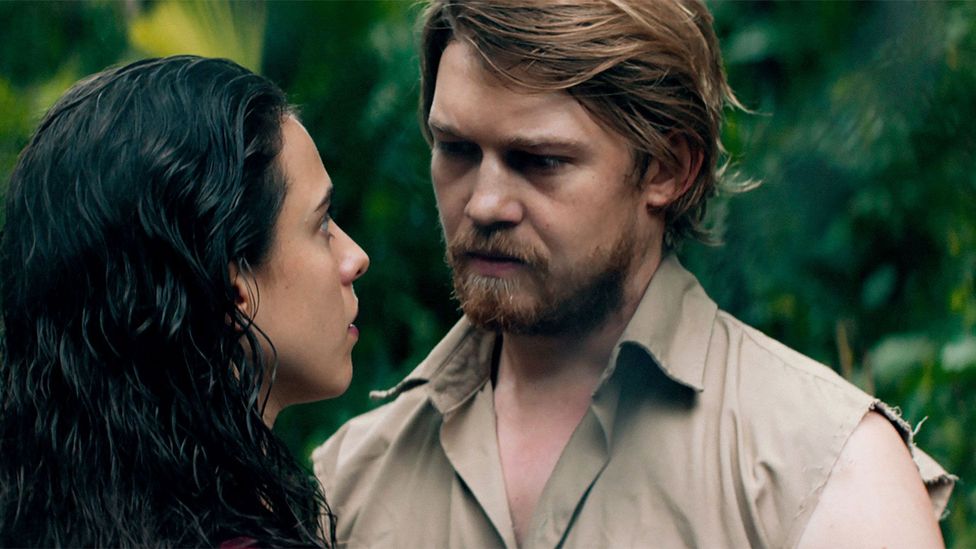 Qualley’s performance as a struggling journalist is the_show_stopper; an electric and charming injection of fresh air into an otherwise demoralising narrative. Yet, her onscreen relationship with Alwyn did feel synthesised. Forced, even, and for good reason(s). With Robert Pattinson dropping out from the project, Alwyn as Qualley’s counterpart was far from convincing. Éric Gautier’s cinematography is exceptionally dazzling, particularly his colour palette. But his use of unsteady close-ups, capturing Qualley’s flip-of-the-coin moments of laughter to heartbreak; the glassy look after a sip of rum; clawing hands during intercourse . . . it all feels like Denis’ desperate direction to capture a relationship worth rooting for in a high-stakes political web. Unfortunately, her leads don’t really achieve this.

Gautier’s thoughtful use of borders, however, in his mise-en-scène was effective. Qualley walks in the puddles, Alwyn on the grass. Then then both switch, fluid between the invisible socioeconomic border that previously divided them. Tindersticks and Stuart Staples beautifully complement the onscreen spectacle, blanketing the film in jazz that ranges from tameness to chaos during the appropriate beats. I must say, the most endearing moment in the film occurs in a deserted bar, where Staples’ velvet voice just echoes over our protagonists swaying. It was purely human.

But Denis needed more human moments to make me wholly invested, rather than relying on oversaturated, cliché dialogue that would be more at home in a Bond film. Overall, Qualley’s stellar performance and Denis’ winding, political narrative-web were engaging enough to keep my interest above water level. A longer running-time . . . and I fear I may have fallen asleep.