There’s something grotesque rumbling underneath Guillermo del Toro’s latest Nightmare Alley. An intersecting and unabashedly pulp play between psychological neo-noir and hoodwink thriller, the film is one long con. It prays on the mind like its cheap-skate huckster of a protagonist, stringing you along into its spiral of depravity and emptying madness with bewitching glamour and showmanship.

Relatively close as an adaptation of the 1946 William Gresham novel of the same title, and bearing slight resemblance to the 1947 noir, Del Toro’s Nightmare Alley is singular, not just because its material clicks right to his sensibilities. Uncompromising in its desolation, it takes time to dig laboriously into the details of its acts, entrenching you in the grit and grime that belie its world and characters. Everyone is caught up in their own delusions, hanging precariously onto thin threads of lies and half-truths that help rationalise themselves and wash away sin. What results, then, is perhaps del Toro’s most patient and fragile film. 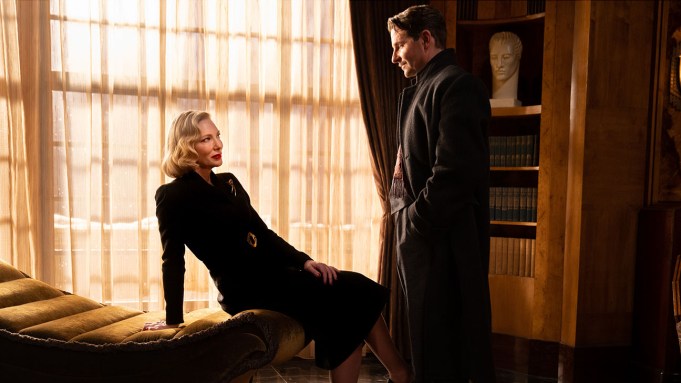 Nightmare Alley is split into two distinct halves. The first has Stan (Bradley Cooper) land at the site of a travelling freak-show carnival, masterminded by the hospitable showman, Clement Hoatley (Willem Dafoe). These carnival set-pieces feel the most ‘at home’ for del Toro with his affinity for monstrosity and gothic-inspired romance, and it can occasionally suffer as a tad elongated. But keeping it fresh is the engaging set-up and hypnotic production design, throwing us right into the colourful carnival wunderkammen which delights in devilish fun-houses, foreboding ferris wheels and rain-soaked alleyways. Altogether, it aids the palpable sense of the sweltering, squishy muddiness of the American mid-west, fitting perfectly to the depression-era setting. It’s hodgepodge of ideas like the clairvoyance that enraptures Stan create an eerie, other-wordly atmosphere unlike any other of del Toro’s work. Buttressing the fantastic design, though, is the assembled cast (like Ron Perlman’s fatherly “strong-man” Bruno) who form a strong familial collective, serving Stan’s growth from small-time shyster to mythomanic con artist.

The sweeping, languid scope of Nightmare Alley is difficult to execute, but del Toro pulls it off wonderfully, particularly in the second half as Stan and Molly (now “The Great Stanton”) are thrown into the glittering gaze of the icy psychologist Lilith Ritter (Cate Blanchett). The predestined psychological warfare, as it always occurs in noir, that rages between her and Stan is immediate on their first meet. “You got a smoother line, but you run a racket – same as me,” he observes. For him, Lilith’s the key to uncovering the elite’s secrets. His act can only go so far.

What ensues is a gripping, densely plotted con-job on the reclusive tycoon Ezra Grindle (Richard Jenkins). In terms of aesthetics alone, Nightmare Alley is consummate noir material, with its towering Art Deco creating a timeless, inescapable void. DP Dan Laustsen’s stark use of single-source lighting in any given scene is glorious, along with the stunning palette of oranges, greens and whites like the beautiful wintry locale, making every shot sumptuous to behold. The tension rackets up considerably as Stan becoming ever more convinced in his powers. Is he really in touch with the dead? That Nightmare Alley still keeps you guessing, even up to its final moments, shows how powerfully and carefully del Toro has crafted the narrative. So much so, it renders its hard-hitting conclusion difficult not to invoke some emotion.

Perhaps the films true main powerhouses, however, lie in both Bradley Cooper and Cate Blanchett’s performances, providing the film’s most electrifying and hair-raising moments. Their dynamic practically scintillates off the screen, showcased among other examples in one masterful scene that has the pair silently, intimately exchange a glass of whiskey between them. Blanchett is perfect casting as a femme-fatale, equal parts beguiling and terrifying. Cooper here, however, is in a league of his own. Following his brilliance in Licorice Pizza, his portrayal of Stan brings unexpected pathos and weight to such an easily contemptible character’s decline, even when it does indeed make us resent him. Cooper’s screen presence has always been a strong one, but Nightmare Alley amplifies it with the right material.

The final result of all this is a brutal and utterly emptying gut-punch. For Stan, mentalism and the lies involved is his way of counteracting genuine self-reflection, blinding him to all reason and ultimately placing him on a path that can easily be avoided. He is trapped, forever, in his own self-made nightmare of deceit and exploitation. It may not reinvent the wheel of noir narratives, but Nightmare Alley succeeds as a patient examination of the disintegration of human life into sobering nothingness. We can ask questions about whether one is man or beast all day long, where to place the blame. But as Nightmare Alley shows though, there is only yourself. That final shot shows it all, really.

Nightmare Alley is in cinemas now with a 15 certificate. Watch the trailer below: