Read more
You are at:Home»Film»Cinema»Review: The Founder
By Sophie Trenear on February 23, 2017 Cinema, Film
40%
40
Humdrum

In the widely unheard of story of the rise of McDonald's, Michael Keaton excels as Ray Kroc, the man behind its growth but not behind its name.

It has to be said, Michael Keaton’s doing pretty darn well for himself recently. From fading into bland obscurity in the late 90s and early 2000s after the vast success of Batman and Batman Returns, he joined the likes of Matthew McConaughey and Robert Downey Jr. in 2015 by undertaking Hollywood’s favourite narrative of all; the comeback. There are only a handful of actors who can manage to adapt to the times to stay relevant, but starring in back to back Best Picture Academy Award winners (Birdman and Spotlight), it’s safe to say Keaton managed to claw his way right back into limelight, and rightfully so. 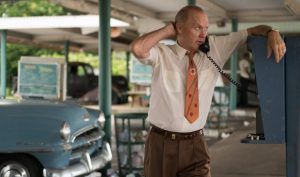 And whilst his third award season vehicle hasn’t quite reached the heights of its predecessors, The Founder has garnered a respectable amount of award buzz to be considered a subsequent success for Keaton, who clearly knows how to play the game right. Following travelling salesman Ray Kroc as he comes across a quaint local restaurant run by the McDonald’s brothers (Nick Offerman and John Carroll Lynch) with astonishingly innovative potential, The Founder paints a map of the humble beginnings and subsequent uprising of the fast-food palace we know as McDonald’s today.

Granted, the comparison between John Lee Hancock’s sixth feature and 2010 effort The Social Network isn’t a clever one – but damn it, it’s true. McDonald’s is to the fast-food world what Facebook is to that of social-media, and both stories hinge their significance on the easy tale of bonds, blame and betrayal. Fundamentally, the American Capitalist Dream’s omnipresence serves as their catalyst for drama, though it quickly becomes all too noticeable that Fincher’s effort sews such a motivation deeper into the plot of The Social Network, hiding it in plain sight, whilst The Founder’s surface-level twists and turns simply don’t chime together. 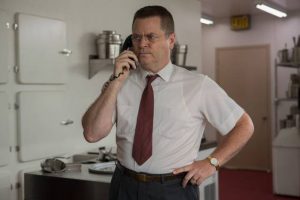 Certain moments rear their heads as intriguing and as innovative as the creation of the golden arches itself, but they are so few and far between it’s hard to even try to see them as a saving grace. We open on a close-up of Kroc, passionately, eloquently even, pitching a Prince Castle Milkshake Maker to an unknown buyer: “Now, I know what you’re thinking: ‘What the heck do I need a five- spindle for? I barely sell enough shakes to justify my single spindle’. Right? Wrong”. It’s a motif that runs throughout the film, and an effective one at that. “I know what you’re thinking,” Kroc repeats, an assumption of his which both propels him up and sends the reputation of his very personality spiraling down. Of course he doesn’t know what others are thinking, quite the opposite most of the time. But it is his persistence (and a rather gruesome persistence for persisting) that he does that is responsible for his uprising. Not quite the Zuckerberg of stealing burger buns, but near enough to inspire a little reeling.

Still, there’s no getting away from the fact that the film brandishes an inherent dreariness. Whilst characters are straightforward, they remain far from striking; whilst the plot is interesting, it strays far from enthralling; and although it offers various impressive performances, the true-to-life vein it takes doesn’t allow for any to reach anything more than mere plot device status. And, honestly, does there have to be so many phone calls in 115 minutes? According to Hancock, yes there does. The exception is, however, Keaton himself, who shines in his portrayal of the slowly corrupting Kroc. It’s no Birdman, but it’s brilliant either way. As for the film itself, nowhere even near Birdman’s league, it’s long, it’s stodgy, but it’s fine and average, with very little actually wrong with it. A solid effort. Just far from a memorable one.

The Founder (2017), directed by John Lee Hancock, is distributed by The Weinstein Company. Certificate 12A.