Read more
You are at:Home»Film»Cinema»One to Watch: God Particle
By Sophie Trenear on February 16, 2017 Cinema, Film

After 2008’s found-footage style Cloverfield unleashed a city-consuming monster onto the streets of Manhattan, and its spiritual successor 10 Cloverfield Lane hit critical acclaim eight years later, the ballooning universe of Cloverfield hasn’t had to do much in the way of promotion to keep its cult-following afloat. Instead, relying on its expansive and scarily convincing, A.R.G (Alternate Reality Game) made up of entire websites, links, password protected videos and a whole universe of clues relating to the world of Cloverfield’s existence hidden in the depths of the internet by producer J.J. Abrams and his team of internet lurkers, as well as the suspenseful mastery of keeping their films under wraps (10 Cloverfield Lane was only announced less than three months prior to its release), the Cloverfield franchise is now celebrated as one of cinema’s finest. And now, a year and a half later, we have a third to add to it, fortunate for those gingerly using the word ‘franchise’ to describe the mere two films, tenuously connected by its namesake more than anything. 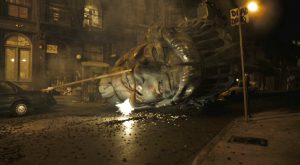 Interestingly, the tertiary chapter in the Cloverfield universe has dropped its alias as if to turn its back on anything that may help forge a connection to its predecessors. And from the sparse details we have to offer on the film, God Particle couldn’t have aligned itself further from the earthly thrillers before it. Taking place on a faraway space station, a team of astronauts, headed by David Oyelowo, Chris O’ Dowd and Daniel Brühl, find themselves in a deadly predicament after the Earth disappears in an instant. With the subsequent arrival of a mysterious space shuttle, the team must fight for survival after their horrible discovery makes itself known. 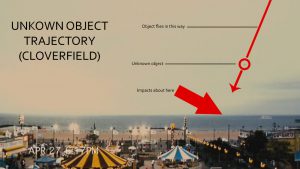 A (widely believed to be) satellite falling into the ocean in the film’s final seconds. Image credit: Paramount Pictures

The major theory has its roots in the franchise’s A.R.G., which centralises a (fictional) company called Tagruato. John Goodman’s character in 10 Cloverfield Lane, Howard, used to work for the cooperation, in a job which has something to do with satellites, which is how he found out about the incoming alien attack. Without going into depth into the A.R.G. theory, the final few seconds of Cloverfield sees a satellite fall from the sky into the sea, and it is very possible that God Particle will see something about these satellites come into play, and hopefully offer an explanation.

Announced back in 2012, God Particle was first officially tied to the franchise when a piece of viral marketing for 10 Cloverfield Lane included a sound clip taken supposedly from the International Space Station, later confirmed as ‘Cloverfield 3’ by The Wrap. However, one of its central stars Gugu Mbatha-Raw has remarked that “that is news to me. When I did the project, it was a total, standalone sci-fi, space thriller. So I couldn’t tell you how it’s connected.”

In Cloverfield’s ever-suspenseful nature, is it possible that Mbatha-Raw is keeping as much mystery in the air as possible? Or that the film’s ancestral networks are so hidden that she is in as much of the dark as we are? Either way, the brand’s reputation for cryptic hype isn’t letting us down.

God Particle, directed by Julius Onah, is due to be released by Paramount Pictures on the 27th October 2017, certificate TBC.