A wonderful real-life drama offering a warm yet momentous portrayal of the Loving couple, who set in motion the invalidation of the law prohibiting interracial marriage in 1967.

With a title like ‘Loving’, you’d be free to wonder if Hollywood’s just gone the whole hog and summed an entire Oscar season theme into one, inevitably generalised, generic ninety minutes. After all, with its accolade counterparts comprising of one film charting the grief of a recently widowed first lady, another tracing a man recently saddled with an orphaned nephew, and another a blatant love-letter to Hollywood’s finest love-stories in the form of a few catchy dance numbers, it seems acceptance and – you guessed it – the learning of love are two of this year’s central veins, all wrapped into a few cushy, but nonetheless enjoyable, conclusions. Jeff Nichols’ Loving is no exception, but, fortunately, proves far from the generalised biopic its title invites. 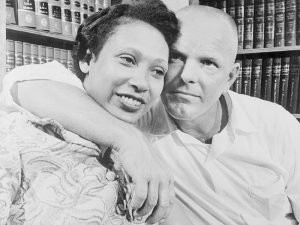 ‘Loving’ in fact refers to the shared surname of the two central characters, Richard (Joel Edgerton) and Mildred (Ruth Negga), the real-life couple of the Loving vs. Virginia Supreme Court case of 1967 which invalidated state laws prohibiting interracial marriage. Edgerton plays his reserved, quietly anxious role finely, and proves worthy of his Golden Globe nomination, but it is Negga who balloons from the film. Commanding every scene she has with a shy tirade of warmth and compassion, she revels in the chemistry she creates with each character. She might not win the Academy Award for Best Actress (Natalie Portman in Jackie has all but stolen that one), but Negga certainly deserves her nomination.

After marrying in Washington D.C., the pair return to the disparaging eyes of Caroline County, Virginia and are soon arrested, harassed and finally made an offer: separate and annul the marriage, or leave the state for twenty-five years. Hastily, though not altogether unemotionally, opting for the latter, they set up camp in Washington, away from family, friends, and a myriad of loved ones, both the empathetic and the resentful. Those scenes set in Washington (for which we don’t make an overly long stay), whilst less affecting, do set up a powerful sequence of the couple’s elaborate trek back to Virginia to allow Richard’s midwife mother to deliver their first-born. Trading a blanketed Mildred between Richard’s car, parked just outside the state, and her brother’s to take her into it, we see just how much they risk for each other’s wellbeing and a chance at normality, only to be taken back to court after the birth. So swiftly after, in fact, that as Richard confronts the stale looking police officers waiting outside, Mildred drags herself out of her bed minutes after giving birth to stand by her husband. 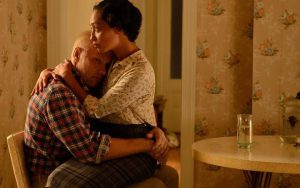 It is that testament to love that the film finds its solid foundations in. But, whilst inarguably generic, it strays from a tempting banality by humanising that testament. Richard and Mildred’s relationship isn’t the unachievable, oddly objectified love of The Notebook’s Noah and Allie, nor is it the conflict-ridden will-they-won’t-they of When Harry Met Sally. Whilst caused by the very existence of their affair, Loving’s conflict is dug altogether from external factors, and never succumbs to dragging their relationship through the dirt only to cut them up and splice them back together. It is the fleeting glances they share, the certain lilt of the laughter they share with only each other, the rejection of alienating themselves from those who might be concerned, but instead offering an embrace; it’s a subtlety reminiscent of the tone of last year’s Brooklyn, in more ways than one, and has much of a similar effect.

A wonderful, often exciting, and always engaging true to life drama, Loving is an apt example for the romance dramas of years to come, and even more so for the actresses taking the reins.  Lacking in enough dramatic outrage, though perhaps rightly so, it proves to be just the latest in the delightfully expanding list of untold racially significant stories, and by far one of the most human of them all.

Loving (2017), directed by Jeff Nichols, is distributed in the UK by Focus Features. Certificate 12a.