Guilt, grief, and grit reign in J.A. Bayona's latest, as he teams up with acclaimed author Patrick Ness in a stunning adaptation of the award-winning book.

The mind of a child offers ripe pickings for the investigative eye of a perusing filmmaker. J. A. Bayona, of The Orphanage fame, having paired up with acclaimed author Patrick Ness, of Chaos Walking fame, tells a stirring tale of love and loss, anger and hope, and potentially most importantly, the agonizing buzz of misunderstood and misjudged emotions that force their way to the surface of childhood trauma. But, as the eponymous ‘Monster’ of A Monster Calls laments, this is the story of a boy not yet a man, nor still a child. And the film it spins from its foundations is a film of a mind not quite like boys in other films, nor is it anything different. It simply delves deeper and becomes a far stranger rarity in the process, one of much riper value.

2017’s award season offers its thematic vein as love and loss (Manchester by the Sea, Jackie, Hacksaw Ridge, even last year’s Nocturnal Animals which could very well gander a surprise Academy Award nomination for Best Cinematography), to counter the long string of dramatic Hollywood based commentaries of recent years (Birdman, Argo, The Artist) and the overwhelming procession of intense biopics which litter the floors of Hollywood’s studios and research suites. There is a little overlap, but the vivid sense of loss and grief which defines the start of this year’s cinematic output might be the most abstract yet absolutely engaging trend of recent accolade periods. 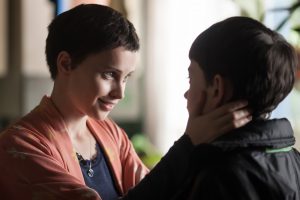 Following thirteen-year-old Conor O’Malley whose mother is slowly dying from a terminal illness, he faces the impending loss of an important and loved parent whilst having to deal with his cold-hearted Grandmother, a father away in the states with a new family, and a gaggle of bullies at school, all at once. But above all, he must deal with the guilt of his utter helplessness for all three. As luck would have it, the luscious Yew tree across from his house (think the lavishness of the tree from My Neighbour Totoro) transforms into a gigantic, Liam-Neeson shaped ‘Monster’ who isn’t actually about to kill Conor as it might look like, but is about to help him. This is done through the art of storytelling- four stories, in fact, two drawn in flowing watercolour, and all heftily entangled with Conor’s own life, but not as you may think. Its surface metaphors may be in abundance, but it oozes unique vision.

Without having seen the hotly anticipated Manchester by the Sea or Jackie, it’s incredibly easy to remark on A Monster Calls’ astoundingly delicate yet painfully accurate interpretation of human emotion and the filter a child can put up to deal with its many difficulties. Even with as much of a metaphor-ridden surface as it offers, its shield of analogy-upon-analogy hides a far deeper truth of a painful inability to cope, the guilt that follows, and the loss of innocence that runs through its veins. Even once having seen Manchester and Jackie,  it is unlikely that any of the three will have dealt with grief in remarkably overlapping ways, which means that each must bring something starkly different to the table if not to be brushed onto the floor to join the rest of Hollywood’s lost biopics. Patrick Ness’ passion project, having written the original book, revels in its childish mediation of grief as drawing out literal monstrous afflictions, as if answering the demand head on.

Yet what results is far from just a child’s film. In a similar vein to 2015 effort Inside Out, Ness and Bayona take childhood realization to create a compilation of cues for the retrospect and deeper feeling of the adult audience too. Both audiences are catered for, and all audiences leave happy, if not with slightly soggy eyes. Still, Inside Out inarguably comes out on top in terms of brevity and cohesion, perhaps by its deeper link to audiences under the PG-13 age rating of its successor. A Monster Calls, in comparison, basks in a darkness which separates its audience into two cohesions which simply don’t end up very coherent anyway. A reckless abandon, and perhaps a cheap swipe from me, but one that seems unlikely for the best filmmakers among us to be able to stray away from. 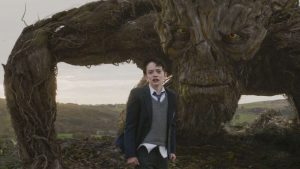 Scenes play jump rope between imagination and reality, often breaking out of careless fantasy to a hardened reality where the two have bled together. As Conor engages in a particularly powerful hallucination involving helping the Monster smash an achingly symbolic Church house, he looks as if he’s finally found something to help just as we cut to his house-proud Grandmother’s living room, war-torn at his own hands. It is the best scene in the entirety of its 108 minute run time, made so particularly by his Grandmother’s silent entrance into the room, a tracking shot following her gradually deepening concerned face. The pair regard each other as both come to terms with the scene before them, all in near silence, carried by the astute performances of both Weaver and MacDougall. It’s dark, unequivocally, and ripe with perspicacious emotion; have no doubt, these performances are truly stunning.

But it’s such darkness that balloons the film into its heinous wonder. Excellently paced, and avoiding cheap or over zealous predictability, its emotional punch constantly lands off-centre and isn’t afraid of hanging it precariously in the balance to offer deeper understandings of the characters. Conor’s deteriorating mother silently refuses to tell him there’s a good chance she’ll die soon, his father refuses to permanently take him stateside after his mother gets too sick, and his grandmother buries him under an avalanche of cold shoulder as he is forced to roam her pristine house, alone. These are callous actions, but their motivations are far from insensitive. Instead they all reflect how each wants the very best for Conor but are helpless to give it to him, just as he is to them. And that’s exactly how the Monster can help.

A Monster Calls, directed by J. A. Bayona, is distributed by Focus Features. Certificate 12A.