Read more
You are at:Home»Film»Cinema»Review: Sully
By Sophie Trenear on December 6, 2016 Cinema, Film
80%
80
I East-would recommend it

Eastwood's latest culminates in a tense, effective portrayal of a real-life hero once hailed, by both those quick to blame him and himself, as a fraud.

2016 for Hanks, as for many of us all, has not been his year. April’s A Hologram for the King, the latest in a long line of slightly uncomfortable American-fish-out-of-water films, couldn’t have been drowsier unless it was shot in the back with a tranquiliser gun. And last month’s Inferno scored a plentiful number 10 on the critics’ scale of bad to worse, revelling in a script that was apparently dragged from the depths of the devil’s living room itself. Not that any of this is to say Hanks himself has been anything less than brilliant, just his pickings of starring roles may need to check itself for blemishes before 2017 rolls in. But then, out of the depths of the ever-filling storage room of biopics in Hollywood, came Sully. Directed by Clint Eastwood, ‘the man, the machine’ of a director if there ever was one, Hanks stars as its eponymous character, the man who, against all odds, saved the lives of 155 plane passengers by landing on the Hudson river after a fatal bird strike. Hailed as a hero by some, a fraud who futilely endangered precious lives by others. The latter is forefronted chiefly by the National Transportation Safety Board, seemingly out to prove Sully is not a full-fledged pilot, but a reckless phony. 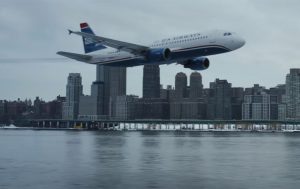 Somewhat expectantly, comparisons to Robert Zemeckis’s 2012 effort Flight are inevitable, but fruitless. Whilst the fallout of each plane crash are held under an investigatory magnifying glass hellbent on sending both Sully and Flight’s whit to either prison or a career-less hole of destitute proportions, Eastwood’s impressive structuring of Sully elevates his 35th directorial effort into something more than just a simplistic bout of sensational story-time. Straying far from the go-to method of linear time, Eastwood utilises polytemporal time and flashbacks, letting his film, characters and audience simmer in a melting pot of shallow trauma and gratitude riddled with unexplained anxiety. Anyone familiar with controversial 2014 effort American Sniper will know that this is a kind of explanation-in-tension that only Eastwood revels in with such smooth expertise, finding the painful in painless prowess.

The actual surrender of the plane’s engines to the freezing Hudson river doesn’t even make its full-fledged appearance until Sully’s (and co-pilot, played impressively by a moustached Aaron Eckhart) trauma and PTSD (post traumatic stress disorder) are covered in grimacing, but respectable, depth. A snippet of a scene where Sully gazes out to the Manhattan skyline a day or so after the incident only to see a plane soaring in between the buildings before colliding headfirst into a skyscraper, enveloping the whole sight into flames, cuts straight to the heart of the trauma and leaves it lingering. As close-ups of Sully are intercut between shots of the doomed plane, he is revealed as utterly helpless to save the very symbol of his newly acquired PTSD as it crashes and burns, helpless to help himself, the hallucination kept poised by Sully’s own disbelief of it. 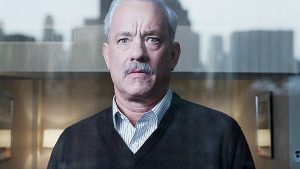 Together with his First Officer, Jeffrey Skiles, Sully must take on the NSTB (National Transportation Safety Board) in a battle of humanity and high-stakes. Whilst his investigators have a multitude of computer data and simulations to hand, Sully and Skiles have but their experience, their intuition, and their combined belief of one another to draw up their riddled rebuttle. And with the NSTB taking an immediate oppositional stance to Eastwood’s representation, it seems the question of the morally correct ratio between reality and fiction in Hollywood bio-pics has swung its tired head around the corner once again. Claiming the NSTB was unfairly represented, their representation proves to act more as the monstrous head of a simple antagonist. With the tone and substance of their investigation highly exaggerated and distorted, it’s difficult to accept that without that distortion, the final scene of the film – the hearing – would have had little of the impact it so expertly revelled in in the final product.  It’s a hard feat to enter that cinema screen without prior knowledge of the controversy Sully has provoked, but it’s easy to forget after being enveloped with such warmth and such high-octane humanity that its fallout managed to conceive.

And as we finally get the withheld gratification of the plane’s river-landing, Tom Komarnicki’s script, Tom Stern’s cinematography and Eastwood’s direction fit into piece like expertly crafted jigsaw pieces. It’s claustrophobic, it’s daring, and it’s brimming with fist-clenching tension. ‘Surely he can’t be serious!’ the minds of the audience no doubt chime in unison with the panicked voices of the tower controllers on screen. ‘I am serious, and don’t call me Shirley,’ Sully barks in response. He doesn’t, but the line was only taken out on account of mild plagiarism – probably. But the tension is immense, impressive, effective, and Hanks puts on a brilliant performance, as does Eckhart in his supporting role. Missing its critical final hit only slightly for the sake of intertwining a hint of comic relief into its final moments, it’s a far cry from Gran Torino and Mystic River. But with its implications of James Joyce-esque perception and the power of basic humanity, Eastwood’s latest has inarguably flown its wings in the right direction.

Sully, directed by Clint Eastwood, is distributed in the UK by Warner Bros. Pictures. Certificate 12A.