In this year's Raindance standout, Miloš Radović reveals one of the most honest, brutal and hillarious portrayals of death and suicide, proving once and for all that controversial doesn't have to equal offensive.

In one train driver’s lifetime, he will inadvertently kill 20-30 people.

The tagline of Miloš Radović’s new ninth feature film is amply bleak, to say the least. And with an opening scene that involves the brutal manslaughter of six men in a van, followed by a gruesome description of the bloody separation of their limbs, torso and heads, it’s hard to imagine Train Driver’s Diary to be anything close to whimsical. But against all odds, that’s exactly what it turned out to be, constantly and consistently, earning one of the most thunderous applause to grace this year’s annual Raindance Film Festival.

It follows long-term train driver Ilija (Lazar Ristovski) as he cruises the train tracks of Serbia with the most ‘manly-man’ demeanour to rival even that of Tyler Durden or Maximus Meridius (though all the killing and murder and sticky stuff like that he takes on somewhat differently). He comes across a ten-year-old boy, Sima (Petar Korać), wishing to throw himself under the thundering wheels of Ilija’s train, and swiftly takes him under his wing, whereupon Sima fills his previously empty heart with dreams of becoming a train driver too, just like Uncle Ilija. It’s adorable. As the film rolls on, we see Sima fulfil his dream but begin to realise the horrendous trials and tribulations these drivers face, and the effects they have. 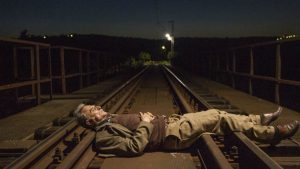 And as a film with suicide running through its veins like water through a straw, Train Driver’s Diary stands as one of the best scripts of the modern age, somehow reworking such a controversial and sensitive topic like putty in its hands into something that not only reeks of hilarity and satirical genius, but amplifies the bitter reality of suicide, making it all the more real – all whilst staying far away from the realm of the offensive. Such an impressive feat is something to be admired.

And admiration is indeed what it has justly been served, being recently announced as the official Serbian entry for ‘Best Foreign Language Film’ for the 89th Academy Awards nominations. This makes seeing it now all the more of a privilege, something I’m sure Korać is sweetly familiar with, being unfamiliar to the world of acting as only a humble sociology student. But despite such a tremendous inexperience, Korać’s performance is nothing short of absolutely award-worthy. A sequence where Sima is left to drive a hurtling train on his own having never driven a train before is a prime example, wriggling excitement and panic and heart-racing, beastly fear into one expression, into one performance. And despite Korać’s insistence to return to his studies and leave the wondrous world of film behind him, I expect we’ll be seeing more of him at some point or another. And if not, then the world of Serbian independent cinema doesn’t know what it’s missing – and neither will we.

Train Driver’s Diary is something unique, something special that only comes along every once in a blue moon, and so quickly you won’t ever know which direction to face to watch it speed by. But with such an accurate and insightful portrayal of suicide, insanity and grief moulded in such a creative, ingenious way, let’s just hope the Academy pays Train Driver’s Diary the attention it deserves, lest we watch it hurtle on by, like a train out of sight.

Dnevnik masinovodje/ Train Driver’s Diary, directed by Miloš Radović, is being shown as part of the 2016 Raindance Film Festival. Further information about the festival including screening times and ticket information can be found here.