In Miranda Bowen's directorial debut, an interesting premise makes waves with expertly used tension and perspective but lacks the clincher to fulfil any of its potential. 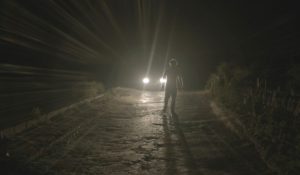 ‘I once told you about a sailor who nearly drowned’
‘Yes, he said it was like going home’
‘I lied. He said it was agony’

Some of the best horror films in cinematic history have taken place amongst those big, bad bodies of water, an element which is of both the more soothing and the more treacherous variety. Hiding the murky monstrosities that lurk below the waves, Spielberg’s Jaws is an obvious one, closely followed by Piranha, The Creature from the Black Lagoon and, obviously, Mega Shark vs Giant Octopus. The cataclysmic power of the ocean itself is also often a prime source of hit-movie material, 2012, for instance, or The Perfect Storm or even Titanic. But lurking in the shadows of these films is a more untrodden area of ocean exploration, the more metaphorical, claustrophobic realm of the human psyche and the danger that it inevitably brings on board. Gozo, named after an island in the Maltese archipelago, acts as one of the area’s pioneers, using its sense of place and questionable waters to explore grief and the limits of human sanity.

In a satisfactorily uncomfortable first seven minutes or so, we find ourselves with Joe’s girlfriend walking in on him getting down and dirty with another woman before swiftly following her to a nearby river where she promptly drowns herself. Six months later, and Joe and that other woman, otherwise known as the central character Lucille, are as happy as ever, play-fighting, laughing and just generally being frustratingly adorable as they travel to live on the island of Gozo to escape those pesky demons of the past. But the island seems to be carrying out a plan of its own; it plays with the couple like a cat swats a mouse between its paws, until their sanity can take it no longer.

Pretty solid premise, right?  From the offset we aren’t meant to like these characters, we don’t even have to relate, we just have to have some level of interest piqued. Tension is built gradually and solidly, up and up, as the suicide isn’t even acknowledged until the halfway mark and the film’s chief perspective shifts to and fro- a power play between Lucille and Joe, wrapping its audiences’ interest expertly around its little finger like a coil. That is until the screen goes black and the credits start rolling, the film’s third act completely dissipates. What was meant to be the climax, apparently, appears more as a plot point to send us into a third act which is immensely non-existent, and we are left with a frustratingly uneven ration of questions to answers.

Gozo, whilst brandishing some solid performances that could really propel both Joseph Kennedy’s (Joe) and Ophelia Lovibond’s (Lucille) careers into the stardom stratosphere (if the film were twenty minutes longer or had an executive editor who didn’t want to send the film into crash-and-burn mode), strikes out and completely misses the mark. Where we were promised horror, we got one jump-scare and a whole lot of idling around and less than subtle hints of grief-stricken insanity, all of which would have worked superbly if left simply in short-film form. But director Miranda Bowen has clearly got vision, let’s move onto the next one, and leave Gozo in its watery grave.

Gozo, directed by Miranda Bowen, is being shown as part of the 2016 Raindance Film Festival. Further information about the festival including screening times and ticket information can be found here.