Though mildly amusing in small doses and brandishing some genuinely catchy, if not downright hilarious songs, The Lonely Island's latest project results in nothing more than an SNL digital short extended to the point of mundanity.

From the names that gave you the iconic Saturday Night Live sketches and digital shorts ‘Like A Boss’, ‘YOLO’ and ‘I Just Had Sex’, comes musical mockumentary Popstar: Never Stop Never Stopping, the latest project of The Lonely Island, made up of Saturday Night Live veterans Andy Samberg, Akiva Schaffer and Jorma Taccone. In a world where documentaries following the great and bountiful popstars of our time are a regular occurrence – Justin Bieber’s Never Say Never paved the way back in 2011, closely followed by One Direction’s This Is Us and Katy Perry’s Part Of Me – it seems almost inevitable in retrospect that The Lonely Island trio and comedy-writer legend Judd Apatow (behind the producer’s steering wheel this time) would join together to create a satiric odyssey into the world of those great and bountiful popstars. Under the spotlight this time is Samberg’s Conner Friel, aka Conner4Real. 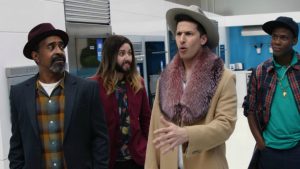 Conner was once one third of the iconic pop-group of the late 90s, The Style Boyz, along with childhood friends Lawrence Dunn and Owen Bouchard, the former who has now grown a beard and works as a farmer in Colorado, the latter who has been demoted to Conner4Real’s DJ, remaining a part of Conner’s band (meaning he presses play on an IPod). With the release and subsequent flop of Conner’s second solo album, Conner’s road to redemption forces him to do whatever it takes to stay in the spotlight – including an affiliation with a household appliance brand (his tracks are uploaded to every refrigerator, microwave and tumble dryer in the country), a reliance on cheap gimmicks (Daft Punk-esque helmets, magic tricks and gyrating women – in no way an exhaustive list), and proposing to his girlfriend of six months with the help of a pack of wolves. #Drama ensues.

Whilst these all sound like events which may or may not have or may or may not will take place at the hands of a certain Mr J.B., Popstar’s satiric play on stardom and the ever capitalised world of music misses the mark. Nearly every scene has a laugh or two somewhere in there, but they’re far from big, even further from audible. The jokes seem obvious and already too-played-out, its mockery a little too half-hearted to be even mildly memorable. And whilst I’m a sucker for cameos, there were little of the hefty list of celebrity guests I was more than mildly entertained by. Only Simon Cowell, Emma Stone and Justin Timberlake make more than a scratch of impact and even then, the reaction is fleeting. Apart from Timberlake, because of course he is brilliant paired with Samberg, as any SNL fan will know. 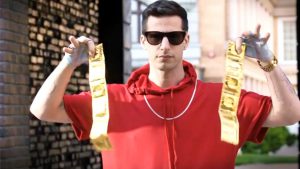 image via collider.com, by Universal Pictures

As the 86-minute run-time ticks on, it becomes more and more evident that Popstar’s storyline is almost as inept as its central character. Something more suited to a Saturday Night Live sketch, the plot goes from being the great comedy you didn’t know you needed until now, to a thin line of cheap laughs and tiresome character-arcs with frustratingly little depth that appears to be less purposeful and objectively satiric than merely a result of shoddy writing.

Songs like ‘Equal Rights’ (‘I’m not gay, but if I was I would want equal rights/ I’m not gay, but if I were I would marry who I like (not gay)’), ‘I’m So Humble’ (‘It’s not a competition but I’m winning, you won’t hear me admit it, because I’m so timid and submissive/ I treat people like they were thin, talk simple for the dumbos/because I’m so humble’) and ‘Mona Lisa’ (‘Mona Lisa, you’re an overrated piece of shit/ with your terrible smile and your dead shark eyes, and a smirk like you’re hiding a dick’) are the film’s saving grace, with preposterous lyrics indistinguishable from the very style they are caricaturing. Sadly, the rest of the film can’t be considered with as many complimentary words. Looks like Mona Lisa isn’t the only ‘overrated piece of shit’ around here.