Ira Sachs' latest odyssey into the lives of extraordinary ordinary people undertakes both the most simple and complex themes of being on the cusp of adolescence and the test of unconditional friendship in the face of far deeper tensions.

Ira Sach’s latest venture into the lives of New York City dwellers, following Love is Strange and Keep the Lights On, comes in the form of Little Men, a film blindly and blissfully following thirteen-year-old Jake Jardine as he moves to the wondrous land of Brooklyn after his grandfather dies. There he meets Tony, a fellow ‘little man’, whose mother owns the struggling dress shop on the bottom floor of the Jardine’s inherited apartment, putting the boys at the start of a fantastical, infinitely possible friendship, and their respective parents on either side of a rather messy business dispute. Yikes.

But Little Men has charm up to its tiny eyeballs. Consumed with the story of the everyday, it channels only the most ordinary of people with the most ordinary of lives. And of course, as Sachs’ work has evolved, that makes them all the more extraordinary, and the film all the more likeable. Each character has depth and gravity, made distinguishable most prominently by their relative ages. The old are the wise, the young are the innocent, as it goes, but Little Men manages to manifest its complexity in the idea that the two aren’t parallel opposites, nor are they mutually exclusive. In fact, Little Men goes as far to say that the two stereotypes are, perhaps, something of the obsolete.

Films without the diehard car chases of the Bourne franchise, or the sunlit showdowns of The Lord of the Rings, or the heart-pumping choreography of The Avengers, are films that inarguably require a strong script and complex characters to have any realistic chance of succeeding. Countless times we have seen the demise of the everyday film – Eagle vs. Shark, for instance, or Dan In Real Life – a fate which, fortunately, Little Men does not fall victim to – for the most part. The best kinds of scripts are the ones you don’t pay exclusive attention to; the best kinds of characters are the ones you do. Little Men hits the nail on the head in both departments, with a myriad of flowing, unhalted dialogue, and several fleshed out, transformative characters with anything other than ‘little’ interest. 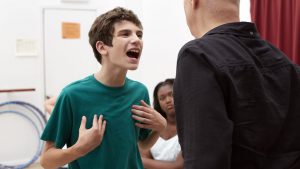 Specifically, Gregory Kinnear’s Brian Jardine and Michael Barbieri’s Tony whose performances shine out from an already glittering background. Kinnear plays a role somewhat pigeonholed for his acting talents, a conflicted father, a warm family man with good intentions and more regrets. Still, it’s a near flawless performance, and steers clear of the realm of the mundane – an understandable enough track given how ordinary his character is. There’s something special about this performance, maybe it’s the dialogue, maybe it’s the maturity, whatever it is – Kinnear’s done it again. Props to that guy. As for Barbieri, an outstanding performance showers his character with impressively more compelling features, aspects and lines than the protagonist. Somehow he captures the years of the cusp of adolescence with expertise, the years of the unconditional friendship, the clumsy pursuits of romance, the ignorant ambition – all expertly, even maturely, handled, and in only his first feature film.

Little Men isn’t daring. It isn’t edgy, or all that profound, or even too exciting. It’s not going to change your life, but it will make you take a closer look at it. And it knows it’s doing that, it knows what it wants to do – which I respect. Think along the veins of Little Miss Sunshine. And there isn’t anything, not in the slightest, little about that.

Little Men, directed by Ira Sachs, is distributed in the UK by Altitude. Certificate TBC.