Simon Dixon's directorial debut places him solidly in the realm of the terrifically average, as glittering scenery, magnificent visuals and lavish cinematography prove to do only so much in creating anything resembling satisfaction.

Adapted from the stage play, Radio Luxembourg, Tiger Raid marks Simon Dixon’s directorial debut, a story of two lawless mercenaries (Brian Gleeson and Damien Molony) as they make their way across the unforgiving desert to carry out the kidnapping of the daughter of a millionaire, a kidnapping which unequivocally goes awry and leaves the pair in the depths of their distrust for one another, and themselves. It’s a film with a tantalising premise, offering two morally ambiguous protagonists with the blood-stained backgrounds to match, but one that fails to follow through, dropping all subplots and plot points at once in one painfully tense scene, like a jammed up pinball machine. 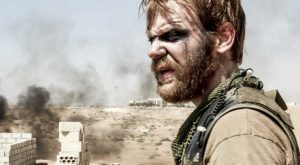 Visual lavishness and cinematographic genius are one of the only saving graces of Tiger Raid; kudos to cinematographer Si Bell. Interspersed between hefty chunks of stilted conversation, a myriad of fast-and-hard violence, and tedious nods to a sea of potential red herrings, the stunning visuals offer an awe-inspiring alternative to falling asleep right there and then, lullabied into a comatose state by the infinite 20-minute servings of direct conversation which fail to furnish such a method of skipping quickly over important details with any action or any means of keeping its audience from nodding off. Then again, the frequent jump-scares (oddly fitting for the genre it confines itself to) help with that too, somewhat.

With just three characters and a whole lot of time to fill, character chemistry and script are two of the most important tick boxes to check. Coming out the other side, only one of them really offers anything resembling satisfaction. And with an actor from the famed Gleeson family (who have spawned actors of the likes of Brendan and Domhnall Gleeson) heading the three-man cast, I’ll let you guess which one of those boxes came away ticked. 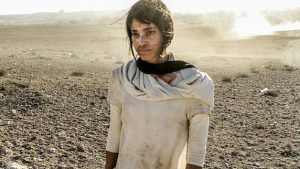 As for the script, it is impossible to offer much in the sense of complimentary words. Lulled into a comatose state for the first forty minutes or so, things only really begin to pick up after distrust manages to manifest itself deep into the heart of the two mercenaries. After all, trust is all they have when they blindly follow the invisible, god-like ‘Dave’ into the realm of loyalty, self-worth, and mistakes of the past. So, after it starts to unravel and the lies begin to take hold, the tension Dixon was keeping solidly in the more mythological domain of the present and the absent rears its head finally, with the overbalanced speed of a runaway train. And that’s when things start to get interesting. Unfortunately, it’s a tad too little, too late, with every plot point saddled on us in the last twenty minutes, creating a haze of confusion and overly twisted plot-twists which can only be appreciated in methodological retrospect as you piece together what must have been that big twist, or that other big twist, or that big twist earlier on. And even then, I’m only filling in blanks. And just a forewarning here, there are a lot of blanks.

Tiger Raid gives the impression of an idea for a short film that was stretched out beyond its capabilities to become feature length, and it’s something that – if done in the same way – would have unquestionably worked as a short film. Perhaps given its sourcing as a stage play, a feature length would have been thought of as its natural evolution but, in the case of Tiger Raid at least, this is not the case. Mouth-watering visuals and sparkling chemistry, as Tiger Raid has proved, are just not enough to carry a film through, unfortunately. What results is a frantic bundle of psychological thrills which sizzle under the vicious lamp of the desert sun, but simply runs out of gas too soon to mark it as anything more than viciously average.

Tiger Raid, directed by Simon Dixon, is distributed by Altitude Films, and is released in select cinemas on 7th October 2016. Certificate TBC.