Pixar's latest in a string of sequels turns out to be one of their best projects. Completely heartfelt, compassionate and laugh out loud funny, Finding Dory will be a film even Dory herself would remember.

Sometimes, if done just so, nostalgia can be a force to be reckoned with. It can be the fire in the belly of a blockbuster, the driving force of a film that turns out to be something amazing, something wholehearted, something very nearly as good as its predecessor. Finding Dory, whilst inclining towards nostalgia to gage much of the film’s direction, swims to a new place completely. Some place with eerie beauty and striking depth, catering to both the younger quartile of audiences, and the older (and rightly so, perhaps, having waited so long), and expertly showcasing Pixar’s capability to combine tender sweetness with dazzling, preposterous, utterly stupid laugh out loud moments. Entire scenes are soundtracked by the uncontrollable, belly laughs of the audience, unaware if the tears rolling down their reddened cheeks are from their own wild cackles or from the bittersweet scene that came five minutes before (ahem, I’m looking at you, shell scene). 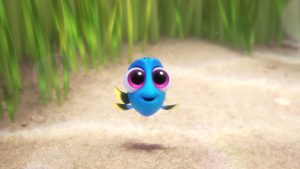 Making a start by paying a visit to the short-term-memory sufferer Dory’s (Ellen DeGeneres) infancy, she is cared for by two loving parents (Diane Keaton and Eugene Levy). Getting promptly lost, she spends years swimming the oceans, eventually forgetting who she’s supposed to be looking for. Enter a frantic Marlin (Albert Brooks), and so begins the events of Finding Nemo. One year later and a minor accident triggers a washed-up memory of her past, and the three fish are propelled on an epic journey to find where Dory really belongs.

Although brandishing a slightly different framework to Finding Nemo,  it’s all very ‘lose Dory, find Dory, lose Dory, find Dory’, losing her in one scenario before panicking and swiftly finding her in another. Still, it’s the emotional complexity of ‘being found’, ‘being lost’ and losing someone that nudges its way to the surface and gives the film its integrity, so perhaps we can forgive the contrived formulation it had to take to get there. 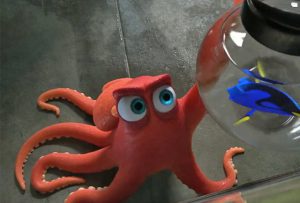 There’s a distinct lack of villainous activity in Finding Dory, in fact it becomes clear that the perils of just negotiating life, with or without a disability, provides a nefarious enough flavour for the film to indulge on. But replace Dory’s short term memory loss with autism, dyslexia, a speech impediment, anything that leaves a child unable to navigate the choppy waters of an intrinsically unnavigable world, and the film’s message on disability becomes soft, empathetic and clever.

Whilst some disabilities are highlighted, Dory’s memory loss for instance, and written as both a source of comic relief and a means of directing empathy and understanding towards its real-world reflections, others are quietly mentioned but reject sharp focus. Allowed to exist, they do anything but consume the life and struggles of the character to the extent that a little unempathetic curiosity might creep in. Hank the octopus, or rather, “septapus” (Ed O’Neill), a short-tempered sea creature who winds up helping Dory, isn’t ever set back by his lost tentacle; the notion is never even touched upon. As for Nemo, whilst his disproportionate fin was a point of conspicuousness in Finding Nemo, isn’t subjected to commentary at all. Other characters, many and most who have disabilities of some kind, are encouraged to be a part of a wider community. It’s these kinds of options which allow Finding Dory to have the depth it ends up revelling in. And it brings a whole new impact to the now-iconic mantra of “just keep swimming”.

Utterly heartfelt whilst embracing its comic capabilities, Finding Dory showcases its compassion and humanity expertly. And for a studio famous for its merciless extortion of emotions (the opening sequence of Up, for instance, or much of Inside Out), they’ve dialled down their shattering emotional pull, in order to stay on level with Finding Nemo. I, for one, am glad that nostalgia sells. Who knows how Cars 3 will pan out (or perhaps we do – no judgements here…), but Finding Dory was a long time coming, and boy, was it worth it. It might be a story solely about fish, but Pixar’s latest is one of the most human stories they’ve ever told.

Finding Dory (2016), directed by Andrew Stanton, is distributed by The Walt Disney Studios, certificate U.