Captain America: Civil War lives up to (and then surpasses) all the hype, providing one of the most satisfying superhero experiences of all time.

There was a time (only a few years ago), when a new MCU team-up movie was a monumental, earth-shaking event. Whilst the individual films have more-or-less remained at a consistent level of quality, that sense of specialness has faded over time. After all, by the time we got to Age of Ultron, seeing these characters on the big-screen was quite a common occurrence. Captain America: Civil War seeks to address this problem by reintroducing some spark into the superhero genre. This comes in the from of a twist on the traditional formula, by putting our heroes in an entirely new situation, that being the eponymous internal conflict. Promising to feel unlike any of its predecessors, the film brings to the table a more compelling scenario, in which our heroes battle with their own allegiances and long time allies.

Which is an admirable ambition. But can it actually deliver? Can the Russo brothers perfect the delicate balancing act of juggling dozens of pre-established characters’ motivations and arcs, all at the same time as introducing new ones? Can the film hope to capture its intended sense of scope and still function as a satisfying Winter Soldier sequel? Will Civil War be the spectacular event many are anticipating, or will it be an unstructured and underwhelming mess? Can I pad out this review further with more tenuous rhetorical questions, all in an attempt to conjure up some paltry suspense?

Okay, enough stalling. Civil War is absolutely, positively, unbelievably (deep breath now)… brilliant. Happy? I said it! By now you’ve likely read a whole heap of reviews proclaiming it to be ‘The Best Marvel Film Yet’, so this is unlikely to come as a shock. Still, those critics might be right. It’s certainly in the top 3. 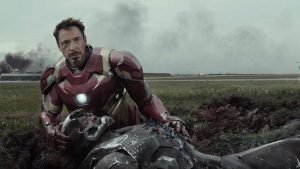 The narrative is broadly concerned with The Sokovia Accords, a government document signed by over 100 countries, intended to regulate the Avengers, transforming them from a private organisation into a UN managed task force. After a catastrophic event near the opening of the film, the heroes are given an ultimatum, whereby they must either agree to the UN’s terms, or be forced into retirement. There is, suffice it to say, a difference of opinion, with Captain America (Chris Evans) and Iron Man (Robert Downey Jr.) leading the opposing sides. Whilst this initially results in nothing more than a small disagreement, the issue is complicated exponentially when Cap’s wanted ally/friend James Buchanan ‘Bucky’ Barnes (aka The Winter Solider) is thrown into the mix. What follows from there is an increasingly high-stakes tale of globe-trotting action and friends turning against one another.

Unusually for a Marvel tent-pole film, there is no apocalyptic threat facing the world, or any kind of city wide peril. The tension here is entirely located within the team, which is refreshing to say the least. Moreover, Civil War does an excellent job of having you understand everybody’s motivations, and you will likely spend a good portion of its runtime flipping back and forth between the two sides. Neither one ever feels villainous or irrational, and as new pieces of information are revealed, the moral dilemmas are exacerbated even further. This makes Civil War Marvel’s most nuanced and complex film by a mile, but at the same time it’s remarkably coherent and entertaining.

Crucially, this sense of duel allegiance doesn’t mean that the action is any less enjoyable. Far from it, the fights become all the more engaging as a result. We’ve seen some of these heroes fight in the past, but never quite like this and never with this sense of jeopardy. Additionally, on a technical level the set-pieces are extraordinary, as the Russo Brothers take the promise they showed in The Winter Solider and build upon it. Conflicts in the first half are pleasingly practical lead, with an emphasis on fantastic choreography and terrific stunt work. One brawl between Cap, Bucky and a stairwell full of special forces is especially noteworthy, playing with the vertical dimension of the location in an interesting and unique way.

Of course the real stand-out is the highly publicised airport battle sequence, which is by a long way Marvel’s best set-piece yet. It’s one of the most gloriously comic-booky moments ever committed to screen, and despite running on for nearly 20 minutes, it constantly innovates and shakes thing up. All of the surprises and intricacies of the scene have been smartly concealed by the marketing team, so it would be a crime to give too much away. However, it’s worth stressing that every single character gets their moment to shine, and the inventive match-ups in opponents create some phenomenal action. 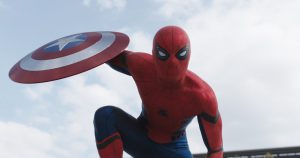 The Russos also manage to make you care about characters you had minimal investment in before. It’s rare for a movie of this scale to have so many stand-out players, but special mention should go to Tom Holland’s immensely charming Spider-Man and Paul Rudd’s returning Scott Lang. The latter gets numerous scene-stealing moments in the airport sequence, displaying even more charisma than he did in his own standalone adventure. Meanwhile, Holland’s Peter Parker is easily the most true-to-the-source iteration of the character yet, capitalizing on the web-slinger’s trademark enthusiasm and energy in a way that even Garfield and Maguire failed to capture (don’t hit me).

As for Daniel Bruhl’s Baron Zemo, he could have been yet another entry in Marvel’s so-so villain roster, but despite a frustrating lack of screen-time, he does make a good impression. He achieves that rare blend of menace and pathos that so many other villains miss, with neither side of his character compromising the other.

Of course this was always Cap and Bucky’s story, and as someone who has never been able to connect to their supposedly touching relationship, I will concede that the Russos finally made me care. Yes, Civil War eventually melted my cold, cynical heart. Although to be fair, it did this by actually devoting a reasonable amount of time to their bond. In fact, much to my surprise, Civil War generally succeeded in the emotional stakes department. Marvel films have pulled off many things in the past; incredible action, smart humour, and well handled fan-service, but this is the first time I ever found myself feeling remotely affected the by dramatic scenes. Not only that, but the intense final act convincingly sold the idea that anything could happen, and that this could have massive repercussions on future MCU instalments. 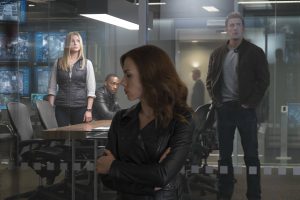 Now with all that said, it’s not perfect. There were still a couple of characters who felt bland and uninteresting (*COUGH* Vision), and some of the cutting is a little too frenetic. This last criticism is an especially curious point, seeing as the action is all well executed and performed. This isn’t a case of hyper-editing being used to cover up directorial incompetence (ala Oliver Megaton). Instead, it feels more like a conscious aesthetic choice used to keep up the pace. Nevertheless, it remains true that certain sequences are a tad incoherent, more so in the first half when the action goes for a more realistic feel.

Some minor nitpicks aside (and they are nitpicks) Captain America: Civil War is still one of the best comic-book movies of all time, and that’s not hyperbole. Rarely do blockbusters get so many different things right, but the Russos have managed to tell a complex story, filled with characters, and still make it so that everything feels properly developed. The fact that they’ve been able to do this and still make time for well-judged humour, smaller intimate moments and incredible action is just the icing on the cake. It basically delivers on ever level. As a result, it’s been a long time since a superhero film had me this excited for the future of a franchise.

Oh and there’s one post credit bit, so stick around for that.