Dark, ominous, and full of atmosphere - The Witch will have you gripped from start to finish.

Robert Egger’s directional debut, The Witch, is a testament to modern horror (an ironic statement in the face of its period backdrop), a film that will leave you with a pervasive feeling of discomfort that lingers long after the closing credits have rolled. Set in rural New England decades before the Salem witch trials; the paranoia, dread, and helplessness of those affected by ‘witchcraft’ is bone chillingly reiterated through Egger’s cinematic style – immersing the audience in a tangible reality where the ladies of the wood are much more than just whispers and folk lore. Tense, expertly paced, and utterly involving from start to finish, the film has set a standard for the newly tested director to live up to in coming works. 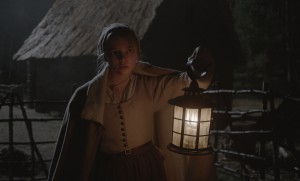 (Anya Taylor-Joy), the film is focused around a religious family of five, who have been outcast from their village due to an enigmatic dispute over Christian values. Patriarch of the family, William, (Ralph Ineson) condemns those who banished them; deciding to start afresh on a small farm surrounded by overgrown woodland. Intent on providing for themselves away from the lacklustre standards of the Puritan community that shunned them, the family work hard to keep themselves sustained – but the strain on the family and stern wife Katherine (Kate Dickie) becomes too much when the crops begin to fail and they are menaced by an evil outside of their understanding.

In a sick game of peek-a-boo between protagonist Tomasin and baby of the family Samuel; we see the latter snatched in the blink of an eye by a hooded figure running through the woods – and the mental stability and moral reasoning of the family begins to fray from there on out. With Tomasin being the last person to be with Samuel upon his seemingly paranormal disappearance, and the connecting factor throughout the film to each disturbing event – the unspoken question lies throughout the plot of whether the titular witch is in front of us all along, whether there are entities in the woods, or if it’s all in the heads of the stressed-out and frightened family. Accusations, uncertainty and a deeply unsettling sense of dread run thickly throughout the film; culminating in a third act that offers a brutal pay-off for the agonizing tension that is suffered for the first hour.

Reminiscent of slow-burn horror that relies on atmosphere and mood (a trend in a few recent releases, such as The Babadook and It Follows), The Witch plays on your fears of things-that-go-bump-in-the-night with a subtlety that is artful in its execution. Utilising a haunting choral soundtrack of devilish chants and harsh, clashing strings, the music plays a small but vital part in accentuating the terror at the heart of the movie. However, it is the beautiful manipulation of silence that says more about Egger’s artistry and the dark themes of the film – relying on the strength of performance, setting and atmospheric clarity to create fear and tension in the audience. This is also reflected in the depth and definition of the cinematography when traversing the ominous wood and grassy farmland. 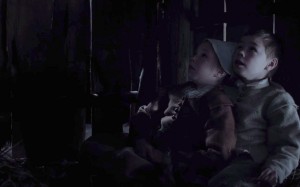 The film would not have the effect that is does without true commitment to character, and this sense of superb characterization can be found in each and every one of the actors on screen. With a cast compromised of almost entirely children, finding capable and believable performances would be a difficult task – however, from the unruly, mischevious and unsettling twins Mercy (Ellie Grainger) and Jonas (Lucas Dawson), to the soft, sensitive and confronting younger brother Caleb (Harvey Scrimshaw), there isn’t fault to be found. With the entire cast mastering olde English in such a way that it doesn’t feel clumsy or awkward, and offering authentic commitment to their role – the actors couldn’t be more essential to the film’s success. This is especially true as we are infrequently offered more information than what’s in the moment, and explanations are rare throughout. We rely on the characters to lead us through the film and relate what little knowledge they have about what’s going on in their reactions. This lack of background information plays to the film’s advantage; never offering justification for its choices until the very end – with a message stating that a lot of the events of the film were taken from journals at the time of the Salem witch trials; a confused, uncertain and needlessly barbaric period in itself – reflected aptly in the narrative.

The only fault that one could find with the film is its pace – but I would argue this is an intrinsic part of the payoff at the end. It is definitely slow and arduous, but this only serves to further distil the sense of isolation and powerlessness of the characters. It’s intense, it’s drawn out, it’s unsettling – it’s clever and fits the film’s aesthetic, rather than hindering it.

Overall, The Witch is a wonderful, short piece of cinema that portrays perfectly a time long forgotten; embedding itself in the world values of the 1630s wholeheartedly. Playing on tension, dread and a deep-rooted primal fear in its audience, The Witch offers no remorse – an act of spectacular craftsmanship that stays in your thoughts and leaves you questioning everything until the very last moment.