A couple of flaws aside, Deadpool is one of the most enjoyable comic-book films ever made and is an early contender for funniest film of the year.

Given the immense hype surrounding Deadpool, you’d think that Fox could lazily churn out anything with his name attached to it and the public would be content. There was a palpable sense of relief felt by fans, after learning that the character was finally going to get proper big screen treatment after his…. curious handling in X-Men Origins: Wolverine. They’ve been waiting so long for the character to make an authentic cinematic début, that at this point they’re just happy to know that the film simply exists. It’s a pleasure to report then, that Deadpool is more than just a cynical cash-grab with the intention of exploiting optimistic fanboys. In fact, it seems to have been crafted with an extreme level of affection and reverence for the material.

This is well and truly a passion project for star Ryan Reynolds (who also serves as a producer), Zombieland screenwriters Rhett Reese and Paul Wernick, and of course, first-time director Tim Miller. The resultant film may not be perfect, but it oozes with care and devotion. Deadpool is surely one of the most faithful comic-book movies ever in terms of capturing the spirit and essence of the source material. Every element that is crucial to Deadpool’s identity is firmly in place, from the pitch-perfect slapstick comedy, to the snappy quips and the wonderful meta-humour.

Revelling in what makes the character unique, rather than restraining him as in his previous outing, Miller and co. are able to fashion a film that feels unlike any other. Sure there have been violent and sweary superhero films before, but Deadpool brings something new to the table with its self-referential humour and unrelenting pacing. It’s true that a substantial portion of the screen-time here is devoted to dick and masturbation jokes, but A) most of them are actually funny and B) there are enough moments of sharp post-modern humour to satiate fans of the source. To do the douche-bag critic thing of saying that there are great jokes and then spoiling them would be a massive disservice to the excellent writing of Reese and Wernick, although it’s worth pointing out that some of the strongest comedy is purely visual anyway, be it from a stylish directorial flourish or the kinetic body-language of Reynolds. 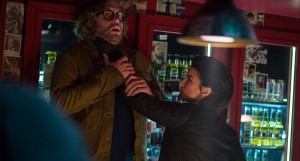 It goes without saying that the latter is perfect in the role of Wade Wilson. Nevertheless, the man deserves praise for nailing the cartoonish mannerisms of the character, as well as for his spot-on comedic timing and effortless delivery. Generally the whole cast does a pretty great job, from Ed Skrein’s above average villain, to Morena Baccarin’s refreshing love interest. The biggest surprise though is probably T.J Miller as Wade’s associate ‘Weasel’. In the past, Miller has only been able to occupy one of two roles, the bearable comic relief (Cloverfield) and the unbearable comic relief (Transformers: Age of Extinction). Luckily, in Deadpool he manages to deliver his most charismatic performance yet, stealing some of the film’s best lines and working in some great improvisation.

The film isn’t entirely devoid of problems however. For a start it chooses to structure itself as a traditional origin story (albeit one told in a mid-fight sequence flashback), which does get in the way of the anarchic fun of the rest of the experience. Obviously some kind of backstory is needed and there’s nothing particularly wrong with the one presented here, but it does add a tinge of convention to a film that takes so much pleasure in doing its own thing.

As well as this, there are the obvious budgetary constraints. It may seem unfair to criticise a film for not having the same resources as something like Age of Ultron, especially one that is so full of personality, but the evident cost limitations do have an impact on the action sequences. From the small scale nature of the climactic battle (consisting of about 13 men in a junkyard) to the sometimes video-gamey CGI, Deadpool does lack a little in the action department. Admittedly Miller makes up for this in some respects, with tightly choreographed fights that capitalise on the film’s 15 certificate. Still, there’s nothing comparable to the standout action of last year’s similarly R-rated and low-budget action films like Kingsman’s church sequence, or John Wick’s nightclub gunfight. 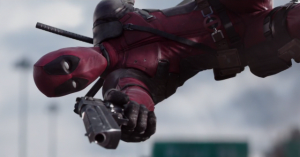 Having said that, Deadpool almost manages to get away with its cheapness, thanks to Wade pointing it out in his recurring fourth-wall breaks. Moreover the more creative moments of Deadpool are far more engaging than the mind-numbingly bland pyrotechnics of Man of Steel, so scale isn’t everything. The film itself takes more than a few jabs at its big budget contemporaries, particularly the X-Men movies and the aforementioned Wolverine film. Origins is the subject of prolonged derision, with several jokes revolving around the film’s bizarre decision to sew Deadpool’s mouth shut and thus rob him of his trademark personality.

Irrespective of its flaws, it’s hard to be too critical of Deadpool when it’s so much fun. The jokes come at such a rapid-fire pace that even when a few them don’t quite land, they’re always followed by a gag that will send the entire theatre into hysterics. The opening credit sequence alone features more genuine laughs than most modern feature length comedies.

It may rest a little on some of the cliches that it mocks (ie: the origin story) and the action sequences never quite thrill in the way that they should, but Deadpool takes full advantage of the creative potential offered by its titular character and will likely prove to be the most fun comic-book movie of the year, and quite possibly 2016’s best comedy as well.

Deadpool (2016), directed by Tim Miller, is distributed in the UK by 20th Century Fox. Certificate 15.