Indian cinema is humongous. With more than 20 regional industries, it has transformed its global reputation as an enthralling entertainment industry both within and off the shores of India. Amid these variations within cinemas, three particular forms of cinema have stood apart in terms of gross film production and thematic experimentation: the film-industries of Bombay, Bengal, and Tamil Nadu. This significant trio become the subject of our discourse here, as I attempt to unravel five films from within these cinemas that have crossed the borders of relational politics and cultural melange. At times, Indian films are accused by foreign audiences of being relatively functional within the limits of Indian topographies and idiosyncrasies, typically abandoning any scope for the construction of relationships between the foreign on-looker and the Indian character depicted on-screen. This has been a conundrum across world cinemas that affects not only their capital profits, but also their reputation and influence within global politics, economics, and potential fandom; and so, it’s not just Indian cinema that suffers through this problematic. Nonetheless, these five films have astonished viewers both within and off-India — leading to the formation of a major cult-following — via their interest in difficult, unconventional themes that yet remain identifiable across a sea of cultures. These films raise the bar for Indian cinema, and also paves it through international stardom. 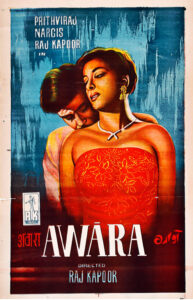 Designed as a social critique, this semi-romantic tale of atonement places three characters at a triangular junction and partially pits them against one another. Surprisingly, it’s a divided family that dilapidates due to the stubbornness of the patriarch (Prithviraj Kapoor), who refuses to accept the biological lineage of his son, and abandons his pregnant wife (Leela Chitnis), who later finds refuge in the horrid slums of Bombay. What follows is a pathos-evoking story of crime and punishment, tracing the myriad themes of feminine resistance, stigma and society, poverty and desperation, and rich vs poor. What remains at the intersectional junctures is the presence of love, maturity, and compassion, epitomised by Rita (played by Nargis). It transforms director R. Kapoor into the auteur of romance and national spirituality. Indeed, a brilliant watch, and it doesn’t matter if you are from India or not; you’re going to feel all of it. 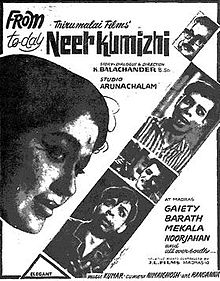 Neerkumizhi became famous for two popular reasons. One, it was the directorial debut of K. Balanchander, who went on to becoming one of the most popular, iconoclastic filmmakers from the Tamil film-industry, and two, for its unconventional thematic inclination to depict rivalries between siblings that became a prominent influence for many narratives within Bollywood across the 70s – 90s. Balachander is sharp to introduce pockets of comedy and sentimental drama, so as to sustain the balance between romance and conflict, quite in vein of the classical tragicomedies of Shakespeare and John Fletcher. The narrative follows a peculiarly identifiable pattern of classical traditions, transforming the drama between romance and greed, comedy and satire. 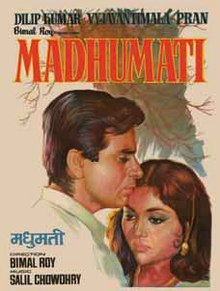 Clearly not a one-time watch! Bimal Roy’s 1958 paranormal romantic tragedy remains one of the most iconic box-office and critical successes to date. Not the one that would boggle-up your mind, but, indeed, the one that provokes questions about immortal, unspoken love. I deem this film an extremely Indian narrative for its exploration of themes like reincarnation (a consciousness that finds its roots in Hinduism), and I believe that this idea divorces identification from a foreign perspective. Yet, I consider the film a crossover product for the cult-influence it exhibited on Indian cinema and the genres of Gothic and Paranormal, and the development of future film-studies on South-Asian cinema(s). 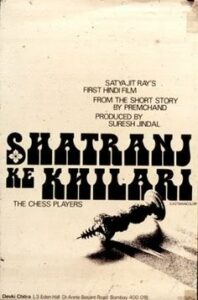 Satyajit Ray’s vision was composite, and it bespeaks through this historical parallel: narrating the unfortunate tale of the annexation of Awadh (a princely Indian state) in 1856 by the British East India Company, and the damaging decadence of the elitists (epitomised through the self-absorbed aristocrats, Mirza Sajjad Ali and Mir Roshan Ali, who fancy chess). The poignant cinematography not only breathes life into Premchand’s short-story (on which the film is based), but also exposes the saddening realities of the selfish gentry that paved a smoother way to India’s colonization by the British. A fantastic sneak-peak into history, Shatranj ke Khilari bemoans this incident, attacks aristocracy and patriarchy, while paying homage to the loss of India. It’s not a blame-story, but a reflection of the hypocrisy that comes alive when times are adverse and critical. 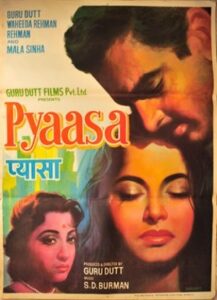 Where do we begin? I’m awestruck by the beauty with which this classic has been spread out on-screen. From the vivid character depictions to the blazing cinematography, everything is organically wonderful about director Guru Dutt’s tour-de-force. I don’t say this because I’m a Guru Dutt aficionado, but because Pyaasa has evolved into a realistic momento of the deprivation of artistic talent and artistry. It is a conundrum that still festers around us, and ergo this accounts for the contemporary nature-and-appeal of the narrative. Vijay’s pyaas (thirst) is not for commercial, but critical fame . . . this is longing to be read, studied perhaps, and even enjoyed, and it’s this longing that stays disillusioned in the film. Broken into pieces, and left for artists and writers to cry upon. Pyaasa becomes the artist’s wailing cry that nobody listens, but cannot resist hearing. Indeed, a bold stroke!

In short, these five films manifest a seismic shift in thematic and representational value. Indeed, they are harbingers in several respects, particularly in the ways through which they redefined Indian cinemas; they introduced bold nonconformist ideas/narratives, and these ideas reinstated the relational bridge between the cinema and its characters and the foreign on-looker. These movies moved away from an exclusively Indian canvas-representation and took up heavier subjects that might interest a global audience (irrespective of their knowledge about India and its people), and, thereby, crossed the boundaries of representation and identification.