There’s a scene in the Atlanta season one episode ‘Nobody Beats the Biebs’ where Lakeith Stanfield’s character Darius is chucked out of a shooting range, having caused a commotion after using a picture of a dog as target practice. Darius’ choice seems perverse initially, but when approached by enraged onlookers he calmly exclaims “Why would I shoot at a human target?” It hits you like a ton of bricks, revealing an essential truth about a hypocritical and dangerous human mindset that has never been more relevant. Whilst this is in part testament to sublime writing, Stanfield carries the scene beautifully. He’s the highlight of the show, a comedic presence whose absurdity hides the fact that he often has extreme insight to share. The actor himself, meanwhile, is shaping up to be a hell of a talent.

Lakeith Lee Stanfield was born in San Bernardino, California, in 1991. He burst onto the screen in 2013 in Short Term 12, reprising the role of Marcus – a troubled teenager living in a home for troubled teenagers – that he had played in the short film version five years previous. In fact, he was the only actor to appear in both the short and feature film. His astounding performance earned him general acclaim, including an Independent Spirit Award nomination for Best Supporting Male. It’s a cliché, but Stanfield manages to communicate so much pain simply through the movement of his eyes. One of the film’s most poignant scenes sees his character perform a rap song about his life, titled ‘Life’s Like’. Here Stanfield, a rapper and musician, captures raw emotion. Short Term 12 is one of the best independent films in recent times and simply needs to be seen. Not only because it’s very good, but because it introduced to many three supremely talented young actors: it was Brie Larson’s breakthrough role, and also starred Mr. Robot lead Rami Malek. Somehow, Stanfield manages to outshine both of them. He’s that good. 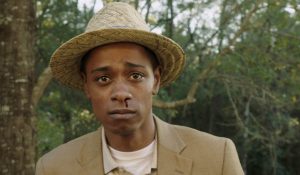 For someone who has only just got started, Stanfield has proven a pervasive presence. He’ll be familiar to horror aficionados as ‘Young Ghoul Face’ in The Purge: Anarchy, a minor role that nonetheless dominated the film’s marketing in posters and trailers. He’s briefly in Selma, playing real-life civil rights activist Jimmie Lee Jackson in the harrowing scene depicting his murder at the hands of the police. Stanfield broadened his familiarity to audiences ever further with Straight Outta Compton, where he shows up as none other than hip-hop legend Snoop Dogg. Again, it was only a small role, but by occupying such iconic cultural spaces, Stanfield has managed to make his a face that many will recognise – even if they don’t know the name. Of course, this goes without mentioning Get Out – one of the best films of 2017 and one that immediately achieved iconic status. Stanfield is at the centre of it all in a short-but-memorable role, shouting the words of the film’s title in a scene that deepens the mystery ever further.

That about sums up Stanfield’s career, bar Atlanta, thus far: short-but-memorable roles. With Sorry to Bother You, director Boots Riley has finally given Stanfield the chance to lead. The film looks both funny and subversive, with a jaw-dropping supporting ensemble consisting of Tessa Thompson, Armie Hammer, Terry Crews and Steven Yeun amongst several others. From Selma to Straight Outta Compton to Get Out, Stanfield has shown a keen interest in the portrayal of the issues of race that have plagued and continue to plague American society. Sorry to Bother You is no exception; it sees him as a struggling African-American telemarketer who works out the crucial key to success – putting on a white voice. Lakeith Stanfield, like Darius, has lots to say. We can’t wait to listen.