Josh Brolin has always been surrounded by celebrities. He has James Brolin for a father and Barbra Streisand for a stepmother. He was engaged to Minnie Driver for six months, then married to Diane Lane for nine years. His first film performance came in 1985’s The Goonies when he was still a teenager, which makes him a certified member of the ‘Spielberg Club’ – the pantheon of child actors who have given great performances under the visionary filmmaker. Yet Brolin has shied away from leading man stardom in his adult years. Instead, he has emerged as one of the most natural character actors of his generation. If you want aloof, rugged, or a pitch-perfect Tommy Lee Jones impression, your best bet is almost always going to be Brolin.

Born in Santa Monica, California in 1968, Brolin’s initial interest in the industry came not from his father, but an improv acting class he took in high school. Brolin followed up The Goonies with skateboarding movie Thrashin’, but lamented his own performance in the film so much that he decided to step away from the silver screen for a number of years. He wouldn’t star in another film until The Road Killers in 1994. In the meantime, Brolin popped up on various American television shows. His most significant TV role was in The Young Riders playing the real-life James Butler Hickok, aka “Wild Bill” Hickok, a folk hero of the Old West. 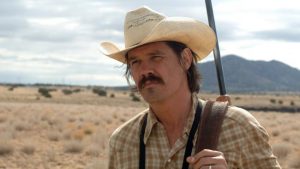 Before he truly rose to prominence with No Country for Old Men in 2007, Brolin worked with a number of celebrated directors in bit parts and supporting roles. These included David O. Russell (Flirting with Disaster), Guillermo Del Toro (Mimic) and Woody Allen (Melinda and Melinda), as well as a deranged turn in Robert Rodriguez’s Grindhouse segment Planet Terror. Then the Coen Brothers came calling. Brolin’s performance in No Country for Old Men is often forgotten, almost all the attention given to Javier Bardem’s psychotic hitman Anton Chigurh, but his Llewelyn Moss is a neo-western cowboy we sincerely root for.

2008 was a political year for Brolin, first playing President George W. Bush in Oliver Stone’s biopic W. and then murderer Dan White in Milk alongside Sean Penn. The latter earned him his first and only Academy Award nomination, for Supporting Actor (the year of Heath Ledger’s posthumous win). Brolin is the perennial supporting player, though this is a position he seems more than happy to be in. His choosiness with roles was perhaps reinforced by the misstep that was Jonah Hex, where Brolin played the titular character. The 2010 DC Comics adaptation was a critical and commercial failure, and Brolin has only just returned to top billing status with this summer’s Sicario: Day of the Soldado.

He’s been a prolific performer over the last ten years, appearing in both highbrow fare and popcorn entertainment. One of his best performances came with Paul Thomas Anderson’s Inherent Vice in 2014, demonstrating genuine comic chops as part of his usual gruff demeanour. The scene where Joaquin Phoenix’s Doc looks on in horror as Brolin’s Detective Bigfoot goes to town on a phallic frozen banana is utterly hilarious.

2014 was the same year that Brolin first appeared as Thanos in Guardians of the Galaxy, becoming a tantalising threat that has bubbled under the surface of the epic Marvel Studios saga for what has seemed like an eternity. Though he has only showed up sparingly so far, Brolin appears to bring a genuine gravitas (through motion capture) to the supervillain hoping to end all supervillains. But Thanos isn’t the only iconic comic-book character he’ll be playing this year: Brolin has signed a four-film deal with Fox to play Cable in a more human capacity (though he does sport the customary metal arm), starting with this May’s Deadpool 2. If these two roles are going to be his most-beloved, Josh Brolin will have done it his way – as the supporting man, elevating the work of everyone around him.

Avengers: Infinity War will be released in the UK on April 26th. Watch the trailer below: