The arrival of Star Wars: The Last Jedi is imminent, and with excitement for the eighth part of the saga reaching critical, I couldn’t help looking back at the previous, surprisingly divisive film; The Force Awakens.

Despite being critically acclaimed, fans have given the J.J Abrams-helmed sequel a very mixed reception. Many have raised significant issues with the film, and some have even taken to calling it the worst film in the series. And yes, the film may not be flawless, but I still believe this is one of the strongest parts of the franchise, and can easily stand tall alongside the best of the original trilogy. 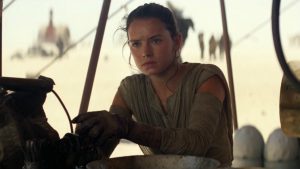 The main reason for this is the characters introduced to us in the story. Rey, Poe and Finn are all fun, likeable protagonists, and at the end of this trilogy, it’s likely that they will be heroes as iconic as the likes of Luke, Leia, Han and Obi-Wan. Rey in particular is a brilliant lead; bolstered by a star-making performance from Daisy Ridley, the character won me over from her brilliant introductory scene. I’ve heard comments being repeated online that she’s a Mary Sue; a statement I definitely do not agree with. At first glance she may appear to be overly skilled at everything she does in the film, but further inspection shows that there is justification for why she’s as good as she is (usually the Force). And in many cases, she isn’t actually that skilled; take note that she takes a while adjusting to flying the Falcon, and that she spends the first half of the final duel running from Kylo Ren. She’s a certainly a skilled character, but she has her flaws (naivety, insecurity and an initial unwillingness to fight). Rey is already in the ranks of my favourite Star Wars characters, and I can’t wait to see how her journey will continue.

The character of Kylo Ren is equally compelling. Many have stated that Kylo is whiny, petulant, and a weak villain, but they don’t seem to notice that this is the point – he’s not supposed to be a strong villain; his desperation to emulate his grandfather and follow in his footsteps, while avoiding the pull back to the light, acts as a deconstruction on the idea that being evil is cool, and it makes for a fascinating character; an evil villain who doesn’t know if he even wants to be evil. Rather than attempt to top Darth Vader, Abrams made the brilliant choice to integrate a potential weakness into the character, turn it into a strength, and ironically create a villain on par with Vader and Emperor Palpatine. 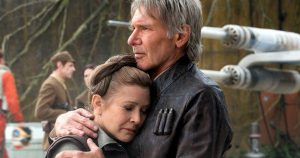 An emotional reunion for the original power couple (Lucasfilm).

Kylo’s character arc comes to a head in a fantastic confrontation with his father, Han Solo, which of course ends with the latter’s death. The scene is brilliantly directed, written, scored and acted by Adam Driver (who perfectly displays Kylo’s conflicted unwillingness to go through with the act) and Harrison Ford, who gives perhaps his best performance in the role with this film, combining the cocksure pilot of old with decades of unseen heartbreak and regrets. Despite their limited screentime in this chapter, Mark Hamill and the late Carrie Fisher give similarly great turns (who knew Hamill could convey so much emotion with just a single stare?) and I look forward to seeing more of them in The Last Jedi.

On the subject of the score, John Williams is truly on form with this one. As well as rearranging many classics for this film, he also provides us with a lovely new gem in the form of Rey’s theme, which perfectly depicts the character’s wide-eyed sense of wonder and excitement. Meanwhile, the film gives a variety of action scenes which are perfect for those (like me) who felt that the prequels were oversaturated with lightsaber duels. The flight of the Falcon on Jakku is probably my favourite scene from the film, while the skirmish on Takodana features several great gunfights between Han, Chewie and the First Order, and a memorable battle between Finn and a Stormtrooper.

The film’s climactic lightsaber duel has received criticisms of being “dull” and “too short”, but in my eyes, a short fight scene that visualises the conflict between two characters is far superior to a 10-minute long action sequence that is essentially empty spectacle. The duel is definitely one of the strongest in the series, due to its more brutal, realistic feel (specifically the injuries received by Finn and Kylo are very nasty), and focus on the characters involved, as opposed to the admittedly impressive but overly choreographed fights of the prequels. 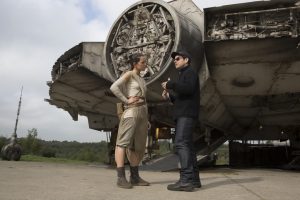 But what I really love about The Force Awakens is that it actually feels like a Star Wars film. Compared to episodes I-III, which felt dry, lifeless and full of dated CGI, episode VII actually feels closer in tone to the original films. Abrams’ direction makes the film feel as fast-paced and exciting as George Lucas’ direction for A New Hope, as well as that of Irvin Kershner (Empire) and Richard Marquand (Jedi). The action is achieved practically, making the film feel more real and engaging as opposed to artificial and dull (it’s worth noting that the film’s foray into CGI with the rathtar sequence feels seriously out-of-place). Most of all, the film carries the same sense of fun and adventure that the originals did, and the prequels were missing. Some might say that this tone makes The Force Awakens feel very “samey”, but surely it would be better for a Star Wars film to be breezy and fun as opposed to slow and boring?

Admittedly The Force Awakens isn’t perfect; several of the supporting characters (namely Phasma, Snoke and Maz Kanata) are frustratingly underexplored, and it’s disappointing to see the story resort to another “destroy-the-planet-smashing-superweapon” plotline. But despite this, I feel the film is a thrilling instalment that reminded me why I loved Star Wars, and gave me a new hope for the future of the saga.

Star Wars: The Last Jedi is released in UK cinemas on December 14th.