An exhilarating thrill ride with a proper spy story at its heart, Timothy Dalton's first appearance as James Bond is a sadly overlooked classic.

After 1985’s disappointing A View to a Kill, Roger Moore left the role of James Bond after 12 years, leaving the series without a leading man. So what was series producer Cubby Broccoli’s plan for Bond? Strip it of everything that had caused the series to devolve into self-parody and stagnancy, give the story a sense of realism and cast an actor who could convey the dark complexities of Ian Fleming’s original character in Timothy Dalton. The result was 1987’s The Living Daylights, a film that wasn’t the best the series had produced, but was definitely a move in the right direction for the franchise, and one that has proven to be quite an underrated gem.

The plot is very typical of a Fleming story, surface simplicity leading into a deeper complexity. Bond is assigned to assist the defection of a KGB agent, General Koskov, by killing a sniper that is primed to take him out, but he cannot bring himself to kill the sniper. Koskov presents information that suggests the new head of the KGB has restarted an old spy assassination unit. Bond starts to suspect that the defection may have been staged, and teams up with would-be assassin, Kara Milovy, discovering a conspiracy to buy opium off the Mujahadin and use the profits of the sales to purchase weapons to be used in the Soviet invasion of Afghanistan. 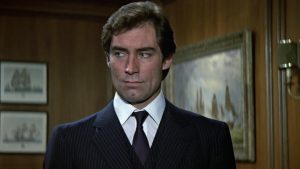 The strong Fleming-esque nature of the story is helped along by the casting of Timothy Dalton, who, in my opinion, is the best actor to play James Bond yet. This is because Dalton actually feels like he’s playing the literary version of the character; a dark, cynical outsider who easily ignores orders for the sake of those close to him, and whose burning anger is only just concealed behind his charming veneer. Look at his reaction when his ally Saunders is brutally killed: Dalton brilliantly depicts Bond’s anger and sadness as he crushes the balloon lying next to Saunders’ body and glares around for any sign of the potential assassin, showing us a man who is always on the brink of losing control of his rage. The same goes for his confrontation with General Pushkin (John Rhys-Davies); you know that Bond isn’t going to kill him, but Dalton and Davies’ performances make their scene together unbelievably tense. It may have felt jarring for audiences at the time, more used to Roger Moore’s light-hearted take on the role, but today this version feels much more welcome and accepted.

Depicting Bond as a stony faced assassin isn’t all the film does with its protagonist, the script shows a more vulnerable side to the character. Bond’s growing relationship with Kara (Maryam d’Abo) feels surprisingly tender and sweet, to the point you could imagine the pair staying together after the film’s end. It helps that Kara is a well written character; she’s not the most useful companion to have in a fight, but she can certainly throw herself into the action when push comes to shove. Also, she’s not an idiotic bimbo who acts as a complete liability to Bond’s mission, like Stacey from the previous film. Much like On Her Majesty’s Secret Service, Licence to Kill, Casino Royale and Skyfall, The Living Daylights is a stellar Bond film because it not only provides us with a brilliant story to follow along with, but also knows that giving Bond an emotional side and allowing him to connect with other characters helps round him out as an individual. 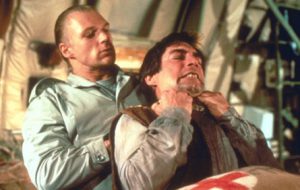 But it’s not a perfect film. Despite the positives, The Living Daylights has one very major flaw at its heart, which is the film’s antagonists. While the aforementioned films all had great villains leading them, neither of The Living Daylights’ enemies are particularly compelling; Koskov (Jeroen Krabbé) is ineffectual to the point where it becomes hilarious, while Whitaker (Joe Don Baker) comes off as an incompetent buffoon. Thankfully though it’s not a complete failure on the villain front, as henchman Necros (Andreas Wisniewski) is a terrifically threatening foil to 007. A master of disguise, with a varied range of murder methods (the guy uses exploding milk bottles for God sake!), Necros is also responsible for two of the film’s best action scenes (the safe house kitchen fight and the fight on the plane at the end). The Living Daylights presents a brilliant and underrated henchman to give Bond a lot of grief over the course of the story; it’s just a shame that the Big Bads are utterly rubbish.

There’s still plenty of great material in Dalton’s inaugural Bond outing; the locations (this time featuring Vienna, Tangier and Afghanistan) are beautiful as ever; the pre-title sequence is amongst the best in the series; there’s just the right amount of humour to prevent the film from becoming disengaging; and the soundtrack is arguably the best of the series. While it may be lacking in great antagonists, The Living Daylights still stands as a highly underappreciated classic. If you haven’t already done so, check out this instalment of the Bond series; it’s part of a brief but brilliant era that definitely deserves more love than it gets.

The Living Daylights (1987), directed by John Glen, is distributed in the UK by MGM, certificate PG.