Perhaps best known for his work on the vampire mockumentary What We Do in the Shadows, Kiwi director Taika Waititi’s newest project is the Hollywood behemoth Thor: Ragnarok. You’d be forgiven if you haven’t heard of Waititi before – despite making waves in New Zealand, Ragnarok will be his biggest work to date – yet with his playful style and penchant for deadpan humour, he may well become a household name by the end of this year.

Waititi began his varied career with comedy while studying at university, becoming one half of the comedy duo Humourbeasts with fellow Kiwi comic Jemaine Clement. In 1999 they won the Billy T Award, the highest comedy accolade in New Zealand, and Waititi turned his considerable talents to directing. Eagle vs. Shark, an oddball rom-com, made little impact outside its US limited release in 2007, but 2010’s Boy marked a shift in fortunes for Waititi. Premiering at the Sundance Film Festival, the film broke several box office records in New Zealand, and Waititi received praise for his dual roles as director and one of the main characters (a hallmark of his work). What We Do in the Shadows was released in 2013 and has become a cult classic, starring Waititi and his longtime partner Jemaine Clement as part of a group of vampires living in modern-day Wellington. 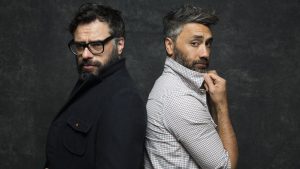 Apart from Ragnarok, Waititi’s most successful project to date is 2016’s Hunt for the Wilderpeople, a family friendly surprise box office hit that was included in the Top 100 Films of All Time on Rotten Tomatoes, with a score of 97% Fresh. This led to Waititi being commissioned to write the screenplay for Disney’s hugely popular Moana, but ultimately his involvement ended at the first draft – in part due to boredom. None of the films mentioned above appear to have anything in common at first glance, but Waititi’s sly humour and sense of fun unite all of them in what could be dubbed the ‘Taikaverse’. In a recent Guardian interview the man himself describes all his films as “a fine balance between comedy and drama”, which leaves a lot of questions regarding the direction he’s taking Ragnarok. The Marvel universe has a dedicated and often opinionated fan-base, so Waititi’s unique take on iconic characters like Thor and the Hulk will be extremely interesting.

Despite being named New Zealander of the Year this year, Waititi remains grounded and appears to have an outsider mentality towards Hollywood drama, professing that he’d be perfectly happy in New Zealand for the rest of his filmmaking career. All of Waititi’s films include actors and crew members of Maori and indigenous heritage, as he is of Maori heritage himself: he is keen to “get Maori stories out there”, resulting in a unique and special integrity that comes through in his writing and directing projects. Whether he’s writing a big-budget movie or an indie flick, it’s certain that Taika Waititi is one to watch in the future as he bridges the gap between the worlds of Hollywood and independent cinema.

Taika Waititi is officially New Zealand’s most successful director, having topped the Kiwi box office more times than Peter Jackson, the director of The Lord of the Rings and King Kong.