It would be fair to say that some of the best films of the past five years have come courtesy of director Denis Villeneuve. The French-Canadian has made significant strides in his career of late and is now about to release his biggest project so far with Blade Runner 2049. In anticipation of this huge film hitting cinemas, The Edge looks back at the director’s films so far…

Having been involved in a couple of shorter projects, Villeneuve directed his first feature, August 32nd on Earth (original title Un 32 août sur terre) in 1998 before moving onto the more popular Maelström in 2000. The latter picked up several awards in Canada but despite the success, Villeneuve did not make another film until 2009 with Polytechnique. The film, whilst deemed controversial, was met with critical acclaim and set the aspiring director up nicely for his next movie, Incendies, which drew some real attention. Heavily influenced by the Lebanese Civil War, the film follows twins as they travel from Canada to the middle east in search of their mother’s hidden past. Oscar-nominated for Best Foreign Film, Incendies marked a step up for Villeneuve and he was hailed as one of the most exciting upcoming directors. 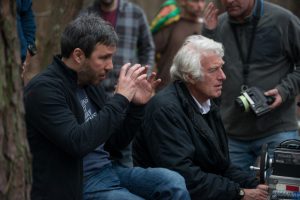 However, whilst Incendies gave Villeneuve credit amongst filmmakers, it was 2013’s Prisoners that brought the director into the public eye. The captivating thriller, starring Jake Gyllenhaal and Hugh Jackman in Oscar-worthy performances, follows the lives of a desperate father and a detective as they search for two missing girls. You’d be forgiven for thinking Prisoners is much shorter than it actually is, as the two-and-a-half-hour runtime flies past thanks to an enthralling story that truly sucks you in. The film is beautiful to look at with the rainy, suburban woodland setting of Pennsylvania being shot wonderfully by Villeneuve and legendary cinematographer Roger Deakins, the first collaboration of the two. Accompanied by a haunting score from Icelandic composer Jóhann Jóhannsson, the film is a devastating watch as it successfully portrays the horror, heartbreak and anger that comes with losing a child.

Made at around the same time of Prisoners but released the year after, Enemy is by far Villeneuve’s most cryptic film to date, but potentially also his best. Starring Jake Gyllenhaal, who once again is excellent, the film follows his character of Adam, a university lecturer who stumbles across his identical double whilst watching a movie. The film is delightfully unique in both its plot and themes, with an alluring story that, according to Villeneuve, delves into the human subconscious. A thick, uncomfortable atmosphere is present throughout the entirety of the film, brought upon in part by the hazy yellow colouring and disturbing spider imagery. Villeneuve’s attention to detail can be seen on repeat viewings where it becomes clear just how meticulously crafted each scene is through small features. The film is a thought-provoking masterpiece in its own right and some of the director’s finest work. 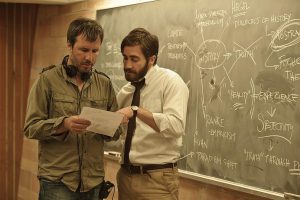 Villeneuve on set with Jake Gyllenhaal filming Enemy (A24).

In 2015 Villeneuve returned to a more conventional film structure with Sicario, which follows the fight against the ruthless Mexican drug cartels. The film is a masterclass in tension with Villeneuve doing an incredible job of drawing it out for as long as possible before having it explode in short bursts, particularly during the standout Juarez sequence. Emily Blunt’s character of Kate acts as the audience’s main point of contact, and, as she falls helplessly further into this dark world, so too do we. Benicio Del Toro is fantastic as cold-blooded hitman Alejandro whilst Jóhannsson and Deakins are at the top of their game again with the film being accompanied by a pulsating score and some beautifully desolate shots of the Texan border. The film show’s Villeneuve’s skill at controlling what information is fed to the audience. Seeing the film through the perspective of Kate leaves us just as in the dark as she is about what’s really happening, whilst her feelings of anxiousness and uncertainty are inflicted upon the audience.

The same can be said of last year’s unorthodox sci-fi Arrival. Villeneuve’s first dip into the genre is an adaptation of Ted Chiang’s book The Story of your Life and stars Amy Adams and Jeremy Renner. The film follows Adam’s character of Louise Banks who is tasked with finding a way to communicate with aliens who have landed several ships on earth. The film is far more character driven than many people would expect, and it turned out to be one of the most compelling movies of last year. What makes this film so impressive is that the story it’s trying to tell is far more complex to put on screen than it is on paper. Villeneuve however, in working with screenwriter Eric Heisserer, was able to direct it in such a way that key plot points aren’t revealed too early and, when we do get to the conclusion, everything is shown in a way that makes perfect sense. 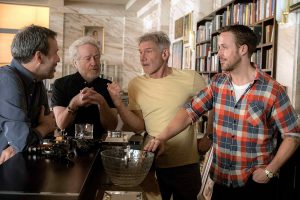 This year, Villeneuve will have taken all his filmmaking knowledge and experience into what is by far his most high-profile project to date, Blade Runner 2049. The director has already acknowledged the massive pressure that comes with taking on the sequel to Ridley Scott’s ground-breaking original and has expressed his confidence in the direction they have taken the story. Star Ryan Gosling, who will play Officer K in the upcoming film, has spoken about the sheer scale of the project, particularly with regards to the “incredible” sets. With Roger Deakins teaming up with Villeneuve for the fourth time, the film promises to be a visual marvel and if first impressions from critics are to be believed, we are in for something really special.

As for the future, the director has been in talks for some time to take on another sci-fi giant in remaking 1984’s Dune, something that would be a passion project for himself. Regardless of what Denis Villeneuve takes on next though, everyone will be hoping that this golden streak of filmmaking he’s on can continue.