“Film to me is a magical medium that makes you dream…allows you to dream in the dark.” -David Lynch

‘Lynchian’ is perhaps the only word perfectly suitable for describing the work of David Lynch; a master of the surreal and pioneer of cinematic obscurity whose true independence of voice is only emphasised by its inability to be categorised using anything but his name. Frequently providing what can be considered no less than psychological assault through visual medium, Lynch is a provocateur and an enigma cased in human skin. A man who lives his own life so deeply within the subconscious that he has the purity of vision capable of inviting us inside. Lynch’s world is a labyrinth of fear, obscenity and left-field beauty which lives in harmony with its oddity in a way that is both alien and hauntingly familiar. His latest fever dream, Twin Peaks: The Return currently airing on Showtime, might be his most uncompromising vision yet; an 18 hour series of complete Lynchian force. The series embodies everything the term refers to and, since his reluctance to return to cinema, may provide the ideal end-note to his truly individual relationship with film.

Lynch started out by making the transition from painting into the production of short films with his first known work, 1966’s Six Men Getting Sick. A short animated loop depicting men vomiting, Six Men Getting Sick reflects the early development of Lynch’s aesthetic which would later morph into his first live action feature, Eraserhead (1977). Remaining a cult classic 40 years from its release, Eraserhead is Lynch at his most raw. Yet to be compromised by external pressures and made alongside AFI with independent funding, Lynch’s debut film is ironically one of his most conventionally structured but also one of his most darkly nightmarish. Eraserhead’s eventual appreciation resulted in Lynch being offered to helm Joseph Merrick biopic The Elephant Man; a critical and commercial success which gained Lynch Oscar nominations for Best Adapted Screenplay and Best Director which lead to mainstream notoriety. 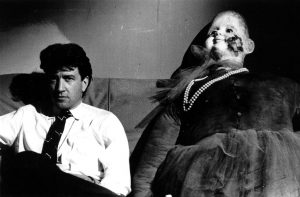 David Lynch behind the scenes of Blue Velvet – Image via The Film Stage.

After the poorly received adaptation of Dune, David Lynch’s Blue Velvet marked a new era of his cinematic work. It’s surrealist dissection of the hidden darkness in suburban idealism presented a bending mirror of the American dream, distorting its reflection to reveal its sickening nightmare. Similar ideas are filtered through the guise of Hollywood in his critical opus Mulholland Drive and they pollute the nauseatingly picturesque town of Twin Peaks.  His frames ache with what sometimes feels like underlying criticism of blind perfection, but Lynch always seems to admire the ignorant bliss of the ideal American life. It is true, however, that the quest for meaning in his work would be to commit blasphemy in his presence – “It’s better not to know so much about what things mean or how they might be interpreted…Psychology destroys the mystery.”

This mindless entry into the universe of Lynch requires something transcendental that no other living filmmaker will ask of you. His work is an experience which separates the eye from the brain and flips the switch on consciousness. Part 8 of Twin Peaks: The Return or the entirety of Inland Empire gives all of the evidence needed to support such a bold claim. Countless images of inexplicable impact fill every film, from a family of rabbits living out human lives with the accompaniment of a mistimed sit-com laughter track to a character changing identity without reason. What Lynch does with his visuals is successfully penetrate your dreams, a true horror filmmaker in his unparalleled ability to chill you on a level you previously thought wasn’t there at all.

As a director, Lynch is infatuated with the cinematic dream, the film world being a deviation from our own. Through his askew perversion on the world, David Lynch has unearthed a dark magic in the medium and made us dream. His desire for creating an “infinite experience” with his films is not merely a passing ideal, but more a mission statement and one met with great success. A film by Lynch is somehow not really a film at all but something more, something incredibly personal on a subconscious level, something which allows us to dream in the dark alongside him.

George Lucas offered David Lynch the chance to direct Star Wars: Episode VI – Return of the Jedi but he turned it down.