Throughout the 80s and 90s, Winona Ryder was the ultimate figure of youth. With her fresh, porcelain face and dark protruding features, she captured and exemplified the essence of what it meant to be a teen – young and conflicted – time and time again. In a number of her most acclaimed films, she perfectly narrated the thoughts and feelings of that universal age in which passion and anguish collide together to inspire a myriad of problems.

Evoking both vulnerability and volatile strength, Ryder has a way of bringing each female character she plays to life with real verve and tangibility. Following her recent performance in last year’s Netflix hit, Stranger Things, we take an in-depth look at her career and the shining performances that have cemented her as one of the most watchable actresses of her generation.

Ryder’s acting career began in 1986 when director David Seltzer cast her in his coming of age film, Lucas. Her performance in that film attracted the attention of Tim Burton, who later cast her in Beetlejuice in 1988. This dark wacky comedy marked Ryder’s mainstream breakthrough as critics and audiences alike praised her performance as Lydia Deetz – a melancholy goth teenager whose family is haunted by the former residents of their new home. 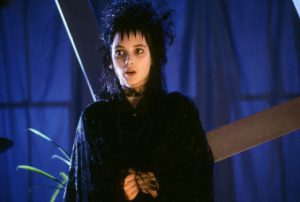 In 1989, Ryder starred in the black comedy, Heathers. Starring opposite Christian Slater, Ryder played the role of Veronica Sawyer – a popular high school student who becomes disillusioned with her clique of friends and finds herself embroiled in the murderous solutions of her dangerous new boyfriend. Though the film was a box office flop, it garnered a mammoth cult following and lead The Washington Post to call Ryder “Hollywood’s most impressive ingénue.”

As her rising star continued to soar, Ryder worked with Burton once again on his 1990 fantasy, Edward Scissorhands. Aged 18, Ryder starred as the romantic interest alongside her then-boyfriend Johnny Depp, who played the eponymous outcast. In the same year, Ryder also appeared in the comedy-drama Mermaids, in which she played the role of Cher’s repressed daughter. For this performance, she received her first Golden Globe nomination.

In the early 1990s, Ryder started to move away from the alienated teenager roles that had catapulted her into stardom; electing instead to take on more traditional, period roles. In 1991, Ryder appeared in Francis Ford Coppola’s gothic romance Dracula, as Mina Harker/Elisabeta. Ryder brought the script to Coppola’s attention as a peace offering following her late withdrawal from the role of Mary Corleone in The Godfather: Part III.

In 1993, Ryder played May Welland in Martin Scorsese’s adaptation of The Age of Innocence, winning her the Golden Globe for Best Supporting Actress. Ryder followed this with a role in Gillian Armstrong’s Little Women, in which she played Josephine “Jo” March. For this confident, sparky performance, Ryder earned her second Academy Award nomination. In 1997, Ryder starred alongside Sigourney Weaver in Alien: Resurrection as the synthetic android, Call.

In 1999, Ryder executive produced and starred in one of her best films, Girl, Interrupted. Based on the autobiography of Susanna Kaysen, the film follows the story of a young writer with borderline personality disorder who is admitted to an all-female psychiatric hospital. Deeply attached to the film, Ryder offered a powerful and frenetic performance as Kaysen. In 2000, Ryder received her own star on the Hollywood Walk of Fame.

After a five year hiatus following her infamous shoplifting incident, Ryder returned to acting in 2006 with a supporting role in Richard Linklater’s rotoscope sci-fi thriller, A Scanner Darkly. In recent years,  Ryder has had small parts in films such as Star Trek (2009), Black Swan (2010),  The Dilemma (2011) and Frankenweenie (2012).

Most recently, she appeared in The Duffer Brothers’ hugely successful Netflix series, Stranger Things as Joyce Byers; receiving a Golden Globe nomination for her performance.

The Film to Watch: Girl, Interrupted.