Martin Scorsese’s 2011 effort Hugo was one of the most divisive films of its time. Scoring well under a critical scope, collecting a whopping eleven Academy Award nominations and going home with five wins (Best cinematography, best art direction, best sound direction, best sound editing, and best visual effects), the film still wasn’t enough for commercial audiences, some who found it tedious, pretentious and overly convoluted. The blue-tinted palate it showers itself in, the forthright references to the early silent cinema era, all of it a little too banal for a generation fed on both fast quips and sly allusions. But now, just over five years later, The Edge takes a look back at Scorsese’s 22nd feature length directorial effort, in the hope of regaining some of that appreciation and resituating it in the realm of Scorsese’s best efforts. 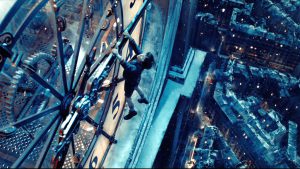 One of the most thematic films of recent cinematic ventures, Hugo follows its eponymous lead character (a young Asa Butterfield) through the streets of snowy Paris and the tunnels of the Gare Montparnasse train station, where he lives alone. Kept company by a faulty automaton, Hugo spends his time working the station clocks and attempting to repair the man-shaped contraption using stolen parts from the station toy store, owned by Ben Kingsley’s Georges. After being caught stealing, Hugo enlists the help of Georges’ goddaughter Isabelle (Chloe Grace Moretz) to retrieve the notebook Georges took from him, a budding friendship which inadvertently sets him on the path of a creation and discovery that time had seemingly forgotten.

Set for the most part in the Gare Montparnasse station, Scorsese manages to find inextricable openness in closed claustrophobia. His expert manipulation of spacial awareness sets the film up to be one of the few recent cinematic endeavours which effectively but subtly uses space to reflect its protagonist’s emotional state. As Hugo tearfully admits the depth of his loneliness to antagonistic station inspector Gustave (Sacha Baron Cohen) resolved on sending him to ‘the orphanage,’ the camera focuses closely on his face and eliminates the confined station before intercutting it with a close-up of Gustave’s, now empathetic. Just minutes later (though mentioning what happens in those few minutes would edge on spoiling the film’s central arc) Hugo sits in a grand theatre, surrounded by his new family and friends. His station days are over, as are his desolate. 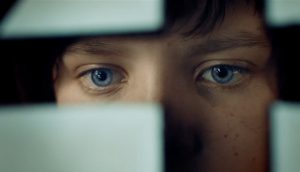 If Hitchcock’s Rear Window is one of the most famed films to deal with voyeurism and spectatorship in cinematic history, and Sam Mendes’ American Beauty one of the most astute, Hugo cements its rightful place as one of the subtlest yet effective. Juxtaposing repetitive close-ups of eyes, and shot/reverse-shots of the repetitive on-goings of station life, with the surreal, picturesque skyline of Paris and the inner mechanisms of individual life tightens up the film’s thematic content with its narrative content. If spectatorship was the foundation of cinema’s invention and first wave of maintenance, then Hugo is the very symbol for the preservation and upkeep of cinema all the way through the 20th century and into today. He looks at films like he looks at everyday life: with the same surreal and fantastic appreciation. And once he starts inadvertently re-enacting the very scenes he’s spent so long looking at from afar, his transition and purpose is complete. Without a doubt Hugo is one of the most thematically effective films to grace the big screen in recent years.

It’s relatively easy to label Hugo as something bordering on, even revelling in, gaudy; the incessant brandishing cinematography, like an attention-seeking child hell-bent on appreciation, the self-reflexivity (‘but happy endings only happen in the movies!’ Hugo deplores ten minutes before the film’s inevitable happy ending), and the undeniable Oscar-bait air about it (films centering on a narrative within Hollywood tend to do well in award season – Birdman, The Artist, Argo). No doubt Hugo has a sense of arrogance about it. But, much like the film’s central reservoir of wit, Cohen’s Gustave, there is more than one side to this coin. Its arrogance may be overt, but it’s far from unwarranted, and at Hugo’s heart, one of the quaintest, most commendably likeable films has made itself known. A love letter to the art of filmmaking if there ever was one.

Hugo (2011), directed by Martin Scorsese, is distributed in the UK by Entertainment Film Distributors. Certificate U.