Benedict Timothy Carlton Cumberbatch, is known to some as Bendersnatch Cumberbund, known to many as Sherlock Holmes, and known to all as one of the best British actors of our time. He’s dabbled in television, theatre and radio, but in recent years he has become one of the biggest A List stars in demand for the razzle dazzle world of film and cinema, starring in over 20 films in the past six years alone. This November will see the return of Cumberbatch to the big screen in the highly anticipated 14th instalment of the Marvel Cinematic Universe, Doctor Strange, as the film’s eponymous character. 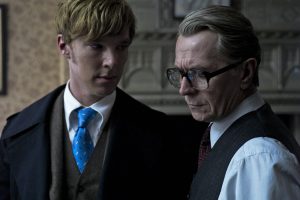 Whilst Cumberbatch made his cinematic debut in the 2003 To Kill A King, his first major movie role came in 2006 with Amazing Grace’s William Pitt the Younger which garnered him a nomination for the London Film Critics Circle ‘British Breakthrough Acting Award’. After using this newfound momentum to aid supporting roles in Atonement (2007), The Other Boleyn Girl (2008), Creation (2009) and The Whistleblower (2010), he appeared opposite acting legends Gary Oldman and John Hurt in Tomas Alfredson’s critically acclaimed adaptation of Tinker Tailor Solider Spy, where he played the role of Peter Guillam, the right hand man of George Smiley (Oldman). 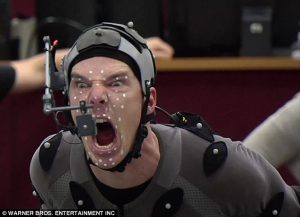 Cumberbatch and the motion capture tech for The Hobbit. Scary stuff. Image via dailymail.co.uk

After landing the role of Sherlock Holmes in the acclaimed BBC programme, Cumberbatch furthered his mainstream attraction with his role as Smaug the Dragon and the Necromancer in The Hobbit film trilogy from 2012 to 2014 where he provided the voice and motion-capture for both characters. Speaking of the motion-capture technology, for which he used a suit and facial markers to highlight the dragon’s expressions and actions, Cumberbatch said “you just have to lose your shit on a carpeted floor, in a place that looks a little bit like a mundane government building” – acting at its finest, ladies and gents. 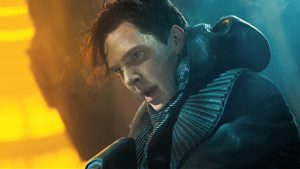 Khan and his wrath in Star Trek Into Darkness. Image via google.com

2013 saw Cumberbatch catapulted into the sci-fi realm with J.J. Abrams’ Star Trek Into Darkness where he played Khan, the film’s dark and sociopathic antagonist, for which he was praised as one of the only redeeming elements of the film. Seemingly an unstoppable force at this point, 2013 also saw him star in major films such as The Fifth Estate and 12 Years a Slave, both which garnered critical and audience acclaim.

After subsequently fulfilling roles in Penguins of Madagascar and August: Osage County, the latter for which he sang ‘Can’t Keep It Inside’ for, Cumberbatch played Alan Turing in The Imitation Game, an adaptation of the true story of Turing who decrypted German intelligence codes for the British government during World War 2, but faced discrimination as a result of his homosexuality. Cumberbatch was met with universal, widespread praise for his performance, with TIME ranking it at number one in its Top 10 Film Performances of 2014, calling it “the actor’s oddest, fullest, most Cumberbatchian character yet,” earning him a nomination for the Academy Award for Best Actor among others, and solidifying him as one of the best working actors today.

In 2014, Cumberbatch was announced to be a part of Warner Bros. Pictures’ upcoming film adaptation of the Jungle Book as Shere Khan, and also as Doctor Strange, the latter which is set for release in November this year. Looks like good ol’ Bendersnatch Cumberbund isn’t going anywhere anytime soon. Marvel’s got us hooked now.

Films to check out: