As our recent review attests, Suicide Squad is something of a frustrating movie. Neither perfect nor god-awful, it has sat uneasily on a lot of viewers, who struggle to weigh up exactly what it is they liked and what they didn’t – and what they really felt about it overall. I am one such viewer. Though there were elements I enjoyed, I can’t seem to shrug off the things that left me feeling uncomfortable or underwhelmed. The film has vexed me to such an extent that it has compelled me into scrutinising the downfalls that most affected my viewing experience. Spoilers ahead.

Firstly, Suicide Squad is DC’s desperate attempt to show that it can do ensemble movies like Marvel; and it really shows. You’d think that with a concept like this, originality would be at the forefront of their aim. Marvel are great at superheroes, but this idea was unique; Marvel’s villains are nowhere near the same cultural calibre as DC’s. Since Loki is the only Marvel villain that has really made an impact, I can’t imagine there ever being a Marvel villain-fest such as this. Suicide Squad was Warner Bros’ opportunity to really stand out and make the ensemble comic-book film their own – but instead, to somewhat pitiful dismay, they elected to tread as closely to Marvel’s ensemble style as possible; from the action-packed climactic coup, which saw mystical minions and a big-ass light show eerily similar to that wormhole in The Avengers, to using a soundtrack of peppy, nostalgic tunes – including one that actually featured on the Guardians of the Galaxy soundtrack (‘Spirit in the Sky’ wasn’t technically used in the film, but still, it seems a bit sussed that it’s included here.) Diablo’s souped-up, mega-angry form even struck me as looking a little like Groot (mixed with Exeggutor and fire).

The post-credits scene, in which Bruce Wayne and Amanda Waller discuss the Justice League, also blatantly mirrors the conversation between Tony Stark and Nick Fury at the end of Iron Man. Only, Ben Affleck is no Robert Downey Jr., so it’s all a bit more underwhelming. You could argue that there isn’t that much room for true originality in the comic-book movie fuelled climate we’re currently saturated in, but even then, what makes Suicide Squad disappointing in this regard, is the fact that it got way too close for comfort. 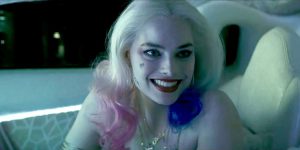 Suicide Squad‘s overtly perverse attitude towards women is also pretty uncomfortable to sit through. Were the main female characters at hand here ever going to be true feminist role models? Probably not. They’re the bad guys after all. But the way in which certain male characters – most predominantly Batman, who actually is supposed to be a good guy – treat the female characters is pretty concerning. In a flashback detailing the arrest of Harley Quinn, we see Batman rescue her from the car that the Joker ran into a river. Having rescued her, he then proceeds to give her CPR in the weirdest way. Part creepy kiss, part stranglehold, it’s all a very weird experience to watch; and an experience that was definitely not necessary either.

These problems came as something of a grim surprise upon watching though. If there was one element of the film that was always going to receive the harshest scepticism from the very offset, it was Jared Leto’s depiction of The Joker. Heath Ledger’s previous portrayal in The Dark Knight has been burned into our brains to such an extent that it makes it so much harder to swallow Leto’s more hyperbolic, gangsta interpretation of the character. Ledger brought a philosophical kind of nuance to his portrayal of the world-weary psychopath; here, in what is perhaps an overt desire to move as far away from Ledger’s performance as possible, Leto’s Joker feels a little over-acted. The Joker is supposed to be exuberant and psychotic, sure, but Leto’s appearance – from the tattoos and the rings and the golden teeth – detract from that enormously. This being said, I did slightly miss the Joker when he wasn’t on screen (and he really isn’t on screen for long at all), mainly because the relationship between him and Harley Quinn was one that worked fairly well in the name of fan service. Personally, I would have liked to see a bit more of Harley Quinn and her “Puddin’.”

Harley Quinn is, without doubt, one of the best elements of the film; Margot Robbie’s portrayal is sparky, charismatic and instantly likeable. But sadly, as the poster girl for the film’s marketing campaign, Warner Bros have done their leading lady something of a disservice – by revealing all of her best lines in the trailers. Unlike Captain Boomerang, Killer Croc and Will Smith’s Deadshot (who each have some great comic one-liners), a lot of Harley Quinn’s quips fall a bit flatter, because even though Robbie executes the role perfectly, we’ve just heard them all too many times in the promos, trailers and TV spots. Knowing that everyone would love her, the studios were just a little too robust in their pre-release exhibition of her.

It’s hard to find a discernible villain among a film full of bad guys, but even then, Cara Delevingne’s Enchantress proved underwhelming and at times, laughable. (*Very deep, supposedly menacing voice*: “You haven’t got the balls.”) The relationship between Enchantress’ human alter-ego, June, and the Squad’s ringleader, Rick Flag (Joel Kinnaman) was also pretty bland. Tom Hardy was originally intended to play Flag, but after seeing what little he would have had to work with, I’m kind of glad that he escaped this one.

Suicide Squad is a troubling watch – mostly because it had so much potential. Ever since the concept was first confirmed for the screen, audiences have been rooting for it – myself, included. But because of the aforementioned elements, it’s left a lot of people stumped. If it had been a proper marmite film, where you could wholly love it or wholly hate it, it might have been easier to digest. But sadly, this is a film that leaves you somewhere in the middle.