Despite the beauty of its cinematography and perfectly eerie setting, Shepherd can't find anything to boost it past the line of mediocracy.

If borrowing is a form of flattery, then Shepherd certainly sets out to flatter its inspirations. However, spending too little time crafting its own tale to add anything meaningful to the genre heavily bogs it down in the process. What tries to be beautifully haunting and filled with a gripping narrative only seems to flounder in the process, creating visual spectacle rather than effective horror. While it attempts to craft poignancy with grief and guilt, in the end, it only ends up as a pale and sometimes baffling foray into ambiguity.

Shepherd tells a rather reoccurring tale in horror of a man seeking isolation after a tragedy. Eric Black (Tom Hughes) seeks to escape to the West Coast of Ireland after the death of his wife (Gaia Weiss). Enwrapped with grief, and secluded with no companions other than his dog, Black soon becomes haunted by visions, dreams, and omens. As his time alone grows, and a question of his sanity meets vengeful supernatural forces, a mysterious woman named Fisher (Kate Dickie) perpetuates a descent into the unknown as questions of liability arise. 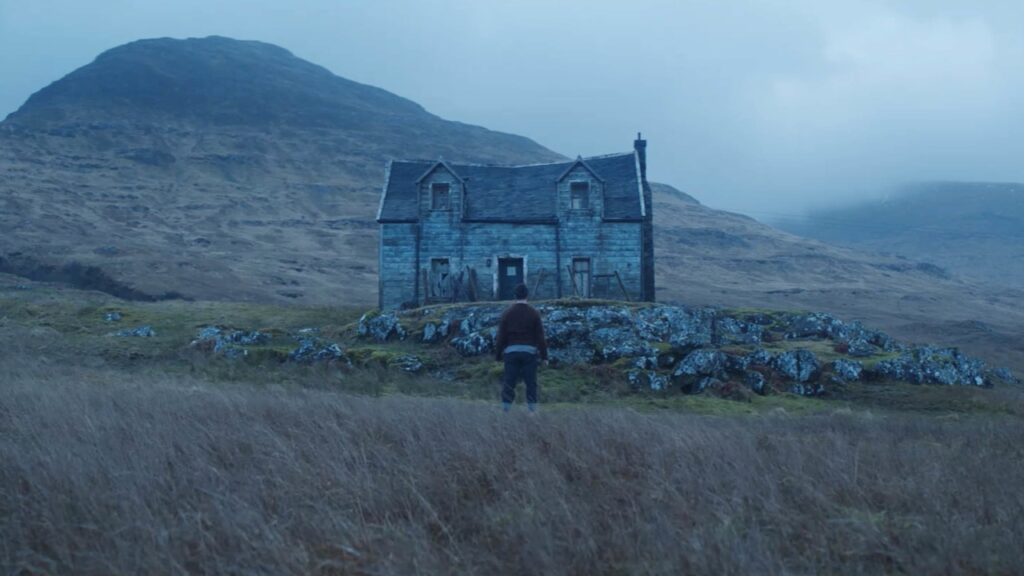 It’s a vague plot that matches the vagueness of its execution. What director Russel Owen attempts is a form of visual storytelling that relies very little on dialogue (the film mostly centred on Black while isolated), sadly the execution just isn’t there though. While many of the sweeping wide-angle shots are often beautiful and stirring, they also lack the necessary composition to make them a compelling addition to the drive of the story. Over-reliance on dream sequences, seamless wondering, and ambiguity all lend to a story that sometimes feels incomprehensible or at least lacking in the necessary direction to feel cohesive. What attempts to be an effective chart into the pains of guilt and, by extension, grief, instead becomes lost in the film’s reluctance to reveal too much to the audience. Instead, everything ends up feeling like vignettes of a larger story that are strung together without much explanation or impact. What happens then is the film lacks any sense of impact at all, except for creating a moody dread that successfully haunts some of its moments.

However, while its attempts to juggle a weighty story ends up feeling rather messy, this theme of sanity and madness comes together quite interestingly in Owen’s approach to filmmaking. We have moments that blur distinctions between diegetic and non-diegetic sounds as the liminality of Black’s mind skirt the fine line between two very fragile mental states. The droll ring of the lighthouse that permeates many of the scenes both feels part of Shepherd’s world and not, while the eerie whispers of voices or the creaking floorboards underscoring scratchy violins all lend to a delightfully eerie tone. Even the visual display of acrophobia (fear of heights) as a sense of vertigo (no doubt inspired by Hitchcock’s own technique in 1958’s Vertigo), helps tinge the film with an unmistakable visual identity that sadly lacks purpose because of its narrative. It just doesn’t translate: visual identity can’t carry the failings of the plot and the ambiguity that horror often celebrates can’t justify a constant lack of clarity.

It doesn’t help that I feel Tom Hughes was slightly miscast or Owen’s direction of the character is faulty. Black is often quite an emotionless, sometimes irritable, muted man, but Hughes performance never carried this quite right for me. While an argument can be put forward about the numbness that grief instils in people, Hughes performance often couldn’t escape a feeling of oddness when he showed anything other than his muted side. His tears felt shallow, his anger dull, and his fear forced, that it never felt like an effective display of grief, but merely a pale imitation. In fact, the best performance comes from Kate Dicker, the eerie interludes of her voice over the phone, or her unsettling presence in scenes with her one milky eye all lend to a character I wish I saw more of, especially as the film constantly fails to confirm Fisher’s importance. As one of the main perpetrators of the films horror plot, again the film’s over-reliance on ambiguity leaves her character feeling hollow even as Dicker gives a thoroughly chilling performance.

As Shepherd drew to close, I couldn’t help feeling baffled at what it attempted to achieve. Failing as a compelling narrative on grief, and only managing the execution of an eerie tone and setting, it was a film that liked to hold its cards close to its chest. As a result, it never really goes anywhere or achieves anything, lending itself to a rather disappointing and forgetful watch.

Shepherd releases in the U.K. on November 26th. Watch the trailer below: