The Australian Outback: an unforgiving, empty, uninhabitable frying pan of death. If the frontier life of North America looks arduous, the Australian equivalent is Hell. The extreme heat, complete lack of shade, swathes of persistent midges and potentially lethal wildlife all create a hostile environment that has barely been cinematically exploited. 2016’s Goldstone is an Australian neo-western that sets the record straight with its brutal, solemn detective tale set in the red wastelands of inland Oz.

Aaron Pederson plays Jay Swan, an Indigenous detective investigating the disappearance of a missing Asian girl. Pederson previously played Swan in the spiritual predecessor Mystery Road (2013) but the two films are largely individual against each other in the vein of the early Bond films. Opening with the troubled detective being pulled over (for driving under the influence) by Alex Russell’s young cop Josh Waters, the story subsequently plays out like an extended game of chess – small power-plays that gradually push the stronger pieces of both sides into a bruising conflict.

Treated with hostility for being an outsider, a federal agent and an Indigenous Australian, Swan is quickly ostracised, unless he wins over Waters’ relatively uncorrupted soul (an Aussie Jim Gordon, if you will). Their frenemy dynamic compliments the murky atmosphere as the political corruption of a small Outback town is unearthed, whilst also offering a neat spin on the detective and detective’s assistant trope.

The neo-western is a fascinating sub-genre. With a classical Western generally being set between 1865-1900, the neo branch depicts frontier life over a hundred years later in the world of today. The lawless American Old West and the untamed Outback more than correspond with their grim treatment of the native peoples, visual similarities and their struggle to modernise. What the neo-western genre does is act as an update to see how different things are compared to a century ago and what changes there have been, if there are any. More popular examples include Sicario and Wind River, which detailed the flourishing crime levels on the Mexican border and the racial prejudice on Native American reservations respectively. Goldstone’s own emphasis on modern day Aboriginal prejudice, rural lawlessness and corporate malpractice isn’t too different from the themes of earlier bushranger Westerns like The Proposition, which is set in 19th century Outback country. A complex narrative niche, the neo-western fuses pictorial style with a dispiriting message of how slow progress moves in the forgotten parts of the modern world.

Of considerable note is Goldstone’s director Ivan Sen (who also helmed Swan’s first outing Mystery Road, also worth watching). With a European father and an Aboriginal mother, Sen’s filmmaking taps into the colonial sweat of his country. Orson Welles is revered for his ability to direct, write, produce and star in his films, but even Welles would be impressed with Sen who, along with directing, wrote, scored, edited and did the cinematography for Goldstone. Even more impressive? Every one of those aspects is precise, assured and utterly inkeeping with the narrative’s tone. 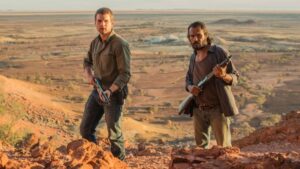 Sen makes particularly outstanding use of drone photography to truly cover the sheer gargantuan size of the Outback. The Martian-like landscape makes for a terrific battleground for Swan and Waters in the rousing finale, which packs a lean shootout that rivals those in Wind River and Heat. It is the work of a master craftsmen, a director who is without a doubt the most exciting filmmaker to emerge from Australia since Peter Weir and George Miller exploded into the mainstream in the 1970s.

By platforming the stories of the too often forgotten Aboriginal people, Ivan Sen’s films are a wake-up call for other countries to make similar amends to whose stories they tell. Goldstone is a work of true auteurship.

Watch the trailer for Goldstone below: