Set in the swampy outer banks of North Carolina, The Peanut Butter Falcon is an endearing film that follows a Huckleberry Finn inspired story of friendship, liberation and redemption. The film sees Zak (Zack Gottsagen), a 22-year-old with Down’s syndrome, who runs away from his assisted living facility to follow his dream of becoming a wrestler by going to the wrestling school of his idol. Along the way he comes across Tyler (Shia LaBeouf), who is a crab fisherman haunted by familial loss that is also on the run for burning his fishing competitor’s equipment and causing a dock fire. They form an unlikely bond on their odyssey as they are followed by Zak’s carer Elanor (Dakota Johnson) and Tyler’s vengeful competitors.

On the surface one might think that the film is packed with clichés and classic movies tropes that creates a run of the mill ‘outlaws on the lam’ film. However, it is anything but this! The familiar concept of ‘mismatched buddies on the run’ is taken on in a fresh way that sheds light on important issues, bringing much deeper undertones for the viewers to enjoy. This is one of the factors that make this film a hidden gem! The juxtaposition between Tyler and Eleanor’s treatment of Zak brings in to question the lack of support for disabled people in America and the best ways to treat them. Tyler treats Zak in the same way he is seen to treat people in the beginning of the film, with harsh and to the point remarks that let Zak experience life for what it is. On the other hand Eleanor, despite having her intentions in the right place as she is caring for Zak who is housed by the state in a retirement home, tries to shield him and protect him from everything which in turns stops his experiences of life and isolates him as ‘different’. This theme comes to a head when all three of them are travelling on the raft Zak and Tyler built. Tyler tells Eleanor to stop treating him like a child and she rebuts this while Zak practices holding his breath off the back of the raft. As the argument apex’s, he erupts from the water having caught a fish for lunch which powerfully displays without words that whilst people with disabilities are different, they are capable and unique in their abilities.

Another significant theme that is masterfully portrayed throughout the film is that of liberation and redemption. All three characters have something holding them back. Zak has the fact the state is not funding his proper housing or care and wants to escape, Tyler deals with the death of his brother from a car crash in which he was driving, and Eleanor is a widow despite being very young. The characters help each other through their demons, yet it is done in a predominantly visual manner that serves to make it come across as a more authentic and natural process. As the relationship between Zak and Tyler develops, the progression between Tyler helping Zak with his problems and then vice-versa is shown by who is leading the other whilst they travel on foot. In what is probably one of the most beautiful film scenes of recent times, Zak and Tyler come across a blind man who baptises them and allows them to build a raft to travel on down the river. The symbolism of a blind man, who can only judge the pair based on the personality presented to him at that point and who would not be immediatley aware of Zak’s disorder, washing away their sins and demons is both poignant and moving. This scene sits around the halfway mark of the film and represents the pair’s liberation. The section finishes with the pair drifting quietly down the river on their raft sitting side-by-side and thus for the first time traveling synchronously. Zak turns to Tyler and tells him he will give Tyler all of his birthday wishes, at which point Tyler silently breaks down, and it is here that the death of Tyler’s brother is made evident to the viewer. The beginning of the pair’s redemptive undertakings, which dominates the second half of the film, comes with a heart-wrenching exchange of dialogue in which Zak states “I can’t be a hero because I am a Down’s syndrome person,”. Rather than becoming an over-familiar teaching moment, Tyler, who is by no means a conventional “good guy”, simply disregards the suggestion with “What does that have to do with your heart?”. This sequence of scenes is genuinely beautiful. 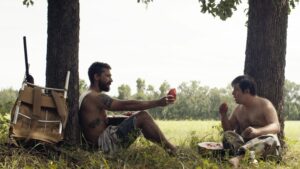 With a chemistry that is palpable, the casting of this film is simply brilliant, with acting that feels natural and genuine. Zack Gottsagen establishes himself as a rising star with a charisma and screen presence that instantly wins the viewer over. Additionally, Shia LaBeouf provides a brilliant performance that brings significant depth to his character, which is bolstered by the fact it has seemed to mark a redemption for him in his personal life. Additionally, the cinematography is captivating. With a multitude of beautiful shots, it allows the viewer to really feel the hot and humid setting of the film, which again only contributes to the experience of the film as a whole.

To do this film justice in so few words is an impossible challenge. With a finale that could have so easily failed to have paid off, the movie evokes feelings of contentment and wholesomeness that only an indie movie can really achieve. Through what seems to be overwhelming sadness at the beginning, the film somehow manages to create a light that shines so brightly by the end. It provides an honest and moving take on complex issues to create a simple but endearing parable. Likely to leave you tearing up with an ear-to-ear smile, The Peanut Butter Falcon is simply a must watch.

Watch the trailer for The Peanut Butter Falcon below: