Read more
You are at:Home»Film»Features»Actor in Focus: Saoirse Ronan
By Thea Hartman on December 21, 2019 Features, Film

While most people know her for her notoriously hard to pronounce name (the first three questions that come up on Google are all related to her name – which rhymes with ‘inertia’, by the way), her knack for accents, or from Ed Sheeran’s ‘Galway Girl’ music video (although I hope not), Saoirse Ronan is one of the most talented, prolific, and underrated actresses working in Hollywood today. Well, as underrated as someone with three Oscar nominations and a Golden Globe to their name can be. With Greta Gerwig‘s adaptation of the classic American novel Little Women coming out this Christmas, now is the perfect time to take a look back at the outstanding career of the 25-year-old (only 25!) Irish-American actress. 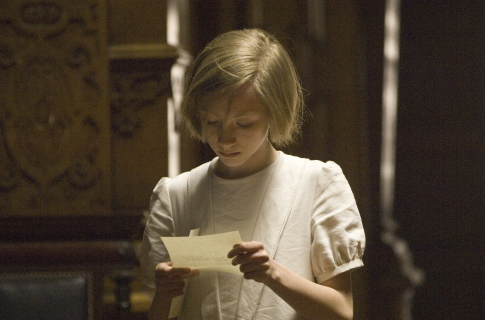 Ronan’s breakthrough happened with the thrilling adaptation of Ian McEwan’s Atonement, released in 2007 and also starring Keira Knightley and James McAvoy. As a 12-year-old, she played aspiring novelist Briony, a very creepy and precocious little sister lacking a sense of sympathy. Ronan’s bloodcurdling performance got her an Oscar nomination for Best Supporting Actress, making her the seventh youngest Oscar nominee in history for that category.

She soon proved that she was not a one-hit wonder, playing challenging characters as a teenager in quite a few moderately successful films. She received her second BAFTA nomination as a 14-year-old for Peter Jackson‘s The Lovely Bones (2009), and was next in the spotlight as teenage assassin in Hanna (2011) alongside Cate Blanchett and Eric Bana. Even when acting in critically unsuccessful films, Ronan still managed to come out clean. Her performance was praised in the otherwise universally panned adaptation of Stephanie Meyer’s The Host (2011) – a regretful watch even for those whose Twilight phase went beyond just Twilight.

A streak of under-the-radar films ended with the widely acclaimed dramedy The Grand Budapest Hotel in 2014, where she played the quirky Agatha, lead character Zero’s love interest. It became clear then that it was only a matter of time until the prodigal Irish teen was to shine again as a lead. And she did very soon after, playing homesick Irish girl Eilis – an immigrant in 1950s’ New York – in the acclaimed drama Brooklyn (2015). Her heartfelt performance as an outsider unable to find their place saw Ronan receive a second Oscar nomination.

However, the actress’ image as a true coming-of-age queen was invigorated by her next hit, Lady Bird, written and directed by Greta Gerwig and also featuring indie sweethearts Lucas Hedges and Timothée Chalamet. Her performance as the rebellious title character was expansive, powerful, and incredibly relatable, as she navigated her way through first love, an identity crisis, and a devastatingly real relationship with her mother. Such an astounding performance did not go unnoticed. Lady Bird scored five Oscar nominations, including one for Ronan – her third nomination by the age of 23…could that weird feeling I’m getting be… underachievement? For the role she won her first Golden Globe, for Best Performance by an Actress in a Musical or Comedy.

After a fierce performance in forgettable historical drama Mary Queen of Scots last year, Ronan has a few star-studded projects coming up, reteaming with Gerwig on Little Women, which boasts an exciting reunion with her Lady Bird co-star and fellow difficult-name-holder Chalamet. With an incredible cast, ridiculous media hype, teased by a tear-jerking trailer, Little Women might just be the alignment of the stars Ronan needs for that Oscar win, 12 years after her first nomination. Because it’s about damn time.

Little Women, directed by Greta Gerwig, will be released in the UK via Sony Pictures Entertainment on the 26th December. Watch the trailer below: