Going into the Oscars Ceremony this Sunday, everything is, remarkably, still to play for with only a few front-runners in sight. It’s partially to do with the mixed quality of the nominations this year (Bohemian Rhapsody and Roma in the same category?), and also the growing influence of online streaming services such as Netflix. In addition, there are some very surprising snubs that I find hard to believe. If Beale Street Could Talk is nominated for Adapted Screenplay and Music, but nothing for Best Picture, Best Director or even some of the acting nominations. Where is A Quiet Place, one of the year’s outstanding horror films, and what about Toni Collette who was one of the saving graces of Hereditary?

In regards to the ceremony, at the moment it’s probably Alfonso Cuaron’s Roma to lose for Best Picture (Best Director is a dead cert for Cuaron at this stage), and what a thoroughly deserved winner if the name is read out as his Black and White story based on childhood memories would be the first foreign-language film to win Best Picture as well as finally cementing Netflix as a major production house to rival the traditional Hollywood greats. Also, Glenn Close and Olivia Colman are in a two-horse race for Best Actress: as much as my head is saying Close, my heart is soaring for Colman and wouldn’t it be great if the actress who started out on cult hit Peep Show and stood toe-to-toe with David Tennant in Broadchurch, wins an Oscar for humiliating Emma Stone in The Favourite. 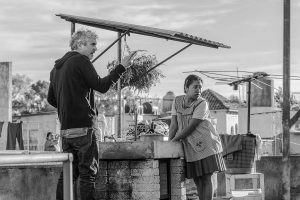 In other areas, although A Star Is Born looked to be deadlock for the big prize way back in October, it’s hopes now lie on Original Song (‘Shallow’) and Music (although dark horse Nicholas Britell for Beale Street is worth watching), whilst Black Panther looks set to cause a mighty upset in the Best Picture category, and The Favourite should sweep up a few of the technical categories.

Whatever the outcome is, it’s set to be an intriguing, and somewhat sleep inducing, four hours.

Maybe it’s my fault for living under a records-shaped rock for the past year, but I have seen ridiculously few of this year’s Oscar-nominated films ahead of the day itself. So these thoughts come mostly from angry people on Twitter who I happen to trust, angry people on Facebook sharing articles from sources I happen to trust, and Honest Trailers. With that said, if Green Book wins Best Picture, I will cry. I’ve not seen it, but I’ve heard it simplifies the issues of racism to a laughable degree, and that’s enough for me to get angry about its nomination in my book (no pun intended). 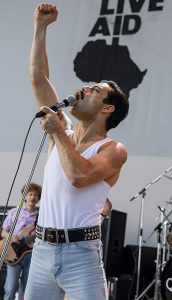 Rami Malek has swept Best Actor in the other major awards ceremonies, but will the controversial Bohemian Rhapsody take home any other awards?
(GK Films)

But onto the films I have seen. When I came out the theatre, I was buzzing about Bohemian Rhapsody: it’s impeccably choreographed to appeal to Queen fans as well as general moviegoers who won’t pick up on its formulaic tropes and awful editing, but on closer inspection (or upon watching a dozen video essays on the subject), those cracks begin to appear (to say nothing of its problematic stance on queer issues and the storm around Bryan Singer). Rami Malek deservedly seems a shoe-in for Best Lead Actor, but I’ve just heard too much negativity around it for Bohemian Rhapsody to walk away with anything more than that.

Elsewhere, Black Panther deserves credit for being the first superhero movie to earn a Best Picture nomination, but can I really see it winning anything? Despite its huge (and hugely positive) cultural impact, unfortunately not, even if I would love it to. Meanwhile, considering its snubs thusfar this award season, A Star Is Born seems like it’s run out of its November/December steam and I doubt it’ll pick up anything at all – aside from Best Original Song for ‘Shallow’ (ugh. And to be honest, if it did win anything else, I’d be seething – it features an incredibly problematic portrayal of suicide, but that’s for another article).

So that leaves Roma, out of the Best Picture nominees I’ve watched. This one is a completely different beast. Immaculately directed, beautifully written and shot, and emphatically brought to life by the performances of Yalitza Aparicio and Marina de Tavira, Roma thoroughly deserves all the praise its been getting. With the conversation still hanging around Netflix‘s controversial distribution methods (which I’m strongly in favour of – I highly doubt I would ever have watched Roma had it seen a conventional distribution pattern) as well as its aforementioned cinematic excellence, my bet would be on Alfonso Cuaron walking away with Best Director and his film claiming Best Motion Picture. Aparicio and De Tavira meanwhile thoroughly deserve Oscars for their performances, but De Tavira is yet to win anything so far this awards season and I’ve read online that Glenn Close is a shoe-in for Best Actress, so who knows.

As for the rest? This is already getting way too long, so let’s just rattle through them. Mahershala Ali will win his second Supporting Actor Oscar in three years for Green Book; Amy Adams will get snubbed for an Oscar yet again, losing out to Regina King’s performance in If Beale Street Could Talk; BlacKkKlansman will win Best Adapted Screenplay, with The Favourite taking the Best Original Screenplay Oscar; Spider-Man: Into The Spider-verse will win Best Animated Film; Best Original Score has to go to Black Panther or I will cry, whilst Sound Mixing will go to Bohemian Rhapsody and Sound Editing to First Man; Cinematography will go to Roma; Documentary will go to Free Solo; and Avengers: Infinity War should walk away with Best Visual Effects. To list the remaining Oscars would take too long, so I’ll put them in the ad break.

A Star is Born was an early favourite and received 8 nominations, but its greatest hopes now lie with Best Original Song. (Warner Bros.)

Faced with dwindling TV ratings, it feels as though the Academy has tried to favour more popular films this year to regain the public’s attention. Looking at the nominations, you wouldn’t be blamed for thinking that 2018 was a particularly poor year for cinema. It wasn’t really, with plenty of strong films sadly overlooked or underrepresented. Perhaps the most egregious case is If Beale Street Could Talk, which scored 3 noms but somehow missed out on the Best Picture and Director categories. You Were Never Really Here signifies another missed opportunity to recognise Lynne Ramsay; instead, Adam McKay charmed his way to a nomination for Vice. What we’re left with is a Best Picture category where, in my opinion, only half of the nominees are truly worthy – BlacKkKlansman, The Favourite, Roma and A Star is Born. Roma should rightly take home Best Picture and Director, though if the Golden Globes are anything to go by (they’re usually not) we could be in for a shock.

In terms of the acting awards, Bradley Cooper should have been a favourite for his role in A Star is Born. He didn’t commit to an extensive campaign however, so he’s an outside bet. It’s upsetting the more you find out about the electioneering behind winning an Oscar, rather than it being based purely on quality of work. Glenn Close will bag what is, for all intents and purposes, a Lifetime Achievement Award in the form of a Best Actress statuette, but we can still hope that Her Majesty Olivia Colman upsets the odds. The biggest disappointment of all though? Considering its US release date fell within the period of eligibility, Paddington 2 should have swept the awards. The horror, the horror!

If there is one thing guaranteed at this Sunday’s Oscars ceremony, it’s a little bit of drama, with no host, controversy all year surrounding new awards, and outrage after it was announced certain major categories would not be included in the live broadcast (of course, The Academy immediately backtracked on this one). In terms of the awards themselves, it seems to be anybody’s game. The wonderful Roma is the current front-runner and a dead cert for Cinematography and Director, but could easily be pipped at the post for the main gong by a surprise win for Black Panther. Best Actor will almost certainly go to Rami Malek for his film-saving performance in the controversial Bohemian Rhapsody, and Best Actress is a two horse race between Glenn Close and Olivia Colman – my instincts are saying a surprise win for the latter British actress. 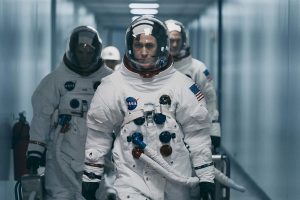 Has The Academy missed a trick in snubbing First Man for the major awards? (Universal Studios)

Personally, the nominations feel a little underwhelming this year. A mere four nominations for First Man (all in the technical categories) is quite frankly outrageous, and whilst it is likely to pick up at least one gong for Regina King’s supporting performance, If Beale Street Could Talk deserved at least a nomination for Best Picture. Early front-runner and personal favourite A Star is Born also looks set to fall at the final hurdle, with its best chance at a trophy now lying with Best Original Song and ‘Shallow’ after initially being lauded as a dead-cert for Best Picture and Best Actress. I’m sure there will be plenty of surprises on the night (and I hope there are for the sake of staying awake…), but expect to see Roma and The Favourite reign dominant.

The Edge's Film Editor 2018-2019. Loves all things football, music and politics, but has somehow wound up writing about the movies.