Read more
You are at:Home»Film»Actor in Focus: Ryan Gosling
By Sophie Trenear on October 6, 2017 Film

He’s one of Hollywood’s most handsome, accomplished, and in demand. He can pull out from the game, do a little indie adventuring and avid baby-making with Eva Mendes, then waltz straight back into the role of Hollywood’s finest like he never went away. At 38, Ryan Gosling is already timeless. Still, he led one of the year’s most celebrated films, sat on the front row at the 89th Academy Awards, and he’ll be at the helm of this year’s Blade Runner 2049, inheriting it from the legendary Harrison Ford. Right here, right now – this is, unequivocally, Ryan Gosling’s next peak. 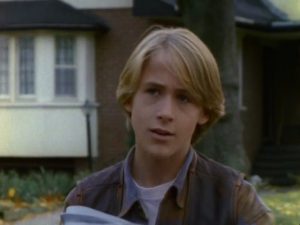 Check those curtains though. Image via Protocol Entertainment.

We could easily say (and I’m very tempted to) that his first peak came with an episode of R.L. Stine’s Goosebumps in 1996, which saw him take on a murderous camera with nothing but his glorious, sun-kissed curtains. Gosling was a proficient child actor, and he actually did a pretty decent job of making the world of family entertainment believe in things like, well, murderous cameras and other hellish technology. So much so that after several other stints of the wholesome viewership variety, he shed his long blonde locks and made the move to “serious acting,” which included a supporting role in the football drama Remember the Titans and the lead role in 2001’s The Believer.

After several well-received performances in minor commercial successes (Murder by Numbers, The Slaughter Rule), Gosling came to the attention of mainstream audiences in 2004 when starring in the romantic drama The Notebook alongside fellow Canadian Rachel McAdams. He termed the role “profound and formative,” and was inspired by the performance of Sam Shepard in Days of Heaven to imbue his character with “quiet strength,” accruing several accolades in the process. 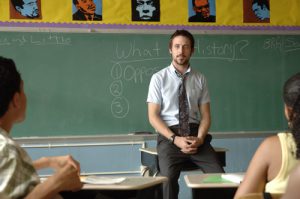 2006 saw Gosling take on the Academy Award nominated role of a drug-addicted junior high school teacher who bonds with a troubled student in Half Nelson, and was universally praised for “a mesmerizing performance… that shows the kind of deep understanding of character few actors manage.” After then starring in Lars and the Real Girl, Fracture, and a split from The Lovely Bones due to creative differences (replaced by Mark Wahlberg after having gained 60 pounds and a generous beard for the role), Gosling temporarily vacated the silver screen. He made an explosive return in 2010, however, starring in no less than five films over the following two years.

Blue Valentine saw him star alongside Michelle Williams in Derek Cianfrance’s directorial debut, a bleak, predominantly improvised drama about the collapse of a once-colourful marriage, and was nominated for a Golden Globe Award for Best Actor. 2011 marked the release of the critically and commercially successful Crazy, Stupid, Love, earmarking his first starring role alongside Emma Stone and the second most successful role of Gosling’s career. After the raw razzle-dazzle of his performance in Drive, the reconciling with on-screen love-interest Emma Stone in Gangster Squad, and another stint with the driver’s wheel in The Place Beyond the Pines, Gosling returned from another two-year break with The Big Short, where he played a charismatic bond salesman and was widely praised for his “somehow simultaneously magnetic and repulsive’ performance.

Now, after the success of 2016’s The Nice Guys and the widespread acclaim for La La Land, which marked his second Academy Award nomination and third gig with Emma Stone, Gosling has little left to conquer. He’s even directed his own (albeit harshly-received) cinematic venture, and headed his own rock duo, Dead Man’s Bones. And with the highly anticipated Blade Runner 2049 just around the corner, it doesn’t seem like he’ll be giving up the crown any time soon. And rightly so – he might be the man of the moment, but Gosling’s proving to be as timeless as it gets.

The films to watch: