An enjoyable, if slightly predictable monster movie that is big on style and generic in substance.

Following in the footsteps of Gareth Edwards’ Godzilla remake, the mighty King Kong has been revitalised for Legendary’s new ‘MonsterVerse’ franchise. In Kong: Skull Island, we see a change of pace from the story we’ve come to know in previous adaptations, with Jordan Vogt-Robert’s realisation of the giant ape perhaps proving to be the best yet.

Described by star Tom Hiddleston as a “classic, old-school monster munch”,  Skull Island removes it’s titular character from the vintage New York scene and names him the king of an altogether more intriguing island; shrouded in mystery and rife with hidden dangers. The film follows two members of a secretive organisation as they piggy-back onto a research expedition to the island, snidely insistent on the accompaniment of a military escort, an SAS tracker and a renowned war photographer.

Once the team arrives on the island however, they soon learn of Kong’s wrath and are divided in the process. With one team desperate to survive and the other hungry for revenge, it’s a race against time as each team battles through the unknown terrain, unprepared for the other surprises it holds in store.

From the very start, Roberts dives in with fast-paced, unrelenting action. Unlike movies such as Jurassic Park, there is very little time set aside for wide-eyed, smiling awe at the island’s wonders. Instead, we are immediately presented with the terror of Kong. Though this is somewhat dizzying to watch – we are transported from the eye of a hurricane to Kong’s explosive, fiery wrath within minutes – the pace moves the story along well, with plenty of jump scares and gasp-worthy effects to keep the audience on their toes. 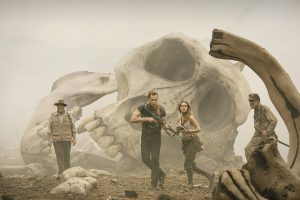 The film’s CGI depiction of Kong is also incredibly realised, presenting a multi-dimensional monster that is as realistic as he is mighty and unfathomable. Far better than Peter Jackson’s 2005 version and a step up from Edwards’ Godzilla, the life that is put into this version of Kong is terrifically engaging. The film’s stylistic choices are similarly very slick and the soundtrack, which features familiar songs from the likes of Bowie, Iggy Pop and Black Sabbath, is also pleasing to hear against the film’s 70s backdrop.

However, the plot advancements within the film leave little to be desired. Despite the change of location and the slight switch-up from the classic story, the plot is still fairly predictable, adhering closely to tired character and genre tropes that have been done so many times before. As with every film about a place untouched by humans – from Avatar to Jurassic World – we are given a hero to rally behind and an obstinate villain who seeks in some way to destroy what is sacred about the place. Skull Island is no exception.

Samuel L. Jackson stars as the vengeful military corporal who is intent on bringing Kong down, while Tom Hiddleston takes on the role of the reluctant hero, herding survivors to safety. There is nothing wrong with this formula of course; the problem here is that the characters are so one-dimensional that you fail to really care about them.

Oscar winner Brie Larson is also horribly wasted here, taking on the all too common trope of the tacked-on female lead who serves no real purpose and is given very little to do. The only character that really succeeds in making an emotional impact is John C. Reilly’s stranded castaway, who provides some much needed comic relief in this very dense, thrill-heavy plot.

Though enjoyable and perfectly functional as a two hour monster movie, Kong: Skull Island is somewhat held back by it’s uninspiring plot and character choices. But if you’re just looking for a film about a giant, angry monkey and some terrifying creatures that look as if they’ve come straight out of Temple Run, you’ll get more than your money’s worth.

Kong: Skull Island (2017), directed by Jordan Vogt-Roberts, is distributed in the UK by Warner Bros, Certificate 12A.