Read more
You are at:Home»Film»Review: Fantastic Beasts and Where to Find Them
By James Barker on November 18, 2016 Film
80%
80
Spellbinding

Fantastic Beasts is in large uplifting escapist fun; but tonally-confused subplots and an extremely troubled conclusion leave the future of the Wizarding World in jeopardy.

Fantastic Beasts and Where to Find Them opens on a familiar site, as we pass through the Warner Brothers logo once more, with Hedwig’s Theme soaring high and heralding us home. It’s impossible for any Harry Potter fan not to feel excited – we’ve done our waiting (5 years of it!), and being back in the Wizarding World couldn’t feel better. It’s magical, joyous escapism from the darkness of the real world.

There’s a definite charm to Fantastic Beasts, which links both to the original Potter movies, and also to a very different yet much loved cinematic setting – 1920s Gatsby-esque New York. The majority of the old team have reunited behind the scenes; director David Yates makes sure to add that Potter dash of magic to his directing, while Steve Kloves returns as producer to steer the ship. J.K. Rowling triumphs in her screenwriting debut, creating a quick-witted yet classy script, which collates all the elements of her much-loved universe and makes a new success out of it.

1920s New York is a rich tapestry on which to paint Fantastic Beasts. It all at once feels like a beacon of progression, with skyscrapers mid-construction, and a traumatised city that jumps at its shadows – its shadows being its increasingly revelatory wizarding community, as war with the Muggles (sorry, “No-Majs”) looks more and more likely. One of Fantastic Beasts‘ strongest features is its ability to highlight very relevant social issues through fantasy – there is talk of banned Muggle and Wizard relationships, a harrowing abuse story between mother and son, and, of course, a subtext campaigning for animal rights. The beasts are beautifully imagined, each different from the last, and their antics are guaranteed to fill the cinema with riotous laughter – they are the movie’s biggest success.

Newt Scamander is a very different kind of protagonist to Harry, and is all the more successful for it; he has none of Harry’s volatility, none of the burden that comes with being ‘The Chosen One’. He is kind and nurturing, with his loving relationship with his beasts more reminiscent of an episode of Animal Park than a Potter film. As it was with The Theory of Everything and The Danish Girl, it’s what Eddie Redmayne doesn’t say that makes his performance so perfect. A small yet abrupt jerk of the head here, the avoidance of a gaze there; he’s just flawless in his portrayal of this awkward yet likeable protagonist. 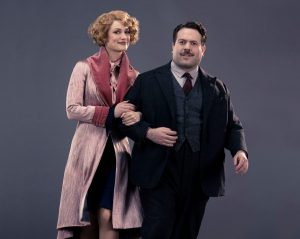 Dan Fogler’s Jacob Kowalski is a better Ron-character than Ron himself; the loveable No-Maj sidekick is the film’s biggest comic relief, but equally is given some emotive, powerful moments. His relationship with Queenie (Alison Sudol) feels rushed and a bit implausible, but there’s definite chemistry between the two characters. Queenie herself is loveable, a Luna Lovegood-esque creation, and her power as a Legilimens allows Rowling to hint at a troubled past between Newt and a Lestrange (shiver). Tina (Katherine Waterston) is sadly the least interesting, likeable and developed of the central quartet. Though Newt and Tina’s future in the Fantastic Beasts universe are pretty much secure, it remains to be seen if we get to see anymore of Jacob and Queenie – fingers crossed, though.

Fantastic Beasts‘ flaws lie largely in its subplots. J.K. and co. try to cram far too much into the film, with not enough time given to the subplots to have us emotionally invested. There’s a plethora of talent that barely feature in the film; Samantha Morton, Carmen Ejogo, and most annoyingly Jon Voight, criminally all playing stock characters that are well acted but underdeveloped. The messy way that Fantastic Beasts continually apparates away from the story of our central quartet destroys the carefully worked tone and pacing of the key tale, Newt’s search to recover his beasts. In particular, the extremely rushed nature of the press and government’s awakening to the wizarding community would be far better saved for a later film, where it can be fleshed out properly – though the violent murder of an overzealous politician in the current climate is always a welcome sight.

Newt Scamander and his friends are forced into becoming the heroes of the film’s final battle, with the reasons for their involvement murkily explained and frankly bizarre. A good film is threatened with ruin in its last half-an-hour, with all pacing going to pot. The film trials off into a thousand and one mini-endings, that even then somehow leave Fantastic Beasts feeling like an unfinished entity in Rowling’s universe, in a way an instalment of the original Harry Potters never did. The entirety of Grindelwald’s involvement in the film (being careful not to reveal spoilers at this point) feels like an afterthought, and I’m not sure that the franchise’s movement away from Newt and his beasts is a good move. I suppose time will have to tell; though, on departing the cinema, I found myself fearful for the future of this treasured film universe, akin to the wizards’ fear for their own world’s future.

Fantastic Beasts and Where to Find Them (2016), directed by David Yates, is distributed in the UK by Warner Brothers. Certificate 12A.