Read more
You are at:Home»Film»Actor in Focus: Eddie Redmayne
By Thea Hartman on November 1, 2016 Film

Winner of the some of the most prestigious film awards within just two years, 34-year-old Eddie Redmayne is certainly one of the actors of the moment, being known and acclaimed for his challenging performances in The Theory of Everything (2014) and The Danish Girl (2015). This November, we are set to see him embark on yet another challenge: he is portraying Newt Scamander, the main character of the latest film which takes place in the beloved wizarding world, Fantastic Beasts and Where to Find Them. Before its release, it is only right that we delve into this charming actor’s career and life.

Born and raised in London, Eddie Redmayne was encouraged by his family to step into the acting universe, taking drama classes from an early age and appearing in various school theatre productions. Redmayne’s first professional performance came in 2002 with the part of Viola in Twelfth Night. The highlight of his theatre career was in 2009, when he starred in John Logan’s Red in London and won the Olivier Award for Best Actor in a Supporting Role and the Tony Award for Best Performance by a Featured Actor in a Play after Red’s transfer to Broadway in 2010.

Eddie Redmayne appeared in many films over the years such as The Good Shepherd (2006), The Other Boleyn Girl (2008) and Hick (2011), as well as in TV mini-series. He gained positive reviews on his performances in My Week with Marilyn (2011) as Colin Clark and in the musical Les Misérables as Marius Pontmercy, anticipating his future success. 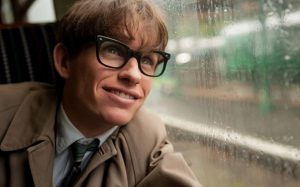 Eddie Redmayne as Stephen Hawking in ‘The Theory of Everything’. Credit: Working Title Films

His portrayal as scientist Stephen Hawking in The Theory of Everything brought him an Academy Award, a Golden Globe, a BAFTA Film Award and a SAG Award, giving audiences a wonderful insight into the existence of a living icon. Eddie was greatly committed to the part, having spoken to Hawking’s medics, ex-wife Jane and the scientist himself in order to convey his struggle with ALS (motor neurone disease) as authentically as possible.

The following year, Redmayne took up another provocative part which brought him nominations for the same significant awards: Einar Wegener, one of the first people to undergo sex-changing surgery.  The Danish Girl depicts Einar’s moving transformation into Lili Elbe, for which the actor did a lot of research, being aware of the weight of the part and its meaning to the LGBT community. 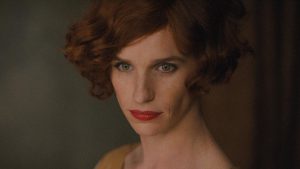 As a fan of J.K. Rowling and director David Yates, Eddie Redmayne is extremely excited about the expansion of the Potter universe, Fantastic Beasts and Where to Find Them, declaring his admiration for Rowling’s first screenplay and his fondness of Newt Scamander, a Hogwarts-expelled ‘magizoologist’ whose adventures in New York will take us on a new and magical journey. This powerful part is safe in Eddie’s hands and I am sure he will live up to the expectations of the eager fans.

Fantastic Beasts and Where to Find Them (2016), directed by David Yates, is due to be released by Warner Bros. Entertainment on 18th November.