Welcomed to the stage with a surge of thundering applause, Mr. Ken Loach, recipient of this year’s inaugural Raindance Auteur Award, took his seat for the Raindance Film Festival conversation.  Hands clasped, head bent, he barely showed any teeth in what appeared to be just a polite, cordial smile. His eyes glanced above the rim of his glasses to survey his audience, but they quickly darted back down again to shake the hand of Jason Solomons, acclaimed author, film critic, and his interviewer for the next hour and a half. Ken Loach- the man, the maker. Never did a man seem so reticent. And then he opened his mouth…

Loach has spent the past fifty years making some of the rawest, era-defining, and unequivocally angry films of the past century, and he’s just released his most angry film yet. I, Daniel Blake, winner of the Palme D’Or at Cannes this year (Loach’s second addition to his collection), follows a man chewed up and spit out by the British benefits system. Recovering from a near-fatal heart-attack which deems him unfit for work, he finds himself in the stickiest of situations, his Jobseekers allowance reaching suspension as he is found to not be trying hard enough to find the work he is unfit to do. 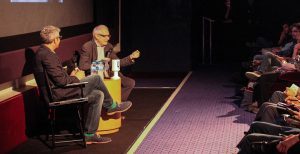 Loach is no stranger to such bitter ambiguity and murky waters of poverty and homelessness, having filled his ballooning repertoire with social critique and socialist ideals. “We never talked about the metaphorical level of it, we just dealt with it in practical terms,” he remarked, forehead furrowed in discussion of his 1970 masterpiece Kes. Bleak symbolism runs through a Ken Loach film like milk through a straw, Kes being a prime example and a knowing example, even then. “There was a number of contrasts, really,” he observed, “there was the boy who had only one future prospect which was to become an unskilled labourer, and the bird who was flying free; and the probability that for Billy’s life, he’d be underground whilst the bird was in the sky.” 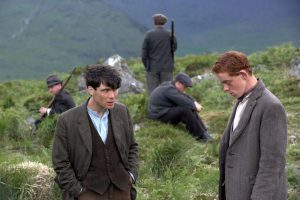 2007’s  The Wind That Shakes the Barley. Image credit: Pathe

“The interesting thing was that Barry’s idea in the book [Barry Hines, author] was that every kid in the class has got something to offer, something special”. This is an ideal which Loach has carried on his back throughout his career. “Everyone has something to offer, and we try to find people – we do find people – where we’re doing the film, and we just look in unlikely places. And you might struggle sometimes to find the right person, but everyone who comes in is interesting and has something.” In fact, it’s an ideal which Loach considers inherent to his work, and an ideal which his inflating audience consider quintessential upon stepping into the cinematic realm of Loach himself. One of the most political Western modern directors, it’s an ideal which he has moulded in many varying forms, but not all, in fact very few, have been received well by an entire audience. Speaking about The Wind That Shakes The Barley, arguably his most infamous effort, Ken quipped “There was a bloke in The Times that said, and this is a test for the cinema buffs here, that I was a worse propagandist than Leni Riefenstahl.” He pauses, “Another in The Telegraph once wrote that ‘I haven’t seen the film. I don’t want to see the film because I don’t need to read Mein Kampf to know what a louse Hitler was.’” He laughs.

“But the question about The Wind That Shakes the Barley wasn’t ‘are the British colonizing Ireland’ and taking its wealth and oppressing the Irish people, the question is ‘is this unfair?’” – it was clear from Loach’s flying hands, wild and unclasped, that that is a question which runs, doubtlessly, through the veins of Loach’s repertoire.

As one of the foremost stylistically known auteurs of cinema, a “love affair with cinema”, as he puts it, is a fair assumption to make if we consider his half-century long relationship with the medium. “If you see the medium as a mechanism simply to express a political idea, then forget it,” he warned, “it doesn’t work. You’ve got to love the medium.” The audience tenses, a room full of filmmakers feeling the advice drift over them, each swept up in their own complex love affairs with cinema. 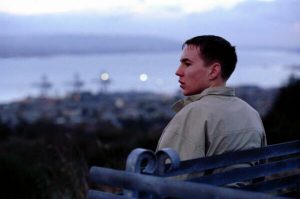 Commenting on his 2002 effort Sweet Sixteen, he mentioned his tendency to leave actors in the dark about certain chunks of the script to harvest the most realistic reactions. “I think if you’ve read what’s going to happen six weeks in advance, you don’t get that shiver down the spine when a real shock happens. Sometimes there’s been cases where the actors have done something else than what we’ve anticipated,” he remembered, “and sometimes they’ve actually been right and we’ve have to amend the script. Their instinct is the most valuable thing for a director. If you can work with an actor’s instinct and connect to it and let them be in touch with that – that’s the most creative way of working with them.”

As the evening wrapped up with ardent discussions about Loach’s latest, he recalled the film’s conception: “Paul and I saw stories all the time and we found ourselves exchanging notes about people who were being sanctioned or being passed over work when they should be working, and the rising food banks, and the stories were just getting more and more extraordinary, so we thought we should look into it really.” He paused, thinking. “I think that cinema can show us the world, and often cinema shows us the world as very distant and exotic, but it doesn’t always show us the world around us.” His face buzzed electric. He knows he’s done exactly that.

And with a fitting final question from a young, wide-eyed audience member asking for advice for his generation, the new generation of filmmakers, Ken looked him directly in the eye, pauses and says “you just do what you feel compelled to do. You’ve got to do whatever burns you up. The film you can’t not make is the one you’ve got to make”.

And as Ken stood up to accept his award, to the roaring applause of his standing ovation, before these 200-odd people broke into a round of ‘Happy Birthday’ to celebrate Ken’s recent 80th, his last words couldn’t be more fitting: “The first time I came to Raindance, it was really scruffy. I’ve just been to the momentum events in Liverpool and they’re scruffy. But my god, they’re so full of energy and ideas and commitment to change. And if there’s one thing as filmmakers we need to be involved in the dynamism of society, to really take part in that as filmmakers and citizens, that’s it. So here’s to scruffy festivals, and creative energy.”