Read more
You are at:Home»Film»Films to look forward to at Fright Fest 2016
By Ash Millman on August 22, 2016 Film

In less than one week, the August bank holiday will have rolled around for another year – signifying ice creams, family days out, and of course, five days of blood curdling horror. Fright Fest 2016 launches on 25th August, and has a whole host of events and films to keep you out of the sun this summer. With 66 film premieres, 26 international short films, over 200 guests and everything from horror writing workshops to specialist panels – it’s set to be a spine-tingling extravaganza.

With six cinema screens hosting different films throughout the event, there’s plenty to choose from – whether your preference lies with body horror or creature features, scream queens or psychological thrillers. The Horror Channel, Splice Media, and Arrow Video all have their own screens for larger features; and then three discovery screens pick up the rest. Debut British filmmakers and industry professionals appear in the smaller line-ups – so you get your money’s worth with a variety of film-related fun.

So how do you navigate the gory mass of movies before you? Well, the guide below is a start. Outlining the best of each day’s film line-up, you should be whizzing your way around VUE cinema in no time. 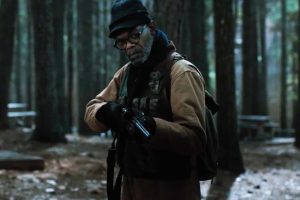 European premiere of My Father Die, the UK premiere Cell, and the world premiere Let Her Out. A solid line-up all around, each promising different scares. If you can only see one – make it Cell, the adaptation of Stephen King’s novel, starring John Cusack and and Samuel L. Jackson. Based around a zombie apocalypse that has swept the Earth, Tod Williams directs the most real visualisation of brain-hungry monsters yet. Why? Because humans have been turned into shuffling shells by a powerful mobile phone signal. Not quite as gimmicky as it sounds, best-selling author King is sure to offer another classic horror narrative for the screen.

Friday is where the full schedule kicks off – with all six screens showcasing content for the first time. The main three will be screenings of From A House on Willow Street, The Chamber, Mercy, They Call Me Jeeg Robot, Pet, and White Coffin. The latter, an Argentinian horror from Daniel de la Vega, is described as ‘a grisly supernatural shocker’ with ‘deft Hammer homage, potent Roger Corman references and nostalgic WICKER MAN chills.’ Those are some pretty big claims. Following a desperate mother given a second chance at life, this resurrection thriller holds lots of potential.

On Discovery Screen 1, The Devil’s Candy ends the evening – a horror about a metalhead family fighting against foreboding evil forces. From director of The Loved Ones, Sean Byrne, the English premiere looks to be as raucous and twisted as its soundtrack. Discovery Screen 3 also has an exciting end to the evening, with a ‘Special Surprise Screening’ being the only thing denoting what could be on offer. Allegedly in the vein of 28 Days Later, the world premiere slot could be an interesting gamble for those willing to give it a go.

Abattoir, The Master Cleanse, The Rezort, Beyond the Gates, Blood Feast, and Sadako Vs. Kayako screen across the three main cinemas on Saturday. Boasting Big Bang Theory‘s Johnny Galecki, graphic novel adaptations and revamps of 60’s classics – Saturday is a strong contender in the FrightFest line up. However, there is one that stands out amongst the cannibals and corpses – Sadako Vs. Kayako. Combining the two biggest names in Japanese horror, the entities of both The Ring and The Grudge battle it out on screen as ‘the ultimate face-off exorcism begins.’ 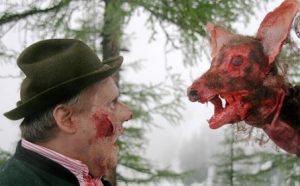 The first of the Short Film Showcases also appears today – premiering sinister hairdressers, black comedy, and sci-fi rebellion. It’s a good one to catch for a mix of all the different things on offer in a bite-sized slot, with seven films making the cut for this first round. If shorts aren’t your thing, then next up on Discovery Screen 1 is Attack of the Lederhosen Zombies – which is about as high brow as you can get. It looks great fun, with the line between ‘zombie and just drunk’ being blurred as revellers take refuge in the all night ski party being held on the mountain. Snow, skiing and slashing – what more could you want?

The penultimate day holds a mixed bunch, as alongside the main screenings, a host of non-filmic events are taking place. Outside of the cinematic bill, there is a women in genre panel, a special effects showcase, a discussion on the future of British horror, and James Moran is hosting his own ‘Horror Writing Masterclass’ for those that like to indulge in their own creative scares. Whilst the latest spooky releases are obviously the draw of the festival, these extras provide something special – a real insight into the industry. Discovery Screen 3 will be hosting all the aforementioned events throughout the day.

Returning to the films, SiREN is a name to watch out for on Sunday. An adapted, feature-length version of the popular V/H/S short ‘Amateur Hour’, the hostesses take the big screen for their own. Alongside this, on the main screens, Chilean thriller Downhill brings BMX scares as two bikers ride for their lives against a demonic cult. Broken, Johnny Frank Garret’s Last Word, Realive, and 31 also show.

The last day of the festival is set to go out with a bang, showcasing some of the best horror to keep you awake at night until the next August rolls around. Under the Shadow screens first thing in the morning to get you well and truly woken up, as it comes hot from Sundance as a festival favourite. Babak Navari’s feature debut brings the Iran-Iraq war into the spotlight – exploring the bond between mother and daughter as a sinister force threatens to come between them.

On the main line-up, Red Christmas and Train to Busan finish up the night – with the former being an Australian comedy-horror on a Suspiria bender. The latter, a UK premiere and Cannes Midnight Movie 2016, is a Korean zombie film with plenty of bite. Trying to keep his daughter safe on a perilous journey to Busan, the infected have made it aboard their train and ensuing chaos is released. A suitable ending for all the commuters heading back home via public transport afterwards!

FrightFest tickets are available now from the official website. To purchase tickets or view the full schedule, visit www.frightfest.co.uk.