Read more
You are at:Home»Film»Actress in Focus: Rachel McAdams
By Sophie Trenear on August 16, 2016 Film

Rachel McAdams, one of the biggest rising actresses of modern cinema, really is something special. All too often actors and actresses will be forced into certain stereotypes, certain tropes and roles with the same old vibes and the same character arcs. But in a world full of Harrison Fords, Bruce Willis’s, and Jenifer Anistons (as grateful the world of film is to have them), it’s refreshing to have stars who can, and often do, play very different roles showcased for our viewing pleasure. Rachel McAdams is luckily one of those stars-a healthy dose of variety in a world where often only predictability and regularity sell, and whilst she is often typecast into the role of the ‘romantic interest’, her capability for branching out still strives to make her stand out.

An early McAdams in ‘My Name Is Tantino’. Image via google.com

McAdams first ducked into the world of film all the way back in 2001 with the Canadian-Italian film My Name Is Tanino at age 22 before earning a Genie Award nomination for her part in Perfect Pie. A year later, she was pulled into the razzle-dazzle world of Hollywood with The Hot Chick, in which she played a catty high-school student who swaps bodies, à la Freaky Friday, with Rob Scheider’s criminal character, a role which she describes as being a “huge milestone” in her career.

Cut to 2004 and Regina George rears her head, McAdams playing the meanest, most popular queen bee of them all in Mean Girls. For her role, McAdams won two MTV Movie Awards, along with comedienne legend Tina Fey’s admiration (Fey, who wrote the screenplay for Mean Girls credited McAdams with teaching her how to act in front of a camera rather than an audience), and the world’s adoration. The latter could only be furthered when later that year she starred opposite fellow Canadian Ryan Gosling and stole an incalculable number of hearts with The Notebook, playing Allie Hamilton, a wealthy southern belle who embarks on a forbidden affair with Gosling’s Noah Calhoun. Interestingly, although McAdams and Gosling were romantically involved in 2005, they failed to get on with each other during filming. Gosling even asked director Nick Cassavetes to “bring someone else in for my off-camera shot” because he felt McAdams was being difficult. Nevertheless, McAdams was highly praised for her performance, even being declared as “a real discovery” by critics.

After taking a short two-year hiatus in 2006, she returned in 2008 with the 1940s film noir Married Life for which she was praised for her natural vivaciousness and effortless glamour but was criticised for how the film appeared to hold her back, despite McAdams herself noting that Married Life re-inspired her to continue working more often again. 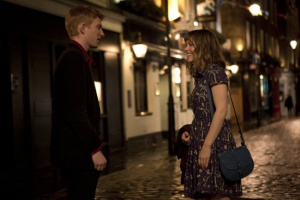 Domhnall Gleeson and Rachel McAdams: a chemistry to rival that of Milo and Otis. Image via google.com

2009 saw McAdams star in the infamous The Time Traveller’s Wife, a commercially successful but critically denounced sci-fi romance film based on Audrey Niffenegger’s book of the same name. McAdams stars as Clare Abshire, the wife of a man with a paranormal genetic disorder which causes him to randomly travel in time. She was initially reluctant to take the part, given the fact that upon reading the book most people had “already cast in their heads” the part of Clare.

Her performance was praised as luminous yet wasted within the confines of the somewhat listless film, but McAdams was to go on to delve even more into the time travelling world, starring in mainstream projects like Sherlock Holmes, and Woody Allen’s Midnight In Paris as in late 2013. McAdams then starred opposite Domnhall Gleeson in Richard Curtis’ About Time, another film involving elements of time travel, an element which emphasised the film’s theme of living in the moment. The film was critically acclaimed, with her on screen chemistry with Gleeson being outstandingly praised for its vibrancy and radiance. 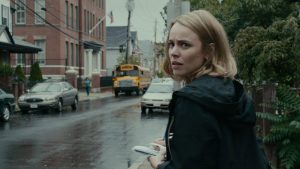 McAdams in the spotlight in ‘Spotlight’. Image via youtube.com

2015 saw McAdams blanketed with critical acclaim and major award nominations for her role as Sacha Pfeiffer in the award winning Spotlight, which won Best Film at the 2016 Academy Awards. The film, which illustrated the dark truths of the child-abuse scandal in Boston’s Catholic Church from the perspective of the Spotlight team at The Boston Globe, saw McAdams opposite Michael Keaton and Mark Ruffalo. McAdams herself was drawn evermore into acclaim from critics and audiences alike as a result of the film.

After starring in films such as Aloha, Southpaw and Every Thing Will Be Fine, McAdams was announced to be starring in upcoming Marvel film, Doctor Strange opposite Benedict Cumberbatch. The critically anticipated film will mark number fourteen in the Marvel Cinematic Universe, and follows Cumberbatch’s eponymous character after he’s involved in a career ending car accident and encounters ‘the ancient one’ who steers him towards the dark arts. McAdams is set to play Christine Palmer, a fellow surgeon and friend, and will, I’m sure, head on to even bigger heights in years to come.

My Name Is Tanino, Southpaw, Midnight In Paris and About Time. And obviously rewatch Mean Girls. Do you even need an excuse for that?